Ana Teixeira Pinto (theory tutor@DAI) writes us: " Mamadou Ba was indicted for libel in Portugal for calling a neo-nazi leader "murderer." This neo-nazi leader was convicted for his involvement in the racially motivated murder of a young black man, Alcindo Monteiro, who was beaten to death in the center of Lisbon. The indictment comes on the heels of a year-long judicial harassment campaign. I know Portugal feels remote and you are busy but international solidarity is very much needed here." Click for the relevant information about the blatant persecution by judicial authorities against an anti-racist and human rights activist and express your solidarity ! 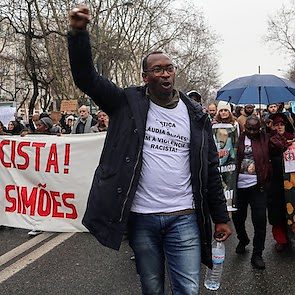 Send a short video, audio or written statement to the email boispelosnomes@gmail.com

Who is Mamadou Ba?

He is an anti-racist activist of Senegalese origin who has lived and worked in Portugal for 25 years where he obtained nationality. He is currently attending a doctoral program at a North-American university. A leader and spokesperson for the portuguese association SOS Racismo, Mamadou Ba is an active voice in the public debate on the origins and realities of racism and is part of a generation of black activists who discuss the country's colonial responsibility with its long-lasting effects. His public exposure makes him a target for far-right organizations and he is often threatened by them. Because of these threats he once had to live under police protection.

What is the complaint about?

In 2020 the neonazi Mário Machado accused Mamadou Ba of calling him the “murderer” of Alcindo Monteiro. Alcindo Monteiro was a young black Portuguese citizen, born in Cape Verde, murdered in 1995 by a group of neonazi skinheads. Mário Machado was one of the group members that killed Alcindo Monteiro.
The indictment of the Portuguese public prosecutor, taken by judge Carlos Alexandre, that decided to take the anti-racist activist to court, questions, “Can a person carry an anathema all his life, imputing to him the participation, in any capacity, in a homicide, whose deed has already been introduced in court and object of a thorough judgment and with the judgment of the supreme court of justice, where he is acquitted of this specific crime, but condemned by another? And call that freedom of speech?". The judge further states, addressing Mamadou Ba, "What it cannot do is substitute itself for the courts and invoke the right to freedom of expression".
The neonazi is claiming for compensation for moral damages.

When will the trial take place?

The exact date for the trial is not yet known. It may take weeks or months but given the speed that the judge demonstrated in the pre-trial phase, we believe that the trial will be scheduled quickly.

What can happen if Mamadou is found guilty?

Who is Mário Machado?

Mário Machado is a Portuguese neo-Nazi, founder and former leader of the Frente Nacional, a former member of the Hammerskins Portugal group and founder and former leader of the nationalist movement Nova Ordem Social, suspended in 2019.
Mário Machado's national notoriety as a nationalist, bonehead and far-right leader has been aided by the largely sensationalist coverage of the Portuguese press.
Mário Machado has a long criminal record, which includes racial discrimination, bodily harm, possession of illegal weapons, defamation, kidnapping and extortion. He was also a suspect in the murder of Alcindo Monteiro.
The murder of Alcindo Monteiro – the facts
On June 11, 1995, Mário Machado took part in actions of violence against several black Portuguese citizens in Bairro Alto, Lisboa.
Mário Machado was part of the group that murdered Alcindo Monteiro, a 27-year-old Portuguese citizen, born in Cape Verde.
In the early hours of the morning, Alcindo was violently beaten in the Chiado area by a group of nationalists, who had come from a dinner commemorating the Day of the Race, the name given during the Portuguese Fascist Regime to the Day of Portugal, celebrated on June 10.
Alcindo Monteiro was found unconscious on Rua Garrett, being transported to the Hospital de São José, along with nine other victims of aggression, all black. Alcindo Monteiro died that night.
At two-thirty in the morning, the police captured nine individuals (seven boys and two girls) near Cais do Sodré. Among these was Mário Machado, then active-duty soldier, 2nd Corporal of the Air Police of the Portuguese Air Force.
On June 4, 1997, Machado was sentenced to four years and three months in prison for his involvement in the death of Alcindo Monteiro.
Recently, and a few days after the court decided to take Mamadou Ba to court for defamation, the public Ministry accused Mário Machado of a crime of incitement to hatred and violence and of a crime of possession of a prohibited weapon. The accusation follows a murder case on August 23, 2019, next to a nightclub in the Algarve. The alleged author of the deadly shots was a young black boy. In the following days, Mário Machado used his social networks, publishing messages urging all far-right members to look for the suspect and hand him over to him, with the objective of taking justice into his own hands.