Urak dakar (Water carries) is the new edition of our partner Bulegoa z/b's programme Space is the Place / The Place is Space. Begun in 2018, the program title paraphrases the 1974 Afro-futurist film by Sun Ra. The encounters are comprised of a series of talks and performances that will take place on 18-19 November at Bizkaia Aretoa-UPV/EHU. A film programme hosted by the Zinebi 64 film festival will be presented on 16 November at the Auditorium of the Guggenheim Bilbao Museum. Among the artists and speakers you will encounter many friends and guests of DAI: Kodwo Eshun & Louis Henderson, Denise Ferreira da Silva, Sara Alberani, Itziar Okaritz and last, but not least our amazing alumni Sofia Montenegro (DAI, 2019) and Giulia Crispiani (DAI, 2017). 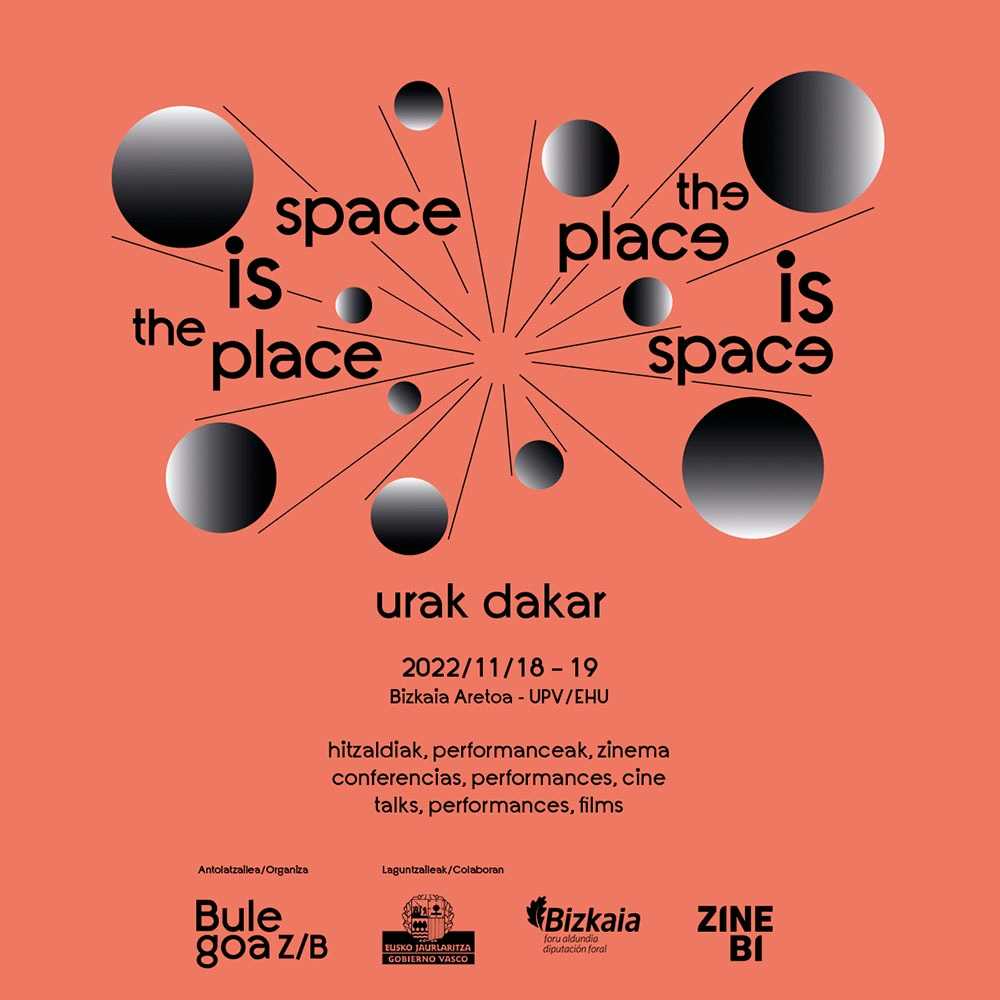 The estuary is not a river. It is a meeting place. A place where waters meet: the river’s, as it follows its course, and the sea’s as they wash inland.
At a certain point the river turns from being a river into a place where the sea penetrates inland, an estuary. The tongue of salt water is subject to the action of the tides. When the tides rise the water seems to run upstream, as if time and gravity were moving against all logic, backwards, like on a Moviola. The contradiction is apparent: an estuary (ría) is not a river (río). Upstream or downstream, the waters are still flowing.
The gravitational forces of the Moon and the Sun create and rule the rhythms of the tides on an estuary. Their time is cyclical. The tides care nothing for the past, present and future of cyclical time.
While the waters of the Bilbao estuary follow the tides and their cyclical rhythms, its riverbanks submit to the impositions of linear or historical time. The Abandoibarra area –the epicentre of the urban transformations in the city at the end of the twentieth century that gave rise to what became known as the “Bilbao effect”– today is the site of a museum, a university auditorium, a university library, a conference hall, a skyscraper, a shopping centre, a hotel and several luxury homes. Thirty years ago, one could find a shipyard, a container terminal, warehouses and a number of loading cranes. Several decades before that, some of the dockyard equipment shared the site with a shanty town built by migrant workers searching for a living.

The autumn programme of Urak dakar takes its inspiration from the Afrofuturist strategy of using fiction as a tool to disrupt temporalities to make way for new readings of history. The encounters and film programme tackle issues such as the structural violence of capitalism and its colonial past, or the potential of memory and collective action. Both events will take place at Abandoibarra, an urban area whose industrial past has been erased and substituted for the shining surfaces of new buildings. Bulegoa z/b wanted to make the most of this circumstance to try to think in situ, in the space and about the place.