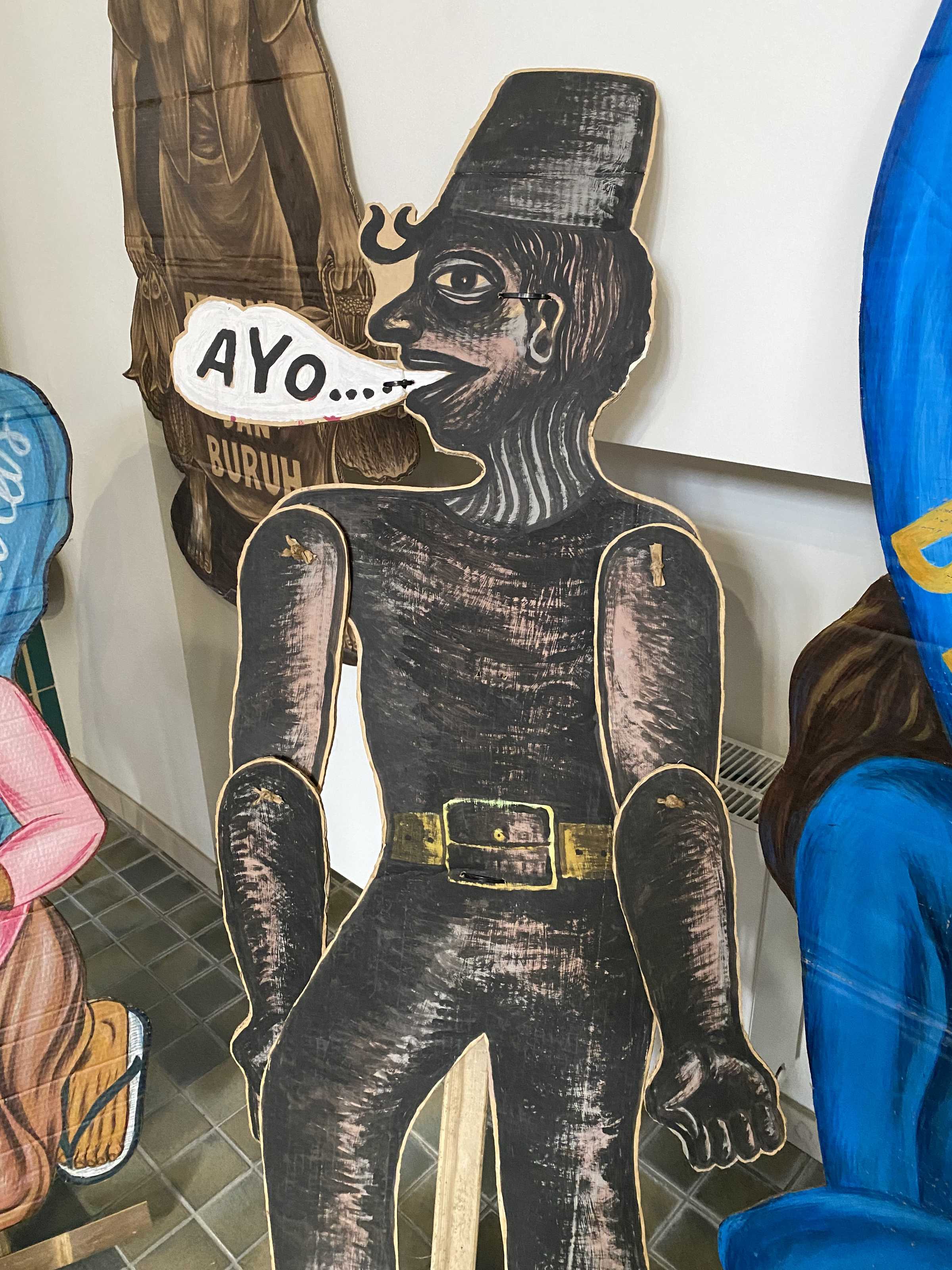 "This seminar critically engages with the politics of communication and communicability (and the differences between them) in relation to standardized measures of the world and their regulatory and corrective functions. It delves into the forms and formations of linguistic value and signification, the function of the sign, the word; in other words, what we say is “the world” and how and why. It seeks to engage with practices of unsaming the given name, the “given” included here are ideas, signs, words, meanings, discursive forms, whilst paying close attention to the different power dynamics and historical materialities of communication, contexts, measures and values.

Building on my research on the politics of anticolonial Indonesian paralanguage, the course will think through questions of what I term, for the time being, incommensurable issuances. Incommensurability points to questions of measurement and comparison, (in mathematics the incommensurable is the irrational, the disproportionate, the appearance of a lack of common measure) and issuances (among many other things which we shall discuss in class) are emanations, expressions, derivations, circulations, distributions, editions, publications, writings, effluxes, escapes.  What is at stake here are elements of “ch-ch-ch-ch-change” to cite David Bowie. In other words, not saying the same is to not stay the same, or to question what we mean to be the same, the common, and common sense, a common world, by way of issuing forth, bodying forth antifoundational noise, a deepening of material particulars and practices - ch- ch- ch- ch- ch - and turning to face the strange. The strange here though is not posited in opposition to the ‘normal’ but rather functions as an ante-anomaly, the antecedent anomalous that operates by way of, within, and against, the incommensurability and irreducibility already inherent to measure, a resistance prior to power.

The class will explore different aesthetic, cultural, social expressions and practices of unsaming the name, or unnaming the same. For our first seminar we shall read Theresa Hak Kyung Cha’s DICTEE to think through the materiality of language and the politics of dictation and reiteration. In DICTEE errors and unstable forms undermine colonial linguistic hegemonies. This Cha does primarily through the mobilization of sound. For our second day of study, we will read and listen to the sounds of self-described ‘blk animal, stutterer, artist’ JJJJJJerome Ellis’s song book The Clearing to think through dysfluency, the refusal of the standard temporal measures of speech acts, the differential repetitions of corporeal language making processes.

This deepening of the particular materialities that make up language and communication will turn to engage with ruangrupa’s Lumbung and the right to noncommunication, the right to refuse what has been refused. Ana Texeira Pinto cites Farid Rakun (member of ruangrupa) in her invaluable take on the shenanigans at documenta 15, in the piece titled “This is why we can’t have nice things!”: “Quoting Toni Morrison, Farid Rakun contended that the function of racism is to ‘keep you from doing your work. It keeps you explaining why you are the way you are.’” This politics of explication and translation as tied to expected measurement, to an accepted naturalized standard way of doing things, the call to perform otherness only within accepted parameters, is one bound to the Enlightenment’s project/ed rules and conventions. Arguably, what some people hated about documenta 15 was the deepening of the participating collectives’ particular doings in spite of, and inconceivable, incommensurable to, dominant art worlds’ rules and conventions.

Through a deepening of our study of questions of meaning and representation and the controversies as they unfolded, we will read the Lumbung participants statements, Ana’s text, Elizabeth Povinelli on incommensurability and inconceivability, Brian Massumi on the politics of noncommunication, and Ocean Vuong on the refusal of translation. This then leads to the sign “world.” The world is not a given, naturalized category. We shall engage with Tyrone Palmer’s reading of Aimee Cesaire’s anticolonial demand for the end of the World, and Fumi Okiji’s Jazz as Critique to think through how the aesthetics of the north American black radical tradition is a critique of the world. We will also visit Paolo Virno’s new book on the idea of world and use.

Implicitly, and perhaps at times explicitly, all the above questions pertain to notions and practices of freedom. Once again, much like the problems we trace when we critically and necessarily distort the sign “world” we will ask: What do we mean when we say freedom? Maggie Nelson’s treatise on freedom in her recent book of the same name, and especially the chapter titled “Art Song,” and the intertwining of care and constraint will be discussed. We shall also be thinking closely with Danielle Goldman’s work on improvisation as a practice of freedom always bound up to shifting terrains of constraint and tight spaces in her book I Want to Be Ready. Incompletion, liberation and abolition will also be thought of together by way of a reading of Harney and Moten’s All Incomplete.

Another term that we will put under pressure is the word “queer.” In Poor Queer Studies Matt Brim insists on a trenchant class critique of queer theory. Together with Shola Von Reinhold’s novel Lote we will engage, by way of the “queer use” of the term queer (to think with Sara Ahmed), the sign and the necessary destabilizing of this sign through a class analysis. Finally, we shall consider the ways in which incommensurable issuances are bound up with a politics of vibration and energies and discuss the book The Politics of Vibration: Music as a Cosmopolitical Practice by Marcus Boon with readings on practice by Boon, Moten and others. (Again, what is the cosmos here?)

An analytic lens for the studying of the abovementioned will be a “conjunctural analysis” as articulated in Stuart Hall’s and Lawrence Grossberg’s work in Marxist cultural studies. In other words, a conjunctural analysis is one in which the aesthetic, social, political and cultural issuances we will study are always to be historicized, or as Jeremy Gilbert writes:

“The importance of thinking about ‘the conjuncture,’ of ‘getting the analysis right,’ was one that Stuart Hall frequently emphasized to his students and interlocutors. The importance of mapping the specificity of the present, of situating current developments historically, of looking out for political threats and opportunities, was always at the heart of Stuart’s conception both of ‘cultural studies’ as a specific intellectual practice, and of the general vocation of critical and engaged scholarship in the contemporary world. For cultural studies in particular, he understood this approach as steering a course between the two extremes that he saw as characterising too much work in the field. At one end of a continuum, he saw a tendency to theoreticism: overly abstract speculation, engaged in theoretical innovation for its own sake, rather than for any obvious analytical gain. At its most extreme this tendency manifests itself as a pure speculative philosophy that only uses cultural ‘objects’ as illustrations for its generalised theses. At the other end, he also decried an excessive particularism–textual analysis, descriptive ethnography–that made no effort to situate or explain its objects of study with reference to any wider set of social relations or historical tendencies. He was careful not to imply that all–or even most–contributions to cultural studies should be seeking to map an entire ‘totality’ of social relations at a given moment. But he did insist on the crucial importance of the question ‘what does this have to do with everything else?’ when examining any phenomenon, however minute.” (Jeremy Gilbert, “This Conjuncture: For Stuart Hall,” New Formations, 2019)

This is a very good question I believe. And one to keep in mind going forward. What happens though when what something has to do with something else is incommensurable. In other words, although resonances and affiliations and solidarities can be sensed and performed by way of a paradoxical openness to paradoxical incommensurabilty, what are the measures of the world we presume to already share when we engage in comparison?

This is where perhaps performance studies moves away from cultural studies. I’m still thinking this through. For example, let us now watch and listen to the song “Compared to What.”

Les McCann, Eddie Harris, and Benny Bailey, "Compared to What"

I would hope that my preamble to the seminar’s concerns and our collective engagement with this performance has made it clear that any categorical determinations, preconceptions and projections placed on it, any fetishizations, are determined by way of aesthetic criteria understood as natural but thoroughly constructed and historically materialized through the ongoing forces of racial capitalism. This is where a conjunctural analysis is helpful. But what are the limits of this historicization? To repeat: What of the incommensurables? For instance, following a conjunctural cultural analysis, it is important to say that the song, though it feels so relevant today, was written in the late 1960’s by Eugene McDaniels, during a period of civil rights movements, uprisings such as in Watts, LA., the assassinations of Martin Luther King, Malcolm X, and the Vietnam War. But a history of the 1960’s in the US is inseparable from the centuries-long epochs of imperialism, enslavement, genocidal colonization and militarized capitalism’s disenfranchisements. For times sake, this is a simplistic conjunctural analysis here, with the hope that we will engage with this performance further in class. One would also have a lot to say about where this performance takes place: in 1969 at the Montreux Jazz festival on the lake shores of Geneva and how the performance takes place which I’ll get to later. But most importantly for now: How does this performance at one and the same time inhabit as well as exceed historical conjunctures? In other words, how is it always already irreducible to interpretation? Furthermore, the performance lasts for more than 8 minutes. The temporal measures of presentations, the time we relegate to paying attention to particular things, are necessarily put to question. And lastly, before we press play: please closely attend to the incommensurable issuances of pianist Les McCann, saxophonist Eddie Harris, and Benny Bailey’s trumpet. As Fumi Okiji writes in Jazz as Critique (citing Theodor Adorno), jazz as socio-musical theory and study critically reflects on the contradictions from which it arises and “rejects ‘categorical determinations stamped on the empirical.’” It “shows a gathering constituted by the play, the wrestling and cooperation, of disparate parts.” This is not about a speculating “on a utopian alternative… but rather… a state of constant rejuvenation through the unstable, generative gathering of its disparate ways.” (6).

I will end here by saying that this performance was unplanned, unrehearsed and improvised. Prior to their gathering, the Eddie Harris Quartet and The Les McCann Trio had separate performances at the festival. McCann and Harris wanted to play together. And invited Benny Bailey to join them. So now, we can watch it together differently once again…

To close: What we have just watched and listened to together can be understood as affirming, to cite David Lloyd on Fred Moten’s Stolen Life: “a procedure, the sheer generative performativity of improvisation itself as it brings into being some new state of play out of the fugitive encounter of constraint and invention in and through the interdependence of the ensemble. Everywhere Moten insists on this performativity of a blackness that is not an ontological essence nor an originary identity but a constant process, a performativity that is necessarily non-performance insofar as it is never subjected or given over to institution, to the dismay of interpretation.” (Lloyd, “The social life of black things: Fred Moten’s consent not to be a single being.” Radical Philosophy 207, p. 83)

This seminar will try to keep it real, compared to what?"

This text was presented by Hypatia during DAI's Introduction Week at PAF, October 2022.