This short text has come out of the performance LIKE NOW (WOULD BE GOOD) by students of the Dutch Art Institute, that took place on July 6, 2011 in Arnhem, in the parking lot in the Kortestraat, opposite of where the DAI was located at the time. It was part of the programme It Takes More to Stop Us, DAI's end of year presentations 2010-2011. 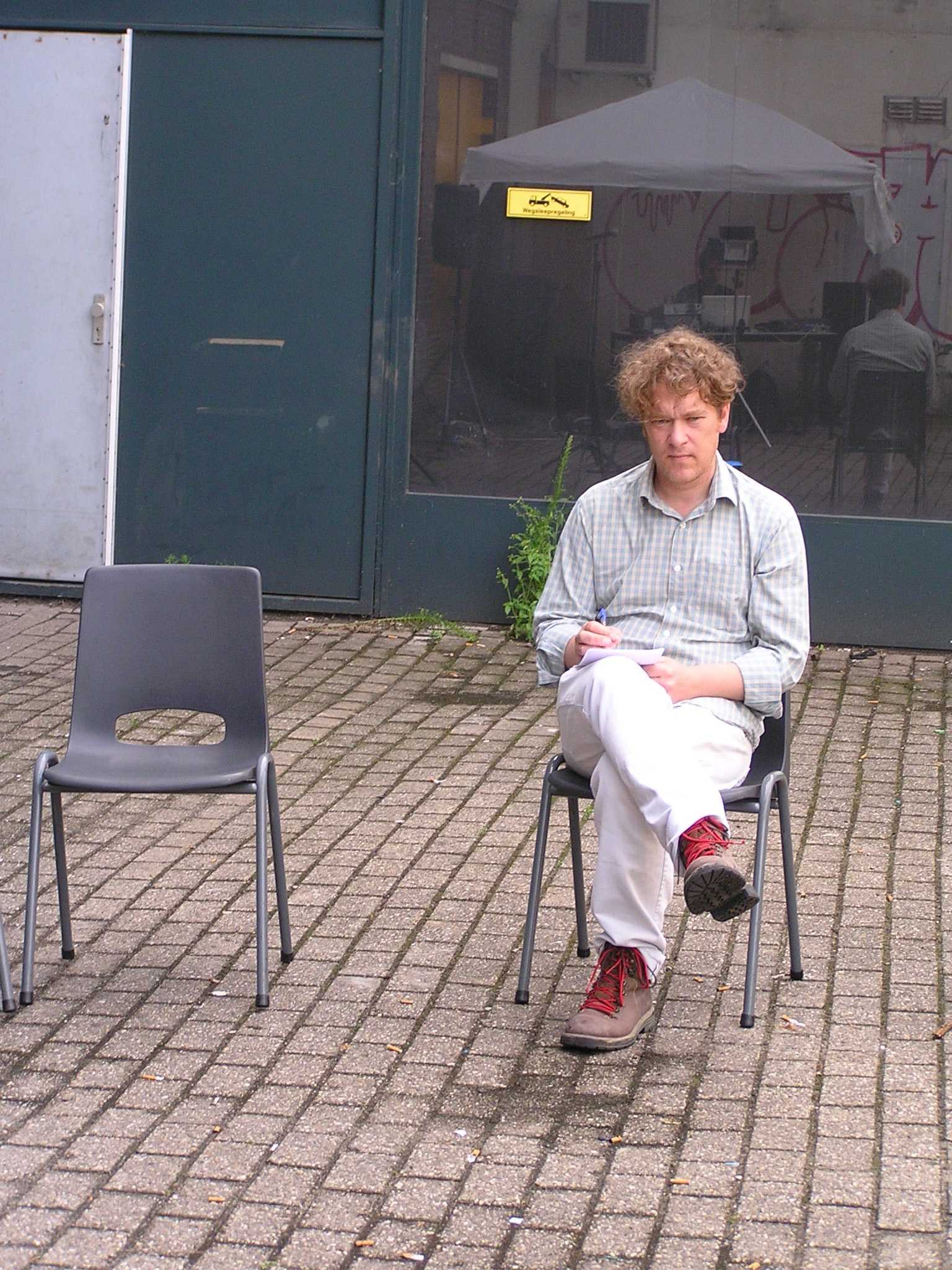 Over the period of a year, the artist Phil Collins worked with a group of DAI students as their tutor within the framework of a project curated by If I Can't Dance, I Don't Want To Be Part Of Your Revolution and within the educational agenda of the two year M.A. programme. Part of the project was a one-week excursion to Bilbao where the group intensified their investigation into performance practice with guests and reading sessions. They worked, for example, on an excerpt of the play Crave by the British novelist Sarah Kane, which became an intimate public speech moment in the last part of the performance, next to snippets of texts by Eve Kosofsky Sedgwick, Adam Frank, L. Borges and William S. Burroughs.

Sound played a crucial role in the performance. The composer Nick Powell created a sonic space for Like Now using material from the album LP:2, by his band, Oskar. He also mixed in other music, improvised through playing live and sampling what students said into the microphone. 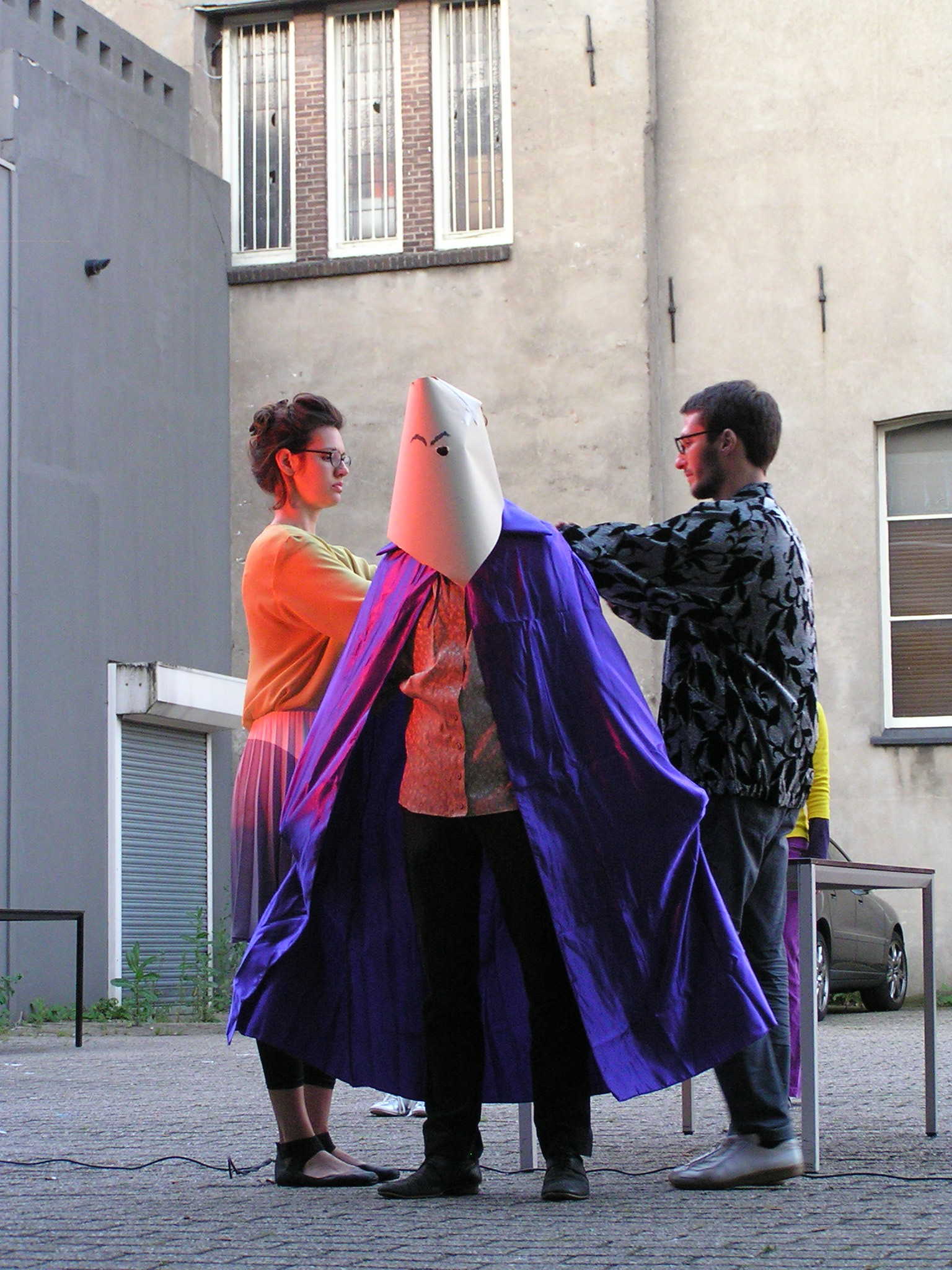 Remembering the performance Like Now (would be good) makes me think of a virus. To paraphrase William S. Burroughs, could seeing and hearing the performance's sounds and images, scrambled into small units, bring on an attack of flu, maybe even a pandemic? A virus from the performance lies silently waiting in us for the conditions to infect its environment. It might hide, take time and then break out at an unpredictable moment, while watching news coverage of the British riots in August 2011, for example. Watching this on a computer screen caused an affect, for me it was an inner necessity to articulate my anger at how these images were coded into weapons, into a declaration of war. Mainstream news channels published the images and codified the looting crowds of young people with moral judgments and class- and race-related categories, as if capitalism's logic would stop in front of the consequences of human desires. Through the interpretation and dissemination of determined meanings, these images function as instruments that conceal the violence of the system itself. Apparatuses of public exposure, via images and words, turn the looting crowds of young people into exhibits, as if they were objects of evidence in a court case. Such codification implies the division into either right or wrong. What we have seen on our computer screens, in the newspapers and on TV in August 2011, was the violence of the system acted out through its weakest participants on the streets. This is the moment now when the virus’ appetite grows.

A virus might help us to survive because it conveys the paradox of life and death: the host could eventually be killed by an overabundance of viral action. The host is the still image. Sometimes we become a still image ourselves without noticing. But what can we do with our still image? It would be good to undo its codification. Viral techniques can be the scrambling of images and sound (the famous Beatnik's Cut Up); an illiteracy towards the exposed, in defiance of a predetermined meaning; an acousmatic voice whose origin is lost; the exploitation of the image while protecting its poetics. These kinds of viral attacks emerge in Like Now (would be good), enacted in a number of scenes or 'accidents', as they are called. 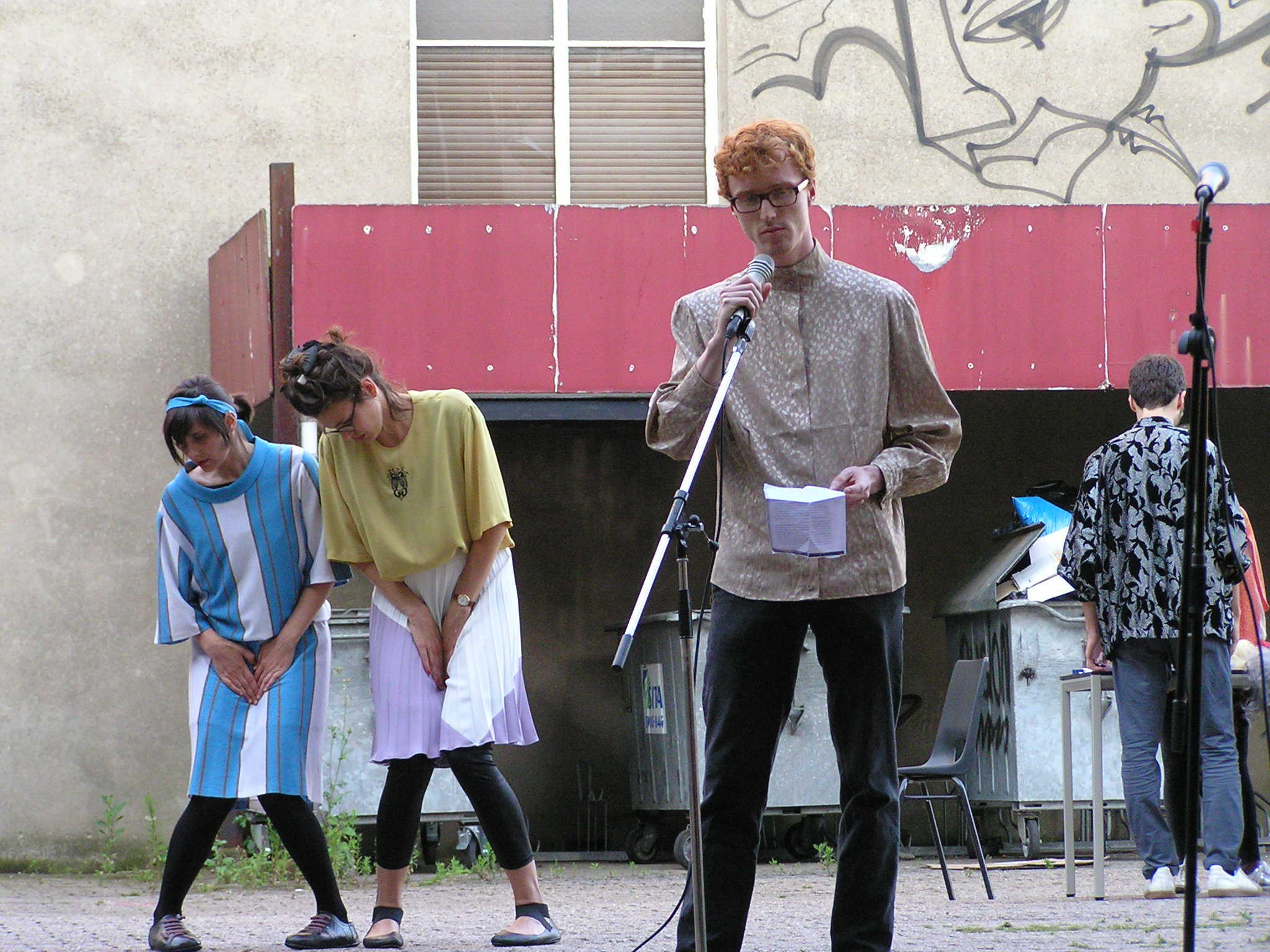 One ‘accident’: two performers walk from a group and place themselves in front of the audience. One of them directs the other to stage the ‘accident’ Exploded on Bomb. She is guided to stand on her toes, to buckle her back slightly forwards, to raise her arms almost parallel to her head and to curve her fingers into a claw-like gesture; finally to turn her face into a grimace. She holds this posture and becomes a still image. The 'director' of this posture then copies it with his own body. This mode of image production / reflection walks through all of the 'accidents' in Like Now and enables the performers to enact the image as a closed circuit without origin. Scrambling techniques then open up the circuit, producing endless symptoms and evacuating the concept of only one meaning. The virus is infesting. 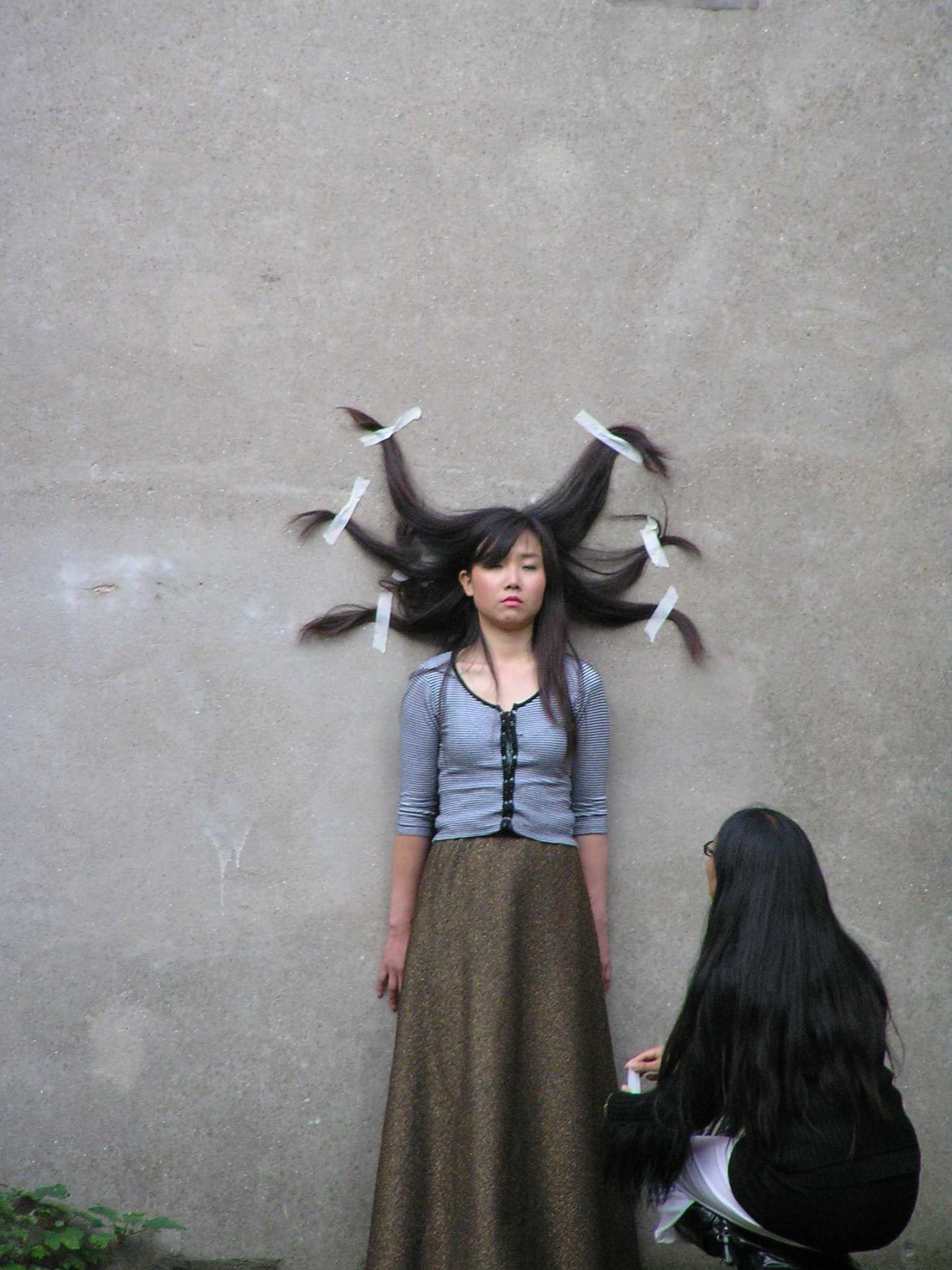 The Arnhem performance took place in a backyard parking lot opposite the Dutch Art Institute (DAI). This unique spatial setting allowed a staging similar to the frame of a movie camera. The films of Derek Jarman came to mind (thanks to my DAI-colleague Alena Alexandrova); the sound track resonated with the sonic legacy of Factory Records from Manchester in the early Eighties. 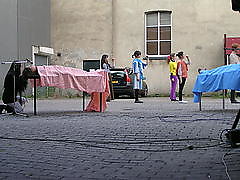 Nothing less than the exposed is at stake here – not its meaning, not its story or back story, not its function, but simply the image, confronted on stage with further non-functioning audio and visual juxtapositions. While both performers stand there, several other 'accidents' take place next to them, like little explosions without a definite result. This live-montage on stage, both in terms of image and sound, enable a non-linear story and a de-coding (as far as this is possible) of the act of exposure. 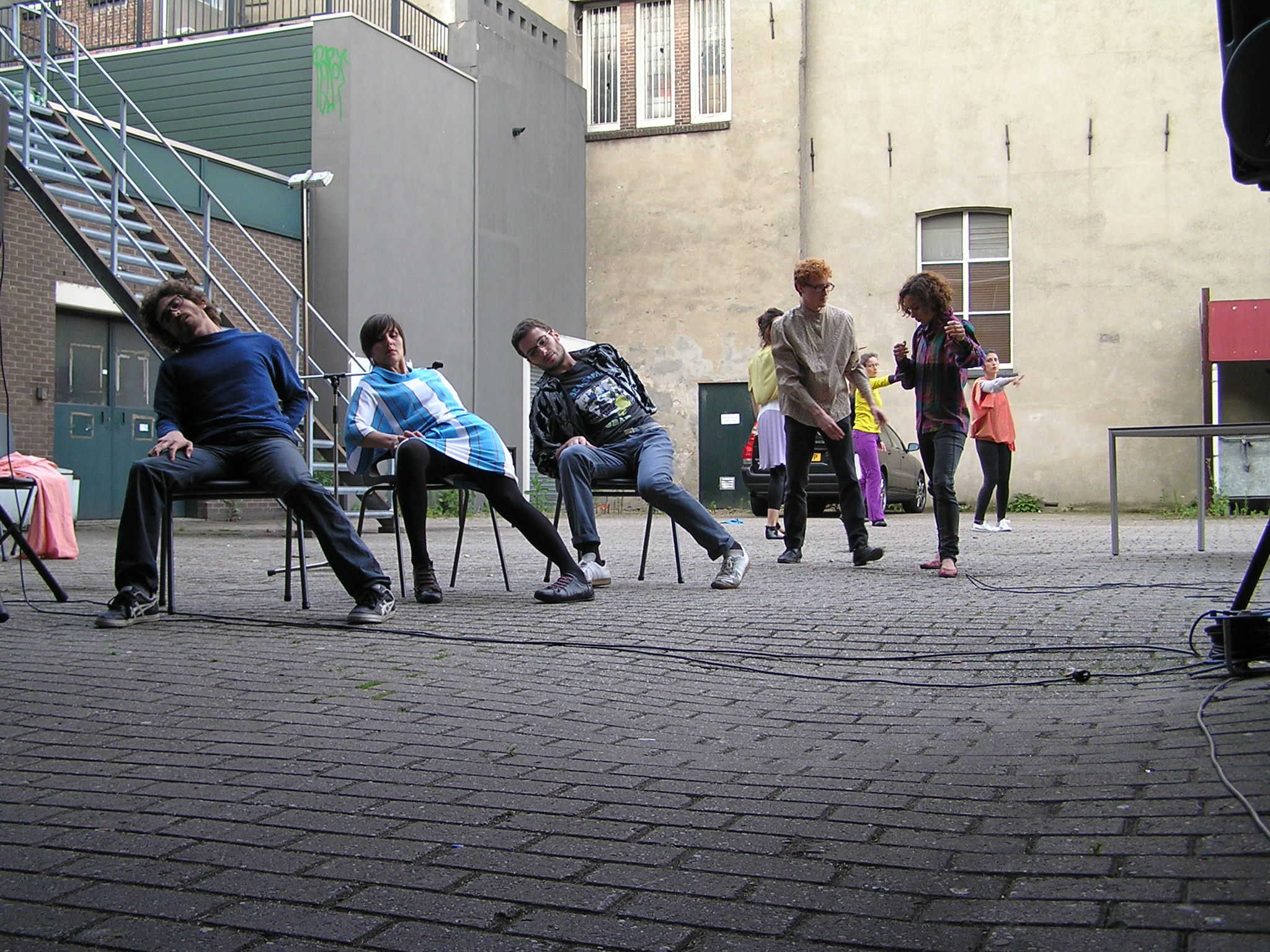 The codification of that which is exposed by public display (images, words, sounds) also operates through the gesture of a pointing finger. It is a gesture of showing, of making public, of marking the place where something is ‘held out’ to be seen and heard. Pointing towards the looting crowd separates between 'them' and 'us’. An apparatus declaring that you, she, he, they, are over there. It is at that point, on the boundary between ‘them’ AND ‘us’, that I would like to activate another remembrance, which could be taken as an indexical figure: the pointing finger itself appears all over Like Now. We see a group of performers pointing to the sky, to the other performers, to the audience and outside of the frame. A synchronized action, performed once by a group of three, then by four, turns the pointing finger into a dance movement. It comes into play in various scenes and contexts until it appears as an ornament, a choreographic element for ‘the pointy dance’, as it was described to me. The diverse enactments of pointing dilute its regime of control and judgment and address the pointer him/herself, the I. The exploiter and exploited are closer than we might have previously thought. Two and then three performers sit and point into their mouths. This might be Suicidal Finger from the list of ‘accidents’. The virus is infecting its host. The virus involves an un-controllable risk of implicating ourselves. It seems to me that there is no other way right now, in a time of insurrections, though it might become dangerous. Love is dangerous too. This would be good. 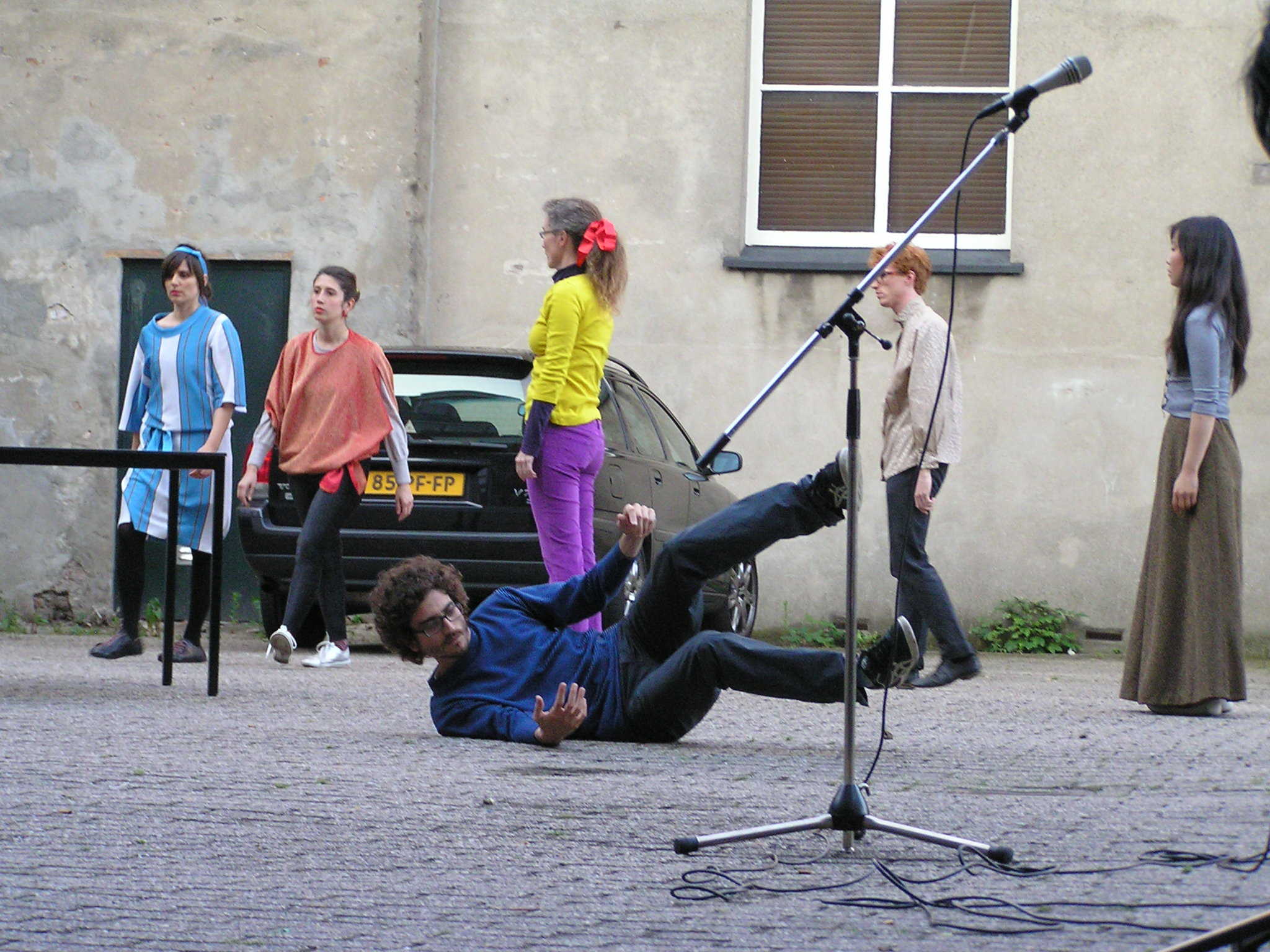 The ‘pointy dance’ unfolds a texture of relations and problematizes the act of exposure as a social issue. In one of the final scenes, a performer reads a monologue; it is a seemingly endless love poem with explosions of longing, all separated by an AND. No full stops, no commas. The virus infects a dualistic structure like in ‘them/us,’ ‘either/or’ and ‘good/bad.’ The AND does not function as a tool to add one description after the next one. It does not administer thinking. No, it opens up a condition for the inhabitation of a relation between you AND me. It is the moment where community could come into being. This is what I host as an infected memory from a moment of exposure, Like Now, performed in Arnhem on July 6, 2011.