IN BETWEEN A CUTE RIPPLE OF DESIRE ~ Nieuwe Vide presents the second part of the trilogy ‘All that you touch, you change’ with the solo-exhibition of the one and only Azul De Monte (DAI, 2021). We are so pleased that this announcement was warmly recommended to us by Nieuwe Vide's Saskia Burggraaf (DAI, 2020). 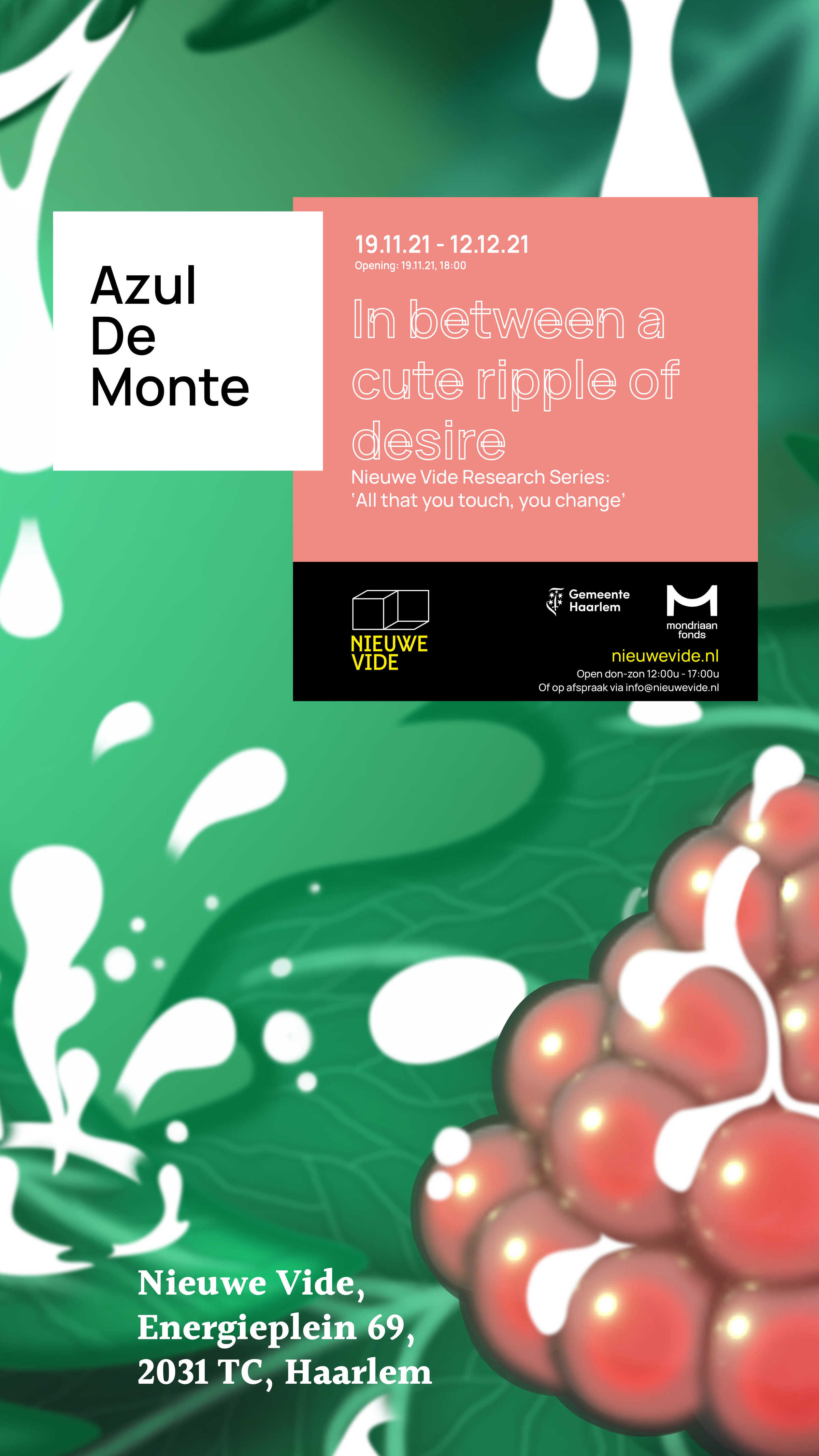 “Oh, that’s cute!” we exclaim with high-pitch voices at the encounter of someone or something that produces in us an extreme feeling of empathy and tenderness. This specific kind of empathy that can be related to the Spanish phrase “me lo como a besos”, meaning I will eat you up with kisses. Cuteness has the power to instantly disarm us as there is no doubt in our mind about what  is cute and what isn’t.

In the exhibition In between a cute ripple of desire artist-in-residence Azul De Monte questions the concept of cuteness. Who and what do we define as cute? What power dynamics are enforced within our society when we find someone or something cute? And how does this process of cutiefication play into our capitalist consumption culture? So immerse yourself in a De Monte’s art in which you’ll meet a toy-worm, be greeted by jingles and pop-beats, and see some hentai-based animation.

Azul De Monte is visual and performing artist from Argentina based in Amsterdam, Netherlands. Her art practice is currently focused on researching cuteness and the reductions and potentialities around the representation of human and non-human bodies under a capitalist time-structure of linearity. She uses different media such as video-animation, performance and alternative comic book publications. She has been developing her work in Argentina where she participated in several exhibitions. She studied Image and Sound Design at Universidad of Buenos Aires (2015) and participated in the Artists Program at Universidad Torcuato Di Tella (2017). She has recently finished her master studies at the Dutch Art Institute (2019-2021).

In between a cute ripple of desire is the second part of Nieuwe Vide’s research project All that you touch, you change.

‘All that you touch, you change’ is an artistic research project by the Nieuwe Vide in which they investigate the power of imagination and theorise about  (anti)capitalism.

The quote ‘all that you touch, you change’ is taken from Octavia Butler’s 1993 book Parable of the Sower, an apocalyptic science fiction story about the disastrous consequences of climate change and social inequality in the near future. It does offer some hope: we follow protagonist Lauren Olamina in her quest to establish her own belief called Earthseed. During uncertain times she manages to mobilise a group of people to set up a new ideological community, based on the Earthseed philosophy she has drawn up.

In this changing and confusing era we need this kind of imagination more than ever before. Warning signals from all sides declare the world is in crisis but nobody knows exactly what to do. Money and power habitually dominate discussions and eclipse the question of humanity. Can we actually imagine a world where money isn’t all-important?

‘All that you touch, you change’ is an artistic research project by the Nieuwe Vide in which they investigate the power of imagination and theorise about  (anti)capitalism. In collaboration with different artists, Nieuwe Vide reflects on how exactly capitalism works and how to comprehend it. They also consider alternative ways of living; to what extent is it possible to abandon the capitalist lifestyle/thinking and start afresh?

During the coming months they will work with three artists, who each in their own way reflect on these questions. The results of this research will be presented during three exhibitions at the Nieuwe Vide.