The superheroines 3 Boobs Girl and Tarantula Girl get a call that something is seriously wrong on Planet Earth. A mysterious slime is spreading in Amsterdam city, killing people by sexing them to death! Together they set off on a mission to save the earthlings. With the premiere of “Slimapocalypse” Hanna Monola and Nadja Henss (DAI, 2022) are very excited to announce the starting point of their artistic duo Skunk Kinder. Amsterdam Fringe Festival 9, 10, 11 and 12 September, 2021. 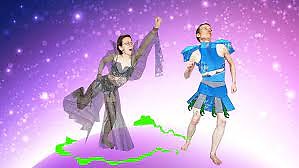 During the journey they discover more about their true selves, but also about the necessity of touch and intimacy. Slimapocalypse is a feminist twist on the classical superhero story, turning into a musical tinted with erotica. An inspiring and powerful story about love, friendship, lust and slime; a story in which even the villain reveals tears and anxieties. 15+ age recommendation.

Hanna and Nadja met while studying at the Gerrit Rietveld Academie in 2016. Since then an exchange and collaboration started.

Hanna is a performer and writer dealing with topics such as gender, sexuality and the body. Her performances, which are scripted and staged, often revolve around old clichés and stereotypes. An interest in fairytales and symbolism also frequently recurs in her pieces. She has been performing and exhibiting in various venues such as Theater Bellevue, C&H Gallery and De Appel in Amsterdam, Gallery Detroit in Stockholm and Sanomatalo in Helsinki.

Nadja is a video and sound artist, with a great interest in curating and working collectively. In her videos, images and sound installations she twists normative narratives to question the constructed perceptions by society. Her works are often text based and aim to create universes in which the human’s superiority is questioned.
She has shown her works at Stadsschouwburg and De Brakke Grond in Amsterdam, NieuweVide in Haarlem, Frappant Gallery in Hamburg amongst others. She also works as an organiser, curator and teacher for the yearly Nomad Camp in Khanty-Mansiysk, Siberia.

With the premiere of “Slimapocalypse” Hanna and Nadja are very excited to announce the starting point of their artistic duo Skunk Kinder.

For 11 days the Amsterdam Fringe Festival will be presenting theatre and dance by talented new, undiscovered and untamed makers at more than 30 venues across Amsterdam. Fringe is open and uncurated. We present a varied program featuring artists from a wide range of backgrounds, origins and futures. The festival is an ode to independence of spirit and it is a plea for artistic freedom. A big, fat, heartfelt embrace of experimentation in the true sense of the word: one whose outcome is able to effect a real surprise.