Upon invitation of de Appel, Martha Jager (DAI, 2016) has been looking through and reading hundreds of artist letters and postcards that form the correspondence collection of de archive of de Appel. Her research will be presented in two issues of 'The Remote Archivist'. 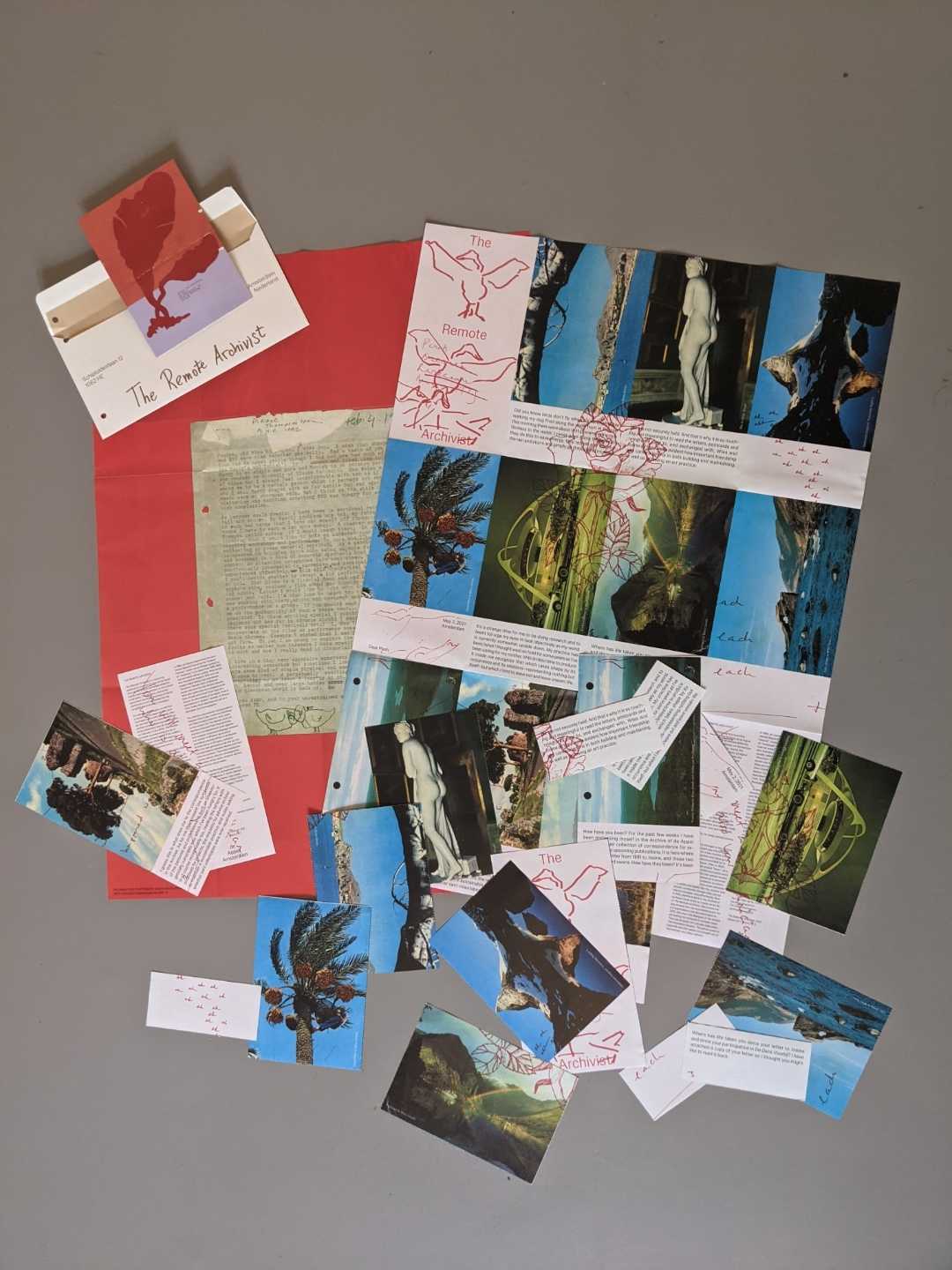 | tag: Amsterdam
“You will meet a driver who is also your technician.”

Martha Jager is no stranger to the Archive of de Appel, two years ago she joined as a guest archivist for a few months. During her undaunted searches she came across special correspondence and Mail art in the Archive of de Appel. Then, in 2020, she started the letter project “Dear,”. As the curator of “Dear,”, she invites artists and poets every month to write a letter that people receive at home. Martha is interested in personal histories and correspondence as a form to establish contact and create networks. The writer and reader, like the receiver and sender, constantly change roles, just as Martha changes roles effortlessly. Now in 2021, Martha is back in the Archive of de Appel as an artist to create series 02 of The Remote Archivist. She knows her way around and can accurately locate the correspondence she stumbled upon in 2019. She says: the dialogues in the archive are waiting for someone to activate them. That can be quick, but it can also take years. The resonance remains. The pieces come to (new) life and the makers are brought out of (sometimes very deep) oblivion.

More about Series 02 of The Remote Archivist
In 1980, de Appel programmed De Dans Voorbij(Beyond Dance) at the Holland Festival. Josine van Droffelaar worked as an “employee” in de Appel from 1978–1983, now we would call her a curator. Wies Smals, who founded de Appel in 1974-1975 and was usually called director but sometimes “directrice” (female form of director), would now have the title Artistic Director. Wies and Josine were the “compilers” of De Dans Voorbij and invited Pooh Kaye as a dancer. On the website of de Appel, Pooh is described as a “perfect” student of Simone Forti. Today, Pooh describes herself as a filmmaker and choreographer.

The intimate and personal correspondence between Pooh Kaye, Josine van Droffelaar and Wies Smals was Martha’s entry point for her series (02) of The Remote Archivist. In preparation, Martha contacted Pooh Kaye and they started a correspondence, both digitally and on paper. A personal language between two women of different generations describing everyday affairs in all degrees of importance. In 20 years, someone from the next generations will fish out the correspondence between Martha and Pooh from de Appel's archives! That someone whether an artist, researcher, curator, dancer, director, choreographer, filmmaker, writer and/or archivist will first assume the role of reader.

The second issue of this series: In response to your letter let us start by saying we do not feel addressed by ‘Dear Sirs’, will be sent to subscribers in autumn.

The Remote* Archivist is a recurring publication from the Archive of de Appel that can be directly accessed while the reader is physically distant, or the archive is far away. The distance, and at the same time the fickle proximity of digital platforms is now translated into the tangibility of archival messages.

On one side of the paper, you will find a record from de Appel Archive; be it from years ago or just yesterday; after all, how fast does an event turn into an archival record? Referring to the leaflets of documentation that de Appel sent to its ‘followers’ in the 1970s, The Remote Archivist commemorates the joy of receiving printed matter in the mailbox. The Remote Archivist will keep you informed about what has taken place and what is yet to become history.

On the opposite side of the paper, guest contributors are given space to cherish, celebrate and publish their findings. De Appel Archive is kept alive with a gentle touch, ample attention, and remains ready to be rediscovered, time and time again.