𝘓𝘐𝘔𝘐𝘕𝘈𝘓, a video work by Maya Watanabe (DAI, 2018) after a long delay caused by the pandemic, is finally on view at De Pont. Watanabe’s video has its roots in the historical and political reality of Peru, as it literally zooms in on a national trauma: the Peruvian civil war (1980-2000). Maya hopes 𝘓𝘐𝘔𝘐𝘕𝘈𝘓 will help to introduce the Peruvian reality to The Netherlands. Opening in Tilburg on the 5th of June, 2021. 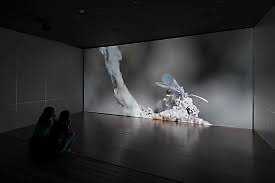 In the 2019 video work Liminal, by the Peruvian artist Maya Watanabe (Lima, 1983), the camera slowly feels its way across a piece of land: loose soil, rocks, roots – alternately in and out of focus . These abstract-looking close-ups sometimes bring to mind minerals glistening in the sunlight. That image flips, however, when a measuring stick suddenly comes into view and the camera stops at fragments of bone, teeth and clothing... From that point on the out-of-focus images are much-needed breathing intervals that offer time for us to contemplate the painful truth.

Watanabe’s video has its roots in the historical and political reality of Peru, as it literally zooms in on a national trauma: the Peruvian civil war (1980-2000), in which the armed Maoist group Sendero Luminoso(Shining Path) was responsible for the most abhorrent violations of human rights. Both in the country's highlands and its major cities, they used terror in an attempt to overthrow the corrupt military regime. The government, in turn, had no reservations about directing violence at its own people. A total of 20,000 people disappeared.

Watanabe followed the investigation of two mass graves from 1984, in Ayacucho and Huánuco. Lying in one are victims of Shining Path, and in the other are people killed by the military. Liminal is a brave balancing act that relates to an issue which continues to afflict Peruvians to this day. There are still hundreds of mass graves that have yet to be dealt with; only now are these being investigated by the government. The title Liminal refers to the interim stage, of grief and uncertainty, in which families of missing people find themselves. That situation also applies to the ambiguous state of those who are between ‘being missing’ and being identified as victims.

Liminal was produced by the Han Nefkens Foundation with support from the Mondriaan Fund and can be seen in the WOOL project space at De Pont, in an installation specially designed by the artist. Liminal has previously been shown at MALI, Lima, at Casa Encendida, Madrid, and at the Rose Art Museum, Waltham (Mass.).