Nothing Can Be Changed Until It Is Faced ~ No state should be exempt from criticism. Regardless of whether we support BDS (the Palestinian-led solidarity movement, ‘Boycott, Divestment, Sanctions’) or not, as signatories of this letter we share an insistent belief in the right to exercise non-violent pressure on governments that violate human rights. Read more and join the signatories if you wish. 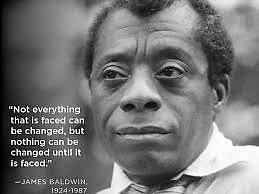 Nothing Can Be Changed Until It Is Faced

The aforementioned initiative is a belated response to the contentious resolution adopted by German parliament in May 2019, via which the aims and methods of the Palestinian-led solidarity movement, ‘Boycott, Divestment, Sanctions’ (BDS), were formally condemned as antisemitic, leading to a cross-party decision to cut off public funding for projects that “actively support” the BDS movement. The statement criticises this parliamentary resolution, describing it as “dangerous.” We share this concern and view the resolution’s curtailment of the right to boycott as a violation of democratic principles. Since being passed, the resolution has been instrumentalized to distort, malign and silence marginalized positions, in particular those which defend Palestinian rights or are critical of the Israeli occupation.

We urge the German parliament to heed the findings of the European Court of Human Rights, which recently rejected the criminalization of boycotts directed against Israel, ruling clearly against the prosecution of non-violent activists and affirming boycott as a legitimate exercise of freedom of expression (June 2020). No state should be exempt from criticism. Regardless of whether we support BDS or not, as signatories of this letter we share an insistent belief in the right to exercise non-violent pressure on governments that violate human rights.

We reject the German parliamentary resolution because it is this very right which it denies. We reject it because it has exacerbated polarization within the cultural community at a time when the rise of right-wing nationalism calls for us to join in solidarity to combat the surge of hatred that is increasingly prevalent both within Germany’s borders and beyond. We reject it because it has effectively thrown a blanket of censorship over public institutions at precisely the moment when the richly diverse community that is active in Germany, has a valuable role to play in forging a critical and inclusive culture, as an alternative to the authoritarianism, racism and xenophobia that the far right is intent on entrenching.

The resolution has created a repressive climate in which cultural workers are routinely asked to formally renounce BDS, as a prerequisite for working in Germany. Meanwhile, cultural institutions are increasingly driven by fear and paranoia, prone to acts of self-censorship and to pre-emptively de-platforming and excluding critical positions. Open debate around Germany’s past and present responsibilities in relation to Israel/Palestine has been all but suffocated. Forums of cultural exchange in which we previously came together to reflect upon and debate the entangled histories that we emerge from and exist within, are routinely denied, as institutions anxiously seek to avoid political censure and the loss of public funding. In this climate, a number of valuable voices—such as those of Achille Mbembe, Kamila Shamsie, Peter Schäfer, Nirit Sommerfeld and Walid Raad—have already been demonised, obstructing a necessary collective reckoning with the intersecting forces of violence that continue to shape our present.

The resolution is indifferent to the diversity of Jewish opinions both within and beyond Germany; in particular, to the many leftist Jewish and Israeli voices that are vehemently critical of Israel’s well-documented violations of international law. Such voices are, astonishingly—and with increasing frequency—invalidated as ‘antisemitic.’ The resolution additionally disregards warnings issued by foreign policy experts, human rights organisations and German foundations that are directly engaged in the Middle East, many of whom have firmly opposed the problematic manner in which the resolution conflates criticism of Israel with anti-Jewish racism. This conflation shields Israel from being held accountable to standards of international law, and obscures the historical and political circumstances that gave rise to the Palestinian struggle for freedom, justice and equality. It also distracts detrimentally from the ongoing fight against the virulent growth of antisemitism across the globe, including within Germany’s parliament, police force, army and intelligence services.

We acknowledge and deeply value Germany’s ongoing commitment to atoning for the Holocaust. At the same time, we condemn the negligence of the German state when it comes to recognizing and atoning for Germany’s past as a perpetrator of colonial violence. The fight against antisemitism cannot be conveniently decoupled from parallel struggles against Islamophobia, racism and fascism. We emphatically reject the monopolization of narratives of oppression by states such as Germany, which have historically been perpetrators of oppression. We reject the notion that the suffering and trauma of victims of political and historical violence can be measured and ranked.

In solidarity with the cultural institutions that have spoken out before us, we call on German parliament to withdraw the controversial resolution. We call on these institutions to follow their statement with meaningful action. We ask them to lead the way in restoring conditions under which the productive exchange of divergent opinions can occur. Over-zealous monitoring of the political views of cultural workers from the Middle East and Global South, must be seen for what it is—back-door racial profiling—and immediately discontinued. The maligning of individuals by means of baseless charges of antisemitism must stop.

We close with the words of James Baldwin, an astute critic of the evils of the Holocaust, as well as of the horrors of slavery, colonialism and racism: