APOCALYPTIC FEMINISMS ~ Round Table Discussion convened by the amazing Hypatia Vourloumis (DAI faculty) ~ With: Eirini Avramopoulou, Aspa Chalkidou, Laura Harris ( whom DAI had the great pleasure of hosting as guest respondent to our AEROPONIC ACTS in 2019) and Sandra Ruiz. State of Concept ( COOP partner at DAI) organises this as part of the GOSSIP SERIES curated by iLiana Fokianaki. WATCH THE EVENT ONLINE ! 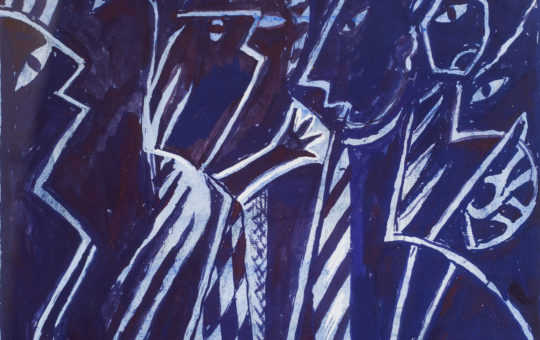 In this gathering we will think through the ways in which gossip is an apocalyptic feminist and queer practice. The term “apocalyptic” here seeks to mark and do several things at once. It refers to the revelatory forces of detailed feminist knowledge practices, and to how such anti – “grand narrative” practices of revelation are necessary for ending the heteropatriarchal racist world as we know it. It also keeps our focus on what still needs to end, including any essentialized or simplistic category of “woman,” (or “man” and “human”), and how queer feminist knowledges and practices are crucial for the formation of different pathways for planetary social organizing and solidarities. Thus, in the spirit of the Gossips Series, in this iteration the gathering of “apocalyptic feminisms” will trouble the demonization of gossip as petty feminized activity and attend to gossip as the active making of worlds (José Muñoz); how its practicing unearths, protects and retains wisdoms, memories, cohesions, and knowledges (Silvia Federici); and how gossip often becomes a “necessary archive,” in Sandra Ruiz’s words.

Apocalyptic gossips are always about queer reading and writing practices that critically reveal, and the uncovering and inventing of modes of reproduction through the performing of, and immersion in, emergent and deviating knowledges. Importantly, apocalyptic gossips celebrate the collective pleasures and humorous insights shared in and across acts of throwing critical light and shade.

In light of the above, each presentation, and the following discussion among the speakers and audience members, will share knowledges and seek to collectivize across differing yet resonating historical, geopolitical, regional contexts and practices. Readings, presentations, and conversations will move across different sites of resistance: from the militancy of Puerto Rican feminist anticolonial revolutionary Dolores “Lolita” Lebrón Sotomayor; to marginalia as informal writing practice and the reproduction of radical social formations in the Americas; to the insistence of fugitive feminist writings and activisms in Greece and Turkey, and the how of their doing; to questions of sexuality, survival, and how institutions and the state function by way of covert rumor. In thinking and discussing together we will engage with collective gossips as countering strategies.

Why should one insist on writing about feminisms today after bearing witness to the repetitive epistemic violence done in the name of ‘woman’, and/or to the spectral effects of everyday processes that sustain, displace and re-enact normative, heterosexual, neoliberal, racist and sexist representations and identities, both locally and worldwide? Or rather how? In other words, what is at stake in holding on to feminist writings; to writing about feminisms? What is it that escapes this notion and yet returns to re-write it in urgency? By focusing on the recent on-line journal Feministiqά and drawing insights from research in Greece and Turkey, this talk will address the aforementioned questions that become even more troubling nowadays vis-a-vis the re-emergence of authoritarian regimes, sexual harassment, gender violence, homo/trans phobia, racism and crisis led precarity.

Eirini Avramopoulou is an assistant professor of Social Anthropology at Panteion University of Social and Political Sciences, Athens, Greece. She received a PhD in Social Anthropology from the University of Cambridge (2012). Her research interests include anthropology of human rights, social movements and activism; feminist and psychoanalytic approaches to subjectivity, biopolitics and affect; and more recently she focuses on displacement, memory and trauma in the island of Leros, Greece. She is the author of Porno-graphics and Porno-tactics: Desire, Affect and Representation in Pornography, (co-edited with Irene Peano, 2016, Punctum Books), and Το Συν-αίσθημα στο Πολιτικό: Υποκειμενικότητες, Εξουσίες και Ανισότητες στο Σύγχρονο Κόσμο (Affect in the Political: Subjectivities, Power and Inequalities in the Modern World,), 2018, Nisos: Athens.

Either as an ephemeral affective gesture generating knowledges and ways of knowing that have been viewed as feminized and consequently devalued, or a practice that makes available and transmits invaluable and hard to find information through intimate networks of surviving, and also as a discourse connected to the spreading of rumors, sexual slander, and the persecution of deviant life, gossips and gossiping have historically been connected to the sexual and its un-official archives of knowledge.

Aspa Chalkidou is a social anthropologist currently completing postdoctoral research on the concept of asylum as a contradictory symbol of inclusion within the nation and Europe, under a Marie Skłodowska-Curie fellowship (University of Warwick). In 2015. Chalkidou received a Ph.D. in the Department of Social Anthropology and History, University of Aegean, Greece. Their thesis consisted of a long-term ethnographic study of BDSM social and sexual networks in contemporary Greece. Over the last decade, Chalkidou has participated in several EU funded interdisciplinary projects as a postdoc and field researcher, undertaking research on sexual and gender politics, kinship, migration policies, along with issues of institutional injustice.

Reproduction at the Margins

Returning to the informal writing practices, such as marginalia, that have been important to the some of the radical social formations I have been studying in the Americas, I will argue for their significance as feminist practices. Focusing in particular on the writing done by members of the Johnson-Forest Tendency and the Correspondence group in the United States, I will show how such practices worked against the idea of the individuated author or leader (even as published versions of their writing often worked to recuperate it) and how these practices figured centrally in the reproduction of these radical social formations.

Laura Harris is Assistant Professor of Cinema Studies and Art & Public Policy at New York University. She is the author of Experiments in Exile: C. L. R. James, Hélio Oiticica and the Aesthetic Sociality of Blackness (Fordham University Press, 2019). She has also published in Social Text, Women & Performance, Criticism and other journals.

Sandra Ruiz is an associate professor of Latina/Latino Studies & English at the University of Illinois at Urbana-Champaign and a 2020-2021 Helen Corely Petit Scholar. Ruiz is the author of Ricanness: Enduring Time in Anticolonial Performance (NYU Press, 2019) and a co-series editor of Minoritarian Aesthetics (NYU Press). She is the co-founder of the Brown Theatre Collective and the founder of La Estación Gallery where she directs, curates, and produces for both. Her work has been funded by the Humanities Research Institute at Illinois, the Unit for Criticism & Interpretive Theory, and the Sue Divan Producer’s Fund. She is working on two solo book projects: Perilous Pedagogy: Psychoanalytic Affections Within the Live Aesthetic, and a book of poetry entitled The Edge of Depth. Ruiz is currently co-writing a book with Hypatia Vourloumis entitled Formless Formation: Vignettes for the End of this World to be published in 2020 (Minor Compositions).

Hypatia Vourloumis is a performance theorist and holds a Ph. D in Performance Studies from NYU. She teaches at the Dutch Art Institute. She is co-editor of the issue “On Institutions” for Performance Research Journal, and has published in academic journals such as Ephemera, Women and Performance and Theatre Journal, edited volumes and art catalogues. She is the co-author with Sandra Ruiz of the forthcoming book Formless Formation (Autonomedia/Minor Compositions) and completing a monograph on the politics and performance of Indonesian paralanguage.