January Chronicle by the Shine.

The phones in the room are going crazy. It has basically become a flip phone orchestra. A sudden shuffling sound takes over as everyone looks for their phones.

A communal “scream” composed of a polyphony of tavic sounds echoes through the building’s structure, down to its foundations. It is the furore of true love, felt is a solid shake of collective hysterical excitement. As everyone starts whipping out their over-tasseled phones, a gasp so big is taken in by the entire group that the oxygen in the room is vacuumed out for a few seconds.

As they all open their freshly received party invite from

some phones drop on the  floor, screens cracking.

The invite contains so many glittery gifs that M. falls to the floor, victims of a dramatic epileptic attack. The others, too excited to actually pay attention to his shaky undertaking, can’t take their eyes off the remaining screens in the room. Except Care(n)tin, of course, who whips out her emergency excitement epilepsy spoon to push it down his throats.

The glossary, sitting on their favourite spot - the shelf - starts to read with a charming soft lisp:

Glownorrhea, who can never get it together in these situations, starts to melt into the floor out of sheer excitement, slowly seeping into the cracks between its wooden planks. 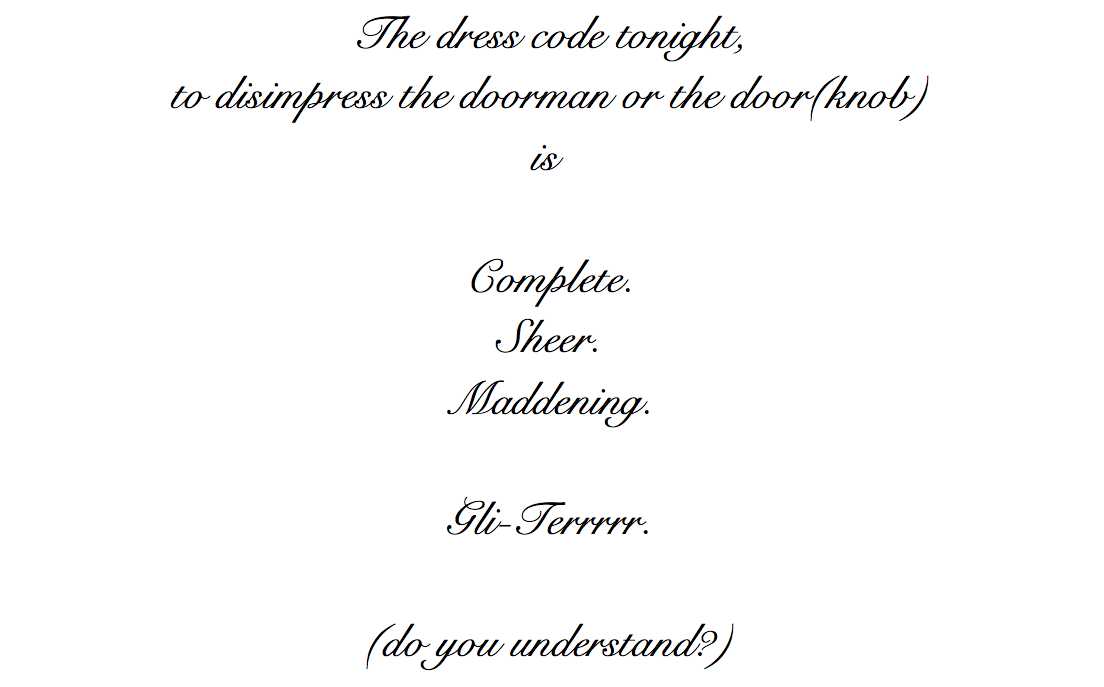 The whole  room nods at once, excited. The communal hyperventilation is REAL.

M. starts shaking again, Care(n)tin is not bothered this time.

We need to GET READY

[ Two mornings later, as they all congregate again, in the shambles of a terrifying hangover]

The Shine, in their habitual narcissism that their Moon in Piscis is not really able to eclipse, has evaporated into the glimmering air, dramatically. As they narrate the events in a twisting glittery riddle, they contemplate the inception this whole never-ending party has become, an ethereal multiple deflection of a million glimpses of shiny dis-abstractons ("Girl, cut being so pretentious", interferes High-Drain-Ja), spreading around the room like confetti. They selfishly consider plagiarism of that that cannot be owned, as the entire gang gets slowly gobbled up by the late reminiscences of that midnight shimmer.