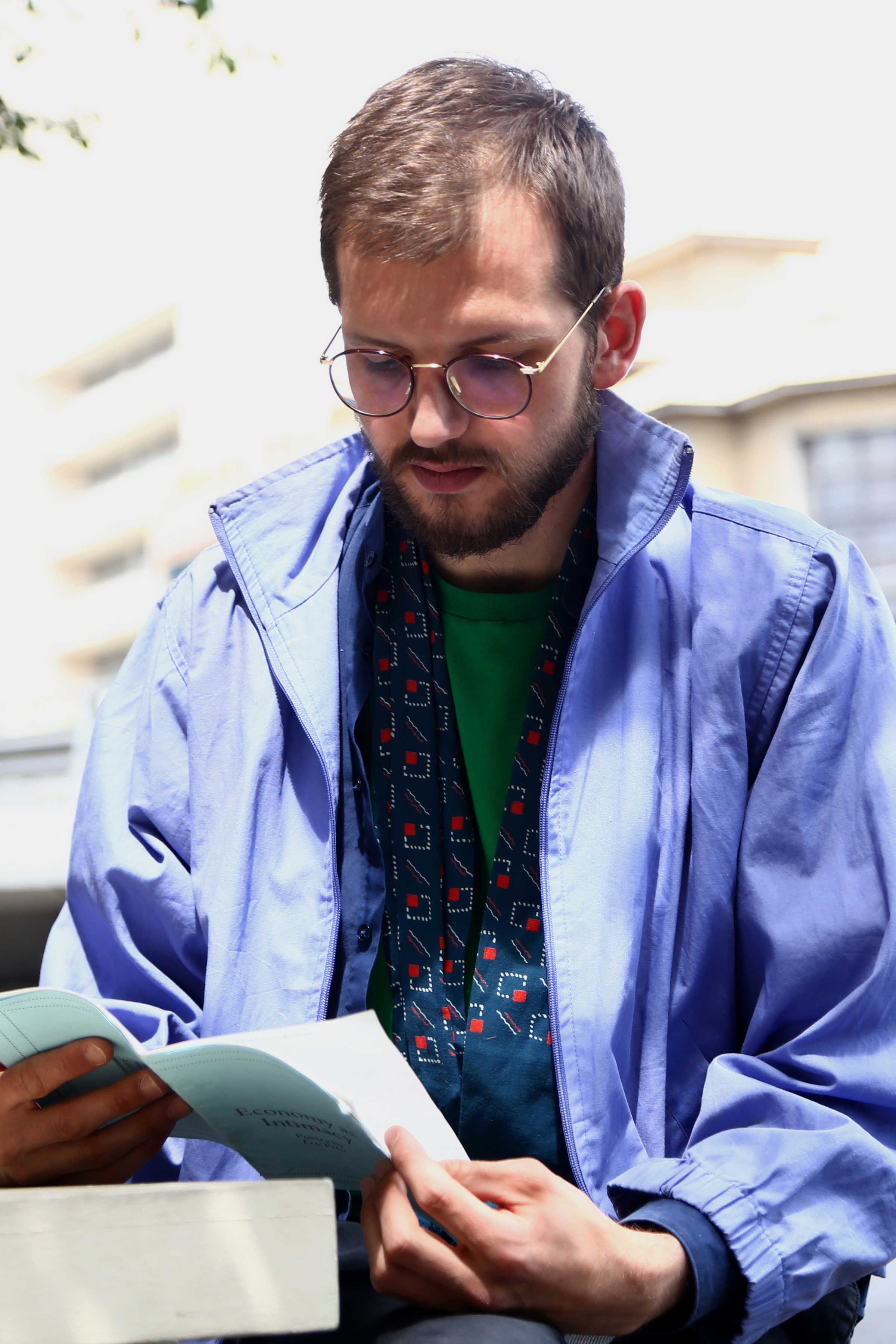 Eric Peter (b. 1989) is an artist and writer, born in Dordrecht, The Netherlands. His practice revolves around language, in a deconstruction
of the normative in history-making and social paradigms. Language here, is to be read in its broadest sense; from the speech apparatus and bodily language, to vocabularies, (mis)spellings and gobbledygook. Projects can entail installations, discussions, workshops, performances, and video or text works—with an emphasis on the exchanging, vocalising and mediating of different thoughts or opinions. Through the interweaving of collective and particular voices, with very personal experiences, Peter critically approaches his subjects and questions.
Currently, his main focus lies on ‘Economy as Intimacy’, a larger project in which Peter aims at reading late capitalism through intimacies, using poetry as a medium of speculation. The project has culminated in a multitude of publications, reading groups, lectures, performances, and, more recently, choreopoems. He holds a BFA in Fine Arts from the Royal Academy of Art in The Hague, and has concluded an MA in Art Praxis at the Dutch Art Institute (DAI) in 2019.

Peter has been awarded both the Baker Tilly Award and the KARA in 2018, and was shortlisted for the Sybren Hellinga Prize in 2016. He was a recipient of the Mondriaan Fund’s Stipendium for Emerging Artists in 2015 in support of his project ‘Familiar Strangers: Conversations on the Near Future’. Peter’s writing has appeared in the journal of Contemporary Art Stavanger (CAS), Nieuwe Vide, and Upgration among other publishing platforms. Recent solo and group presentations include ‘(A Currency Called Love) دل هــــــــــوایـــی’, Studio17, Stavanger, Norway (2019); ‘Delbaram’, a voice message project, Bern, Switzerland (2019); ‘Words Don’t Come Easy’, Kunst im Tunnel (KIT), Düsseldorf, Germany (2018); ‘Assemblages of Intimacy’, A Tale of a Tub, Rotterdam, The Netherlands (2018); ‘Almende’, Second Triennial of Beetsterzwaag, Kunsthuis SYB, Beetsterzwaag, The Netherlands (2018); ‘Witness’, First Karachi Biennale, Karachi, Pakistan (2017).

Follow Eric Peter's "life after DAI" by means of https://www.ericpeter.eu