Every year, 2.5 million tourists visit Amsterdam's Red Light District. What images and objects do they take with them from their visit, and how do these reflect the reality of life in that neighbourhood? The Amsterdam Museum and CBK Zuidoost jointly present NR. 1 TOURIST ATTRACTION, an exhibition by the artist Jimini Hignett (DAI, 2010). The exhibition tells the story of inequality, double standards and human trafficking. Until March 1, 2020

From November 1th, the Amsterdam Museum will be exhibiting the work of artist Jimini Hignett: Nr. 1 Tourist Attraction. For seven consecutive years now, the Amsterdam Museum and CBK Zuidoost in the Bijlmer have invited a contemporary Amsterdam artist to give his or her view of the city by means of an annual presentation. Artist Jimini Hignett made an art installation, consisting of videos, self-portraits, a life-size statue and many souvenirs, about the two sides of the Red Light District.

A Small Collection of Innocuous Objects
Souvenirs represent a distilled image of the place they portray. They depict icons of the ‘exotic’ location which is being visited by the tourist, and are bought as a nostalgic reminder or in order to share their experiences of that place with others. In Amsterdam, in the souvenir shops, holding a prominent place alongside the windmills, tulips, clogs, canals, cows and bicycles, is the Red Light District. Hignett collected these artefacts with the idea of investigating if souvenirs can reveal something of the way some narratives are repressed whilst others are promoted to represent a particular version of history. 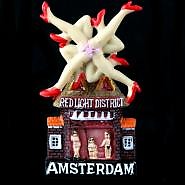 Belle Revisited
Hignett’s sculpture Belle Revisited is a life-sized wooden replica of ‘Belle’, a small bronze statue of a woman posing provocatively in a door frame, which stands at the centre of the Red Light District. Hignett has invited people to use a knife or chisel carve their initials or a heart into the body of her sculpture in an admission of complicity in turning away from the very real pain suffered by the women within the actual doorways of the world’s red light districts. The accumulation of carved initials from all over the world, signifies the extent of the trade in women’s bodies. 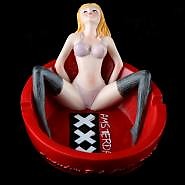 The Prostitution Monologues
The Prostitution Monologues This series of video’s details the stories of (predominantly) women’s journeys into prostitution. The testimonies, taken from interviews conducted by the artist, are told by actors who are often intentionally dissimilar to the protagonist whose story they are relating. This produces a disorienting effect, through which Hignett aims to disturb the viewers’ conceptions and to challenge an ‘out-of-sight-out-of-mind’ response whereby these things seem to be acceptable, or inevitable, when they happen to a semi-literate woman from Sierra-Leone, rather than a white, English-speaking man. The videos on the larger screens pertain to survivors of prostitution in the Netherlands. The smaller screens show testimonies from elsewhere in the world. 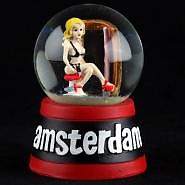 Reversing the Gaze
To accompany their testimonies, each of the survivors interviewed by Hignett painted a self-portrait. These are an expression of how they see themselves, whilst at the same time, as they are painted on brown paper bags, the resulting masks serve to retain their anonymity. In many cultures, a mask has magical powers and gives strength to its wearer, but the bags also refer to a kind of bag-over-head torture. From their vantage point high on the joists of the museum, they look down on us in a reversal of the standard gaze. 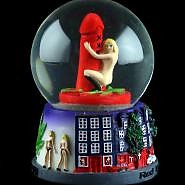 CBK Southeast
The installation Number 1. Tourist Attraction includes work produced following Jimini Hignett’s research period as artist-in-residence at CBK Southeast in the Bijlmer. Belle Revisited was carved with the assistance of Gabriel Piñero. The exhibition has been made possible with the support of CBK Southeast, The Mondriaan Fund, the Amsterdam Fund for the Arts, as well as many others too numerous to name individually.

The exhition is hosted by the Amsterdam Museum.