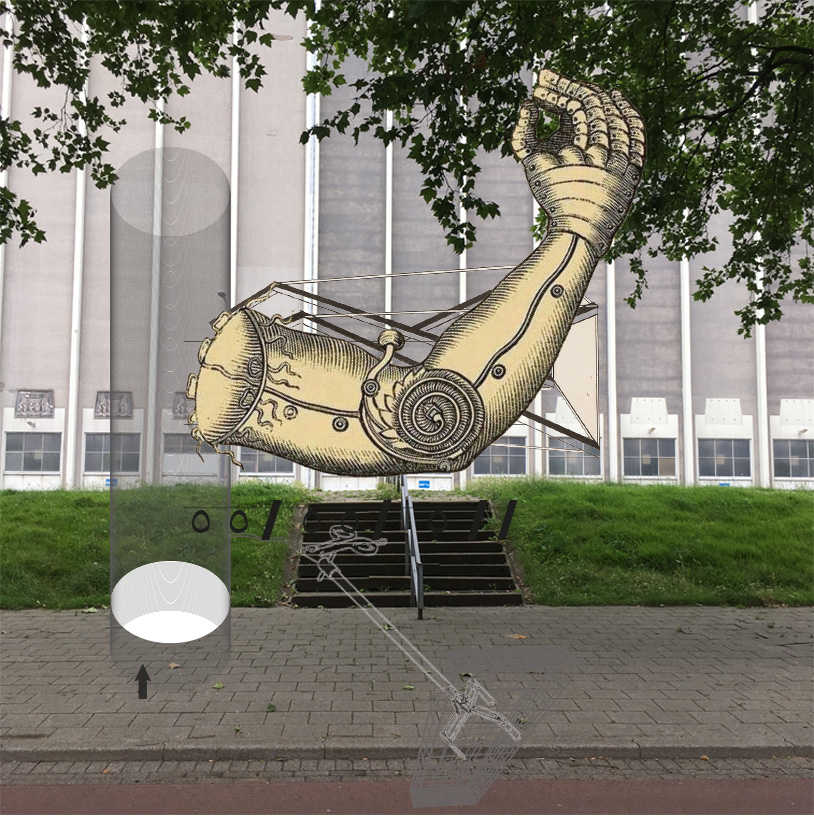 Please join us on Saturday, June 22, at 4pm, for an annotated walk with Rana Hamadeh. Starting from Rib and venturing out into the neighbourhood, we will walk a rope… in circles. Jog. Street-study. Read poems as we walk. Translate. Read difficult stuff. Translate. Read lips. Read palms. Translate…. For, lips and palms are difficult too.

The Liquid Reader Street Sessions involve an open-air study-trajectory and syllabus that Hamadeh will be designing and activating as part of Opaque Justice: A Dialectics of Rerouting – a ‘playground’ dedicated to the practice of ‘testimonial life’ in the place of legal subjecthood. The upcoming session will be the first of four walks organised in collaboration with Rib, Rotterdam. It will include an eclectic reading of works around desire, translation and errantry, alongside readings of shop windows, car numbers, pigeons and the weather.

Opaque Justice: A dialectics of Rerouting both evokes and diverges from Édouard Glissant’s phrasing in his book Poetics of Relation (1990) in order to think of an ‘ethics of justice’ that is neither inscribed in, nor predicated upon, structures of property and ownership. For Glissant, opacity is the foundation of a relation that recognises the irreducibility of singularity into a universal model. As he notes, to live in relation – a disindividuated relation – is to return to the opacities that ‘ . . . produce every exception, [are] propelled by every divergence, and live . . . with the reflected density of existences.’ Glissant’s use of the word ‘détournement’, translated into English by translator Betsy Wing as ‘rerouting’ (rather than ‘detour’), invokes incessant movement in search of relation, or, better say, a movement that is constantly manifesting itself of and in relation. The translated term, ‘rerouting’, according to Wing, implies an ‘active change of direction, but also a ‘turning away, or aside in a redirection of, or in refusal to direct attention’.

The first edition of the iterative project Opaque Justice: A Dialectics of Rerouting was launched in May 2019 at silent green Kulturquartier, Berlin as the 24th edition of Dutch Art Institute’s (DAI) Roaming Assembly – a recurring public symposium functioning as the ‘centerfold’ event at DAI’s Planetary Campus . It encompassed contributions by Ramon Amaro, Layal Ftouni, Ayesha Hameed, Sebastian de Line, Renée Ridgway, WALTER books and the participants of the Justice Economy: Dramaturgies of Debt and Indebtedness Factory workshop, led by Hamadeh, also in the context of the Planetary Campus. This ‘reader-on-the-move’, located in the residential south of Rotterdam, will scale down the level of public enquiry present in the first edition by putting into practice the incessant exchange of bodies and words, working with language and translation as an attempt to effect relations through movement.

The Liquid Reader Street-Sessions (1-4) are organized upon the invitation of De Fluyt en de Hoi, a program developed and guided by Paul Elliman, for which he has asked a group of artists to respond to his directive to explore the life of Rib’s building along with the Charlois neighborhood and the city surrounding it. Throughout the course of the year, the group will overlap and contribute collectively to the functioning of the building and its outer extensions as a developing social composition within and as part of its environment. Based around a specific street address and what happens within and nearby, De Fluyt en de Hoi attempts to extend a motivating interest that Elliman shares with the participating artists, “that art can appear in the functioning form of any of those parts of the world that it might claim to be reporting or establishing a connection with”.