"Life after DAI" for Alaa Abu Asad (DAI, 2018) begins in Vienna where he is selected to be the 2019 Artist in Residence at the KKA-Residency. From June onward Alaa continues his journey and will move onward to Maastricht for his residency at the Van Eyck. 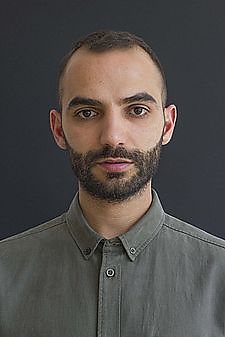 Alaa Abu Asad lives and works between the Netherlands and Palestine. He received a BFA from the photography department at Bezalel Academy in Jerusalem; and MA from the Dutch Art Institute (DAI) in Arnhem, the Netherlands. Alaa’s work is focused on the image and its various uses and readings, and it has featured in Alfilm - Arab Film Festival Berlin; 5th Cairo Video Festival, Medrar, Cairo; All the Other Lovers, 98 Weeks/Project Space, Beirut; and others. He has worked as an assistant curator for the UNRWA audiovisual archive exhibition The Long Journey in Jerusalem, and for Never Part Exhibition at the Palestinian Museum.

Upon achieving his bachelor’s degree in photography from Bezalel Academy in 2013, Alaa resolved not to become a photographer, but rather to dedicate his artistic practice and production to chasing the quintessence of the photograph, its various applications and integrants: time, place, event, photographer, photographed object/subject, and what emerges between them. Archival and historical documents thus, whether photographs, written works, or events, have intrigued Alaa. And he often utilises these media and techniques in his artwork which consists of photographs, texts, and videos by deeds of replication, deconstruction, and erasure. Via these acts, Alaa attempts to (re)create images and foster different ways of watching and reading them, the same way he did in his first solo exhibition Image : Imagination, Resurrection, which was conducted during an art residency in Switzerland in 2014. The experience of producing The Long Journey exhibition for UNRWA'S audiovisual archive in 2013-2014, allowed Alaa to get exposed to historical material and (digital) archiving methods, as well as to question the role of such archives (and institutes) in shaping a memory and (re)presenting an image of a certain place such as Palestine. This merit continued to challenge Alaa’s job at the Palestinian Museum where he worked as an assistant curator between 2015-2016. Alaa took advantage of his experience at the museum to compose his first photo essay, which later transformed to a video essay, Wild Flowers Plants of Palestine (2018). Yet the endeavours to introspect the image, its meaning, its ways of reading and conceiving, persisted to preoccupy Alaa’s master's study at the Dutch Art Institute (DAI) where he graduated in 2018. Alaa’s project The Untranslatable Words of Love was selected for the Young Artist of the Year Award (YAYA, 2018) in its 10th edition led by Emily Jacir