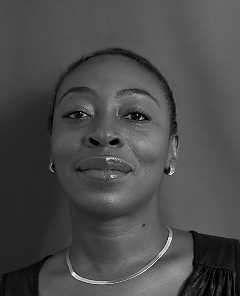 Otobong Nkanga, born in 1974 in Kano, Nigeria, lives and works in Antwerp, Belgium.

Otobong Nkanga's drawings, installations, photographs and sculptures variously examine ideas around land and the value connected to natural resources. In the work of Otobong Nkanga, activities and performance permeate all kinds of media and motivate photography, drawing, painting, sculpture, installation and video, though all the different works are thematically connected through architecture and landscape. As a human trace that testifies of ways of living and environmental issues, architecture and landscape act as a sounding board for narration and 'the performative'. According to the artist herself, she uses her body and voice in live performances or in videos to become the protagonist in her work. However, her presence serves mostly as a self-effacing catalyst, an invisible hand that sets the artistic process in motion. Nkanga negotiates the completion of the cycle of art between the aesthetic realm of display and a strategy of de-sublimation that repeatedly pushes the status of the artwork into contingency. In many of her works Nkanga reflects metonymically on the use and cultural value connected to natural resources, exploring how meaning and function are relative within cultures, and revealing different roles and histories for the same products, particularly within the context of the artist's autobiography and memories.

From 2013 -2014, Otobong Nkanga is a guest of the DAAD Berliner Künstlerprogramm – Artists-in-Berlin Program.