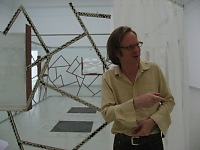 Mark Kremer is active in the art world since 1987, when he joined the Time Based Arts in Amsterdam as their youngest staff member, and worked there for a year. After graduating as an art historian and archeologist in 1988, he participated in 1990-91 in the curator course of école du Magasin, Centre d‘Art Contemporain at Grenoble. Back in Amsterdam he started to write extensively on contemporary art developments and artists. He curated a.o. ‘Joy & Pain...’ at ICA/Amsterdam, 1992; the arts section of Festival a/d Werf in Utrecht from 1994 to 1997. Since 2000 Mark Kremer is active as a curator, writer and guest teacher at art academies. Exhibitions include ‘Höhere Wesen befahlen: anders malen’, Smart Project Space, Amsterdam 2001-02; Mike Tyler and et al.: The Wanderer Project, Christchurch, New Zeeland 2002; Sculpture Quadriennale Riga 2004, curator Dutch participation by Hans van Houwelingen; The Projection Project, MuHKA, Museum of Contemporary Art Antwerp, 2006-07.

From 2008-2010 Mark Kremer was involved in the DAI’s curriculum as the curator and core tutor of GoodTrip BadTrip, a project seeking to relate the notion of the trip to effects of art: sensorial impulses, thought inducers. The project investigated legacies of Psychedelia and Conceptualism, it revisited the historical era of the 1960s when Psychedelia and Conceptualism were possibly more intertwined than what is today mostly assumed. In the early summer of 2008 the participants shared a working space in a villa on the island of Crete. In the very early Spring of 2010 they all embarked on a trip to Siberia, where on the island Olkhon in Lake Baikal they had a group session of eight hours with a Shaman.