DAI ROAMING ACADEMY MUST READ: Achille Mbembe on the idea of a borderless world. Published by Chimurenga in Chronic, October 2018. 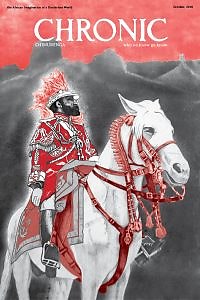 "From its inception “movement” or more precisely “borderlessness” has been central to various utopian traditions. The very concept of utopia, refers to that which has no borders, beginning with the imagination itself. The power of utopianism lies in its ability to instantiate the tension between borderlessness, movement and place, a tension—if we look carefully—that has marked social transformations in the modern era. This tension continues in contemporary discussions of movement-based social processes, particularly international migration, open borders, transnationalism and even cosmopolitanism. In this context, the idea of a borderless world can be a powerful albeit problematic resource for social, political and even aesthetic imagination"

In his essay, THE IDEA OF A BORDERLESS WORLD, first delivered as a Tanner Lecture on Human Values at Yale University in March 2018, Achille Mbembe argues that the power of the border lies in its capacity to regulate the multiple distributions of populations on the body of the earth, and in so doing, to affect the vital forces of all kinds of beings.