Hope this email finds you doing and feeling and seeming well!

How do you think the first session went? What are your memories and initial responses?

The image at the front of my mind is all the food that appeared at the centres of the tables that we used in different rooms throughout the community centre across the three days. The first evening the food was two boxes of baklava, varying in size and deliciousness-ness. It was the first evening and it was our first time meeting the other COOP people. You and I bought the baklavas but I did not help to pick them out. The baklavas slowly released their greases as we released energy and gently interrogated each other about why we had all turned up, and one piece of baklava at a time prodded each person awake because of its intense sugar content, just when that person felt themselves leaving the room mentally because we'd had a long day. Most of us slowly ate them, and then someone who wasn't in our COOP but was in another COOP turned up and finished them off.

A vat of fresh ginger tea 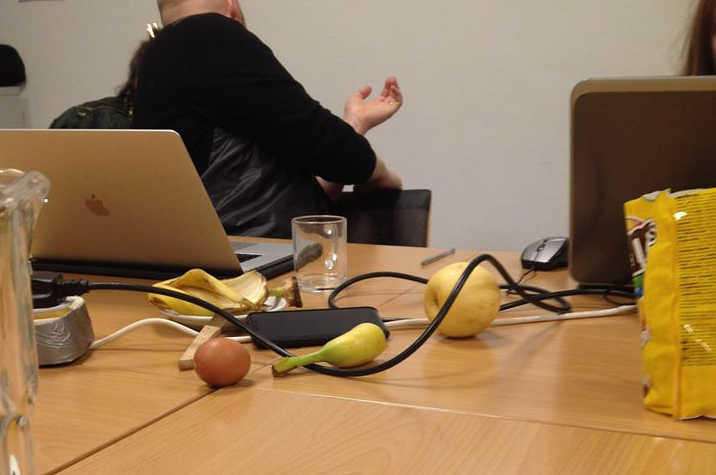 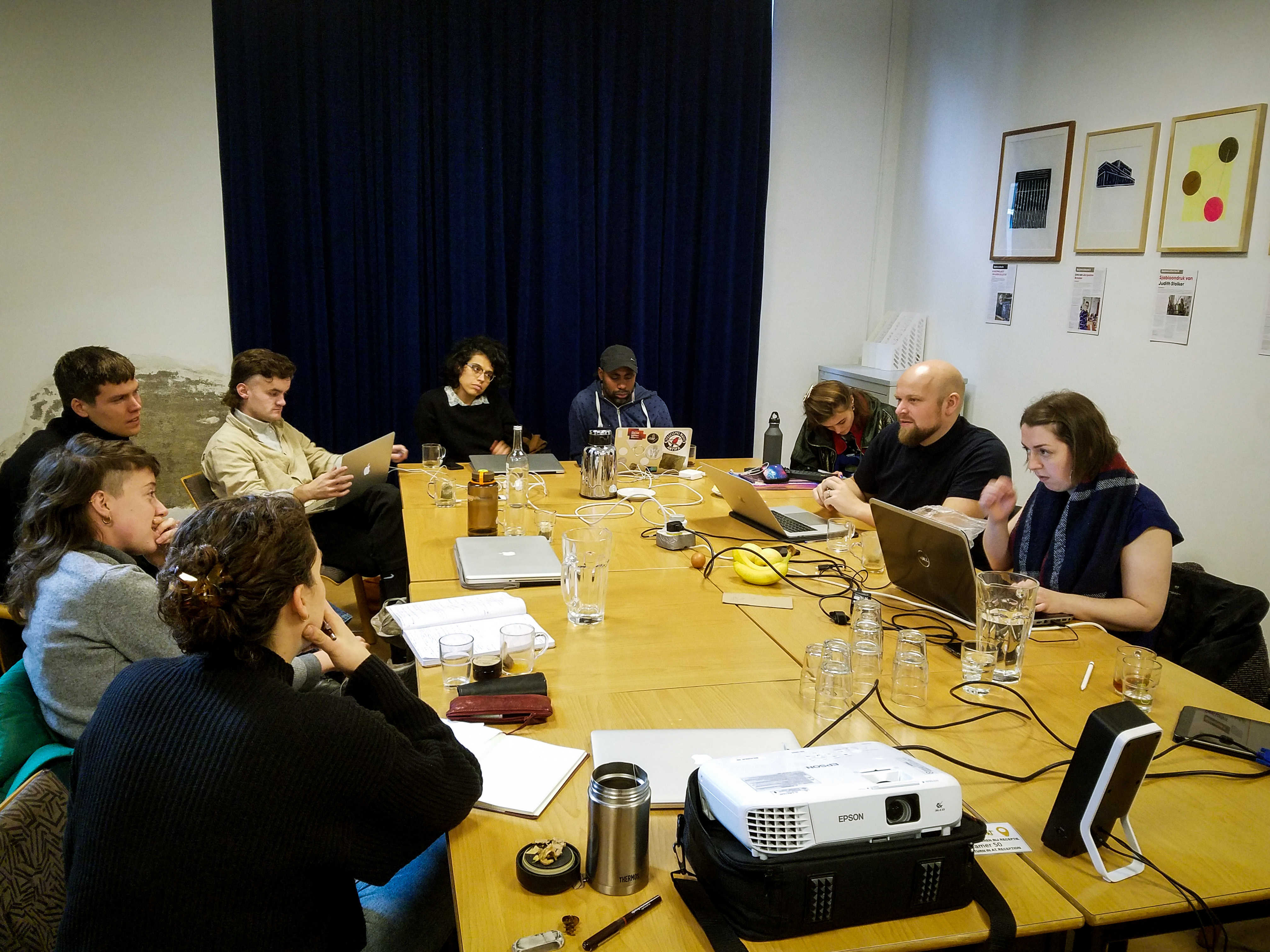 Tennis balls were also placed in the middle of the table, along with the food, to massage our backs with and the soles of our feet. The tennis balls came in a tube and smelt very new. Edel told us about a woman called Nan who had been her neighbour when she was a child, who worked in a tennis ball factory, and had a shed in her garden full of the flashiest editions of tennis balls, colourful and patterned. The tennis balls we had at our COOP sessions were a classic fluoro green.

Thanks for that email! Yes, we must be in the same COOP. I have a very clear memory of what you are describing.

Reading it, I think about those foods at the table while having those intense discussions about institutional/corporate organization, climate change, art production, food regimes. I remember the COOP-introduction speaking about the social and ritualistic aspects of a banquet, the shared meal in general, and what this enables in terms of organizing people, exchange of meanings and that very important homey feeling. Maybe we actually staged something like that during the days in Arnhem? A small conditioning prequel of what to come during the year?

One thing that stayed with me was (following a discussion about working with anti-capitalist commitments within multinational corporations) how the group quite unanimously wanted to, right away, call this woman who had been working on future scenarios for Shell. Not really to question her out. I just felt some genuine affinity for the complexity, contradiction, contemporary anti-clairvoyance (What would you call it? Did you get it this way too?), when this came up.

I liked the tutors.

I liked the film.

I really liked our group.

I liked going to the bar after class.

I liked that we started slightly late the last day.

How does this format work really? Pictures? How did you experience it apart from foods and tennis balls?

Yes I'm glad you brought that up, the moment when we all wanted to call the Shell woman! I imagined us gathered around a large conch shell, taking turns to excitedly yell words into it : contradiction! corporation! confusion!  Whether we get to speak to her or not, I consider our mutual enthusiasm as a useful sort of temperature gage that reveals our shared focus, and suggests where we will journey in the future.

After receiving Nikos's email about zooming in on two components, I feel we have already done that sort of... but maybe a satisfyingly definitive 'event' with a start and an end was the part where we watched the film Storm Children directed by Lav Diaz, do you remember? 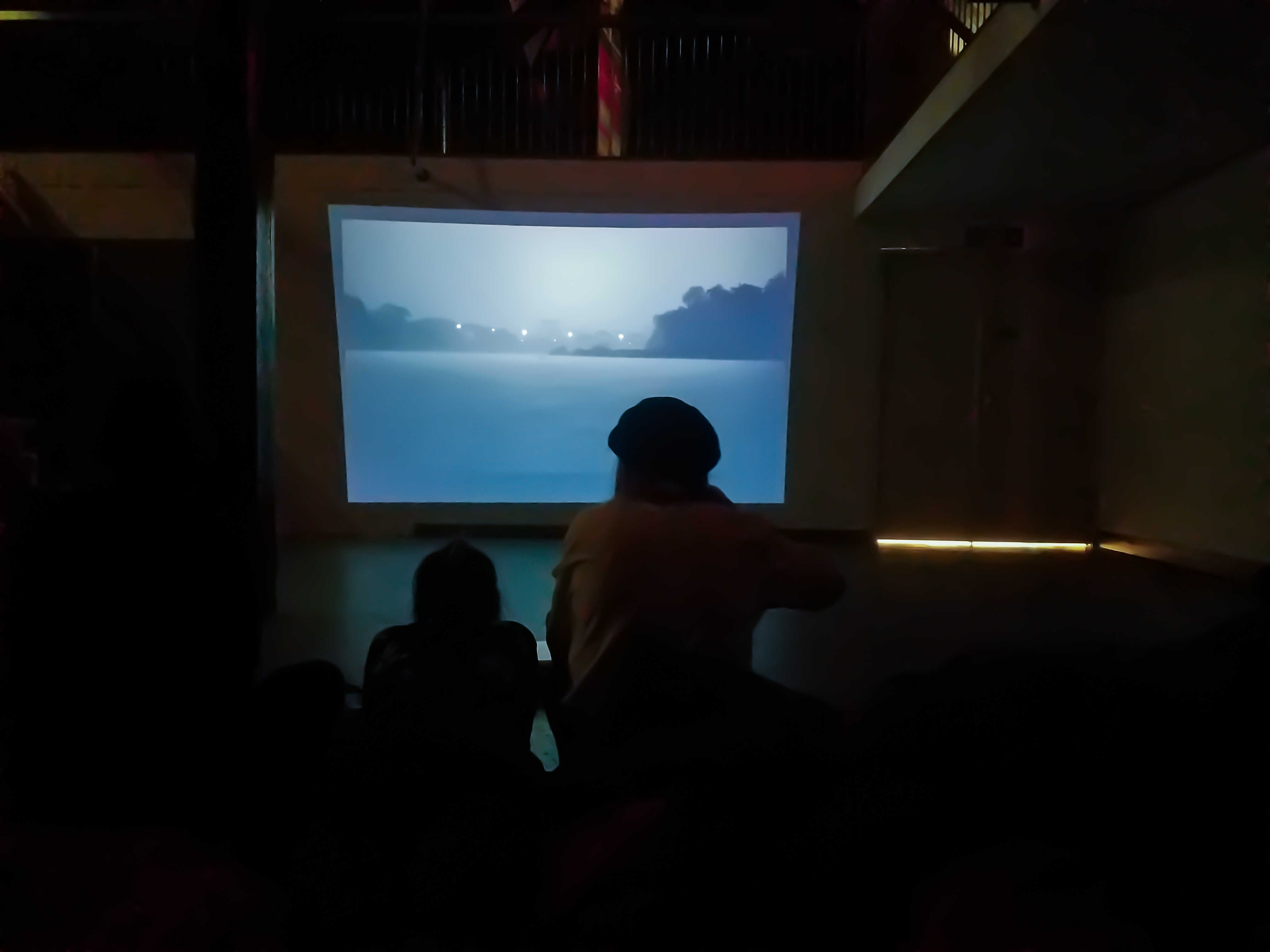 The two-and-a-half-hour documentary follows various children belonging to a community that is living in the aftermath of a catastrophic typhoon in the Philippines. In many ways, the film seemed to be a visceral and embodied portrayal of the quote by William Gibson that has featured in many of our discussions so far - that the future is already here - it’s just not evenly distributed. The next morning, we shared our impressions, and described the experience of viewing the film from our western safe zone. We discussed childhood, recklessness, survival, and voyeurism. We have since decided that watching-a-film will be a key feature of the following COOP sessions, as it gives us a welcome opportunity to process ideas in a meditative and relaxed manner, following on from our discursive/active formats.

Another component I would like to mention here in italics, because it is a component that so far has existed as an interval to Banquet X, is when you, Mandus, following on from introducing your connection to the COOP themes, started telling us in a series of chapters (we're poised to hear chapter three at the next COOP meeting) about the infamous 2003 rift in the Swedish contemporary poetry scene. Could these intervals potentially exercise Anne-Francoise Schmid's notion of the Integrative Object that we have been inspired by, in that the poet who caused this rift (whose name escapes me) needs to be considered as working within/between traditional disciplines/viewpoints/frameworks and who in doing so has brought into being an unforeseen poetry paradigm?! (just in Sweden)

Any other thoughts from your end, Mandus?

Thanks for that email, and, wow its a relief having some visual material in this lil convo too. I'm sorry got no pics from the Lav Diaz screening but I do have one of you, Assem and Lucie when we went to the fruit and vegetables store after class the last day, continuing the conversation about digestion and the position of the banana in the climate change discourse (although Lucie is checking out a kaki fruit on the pic).

Hope we get to phone this former-Shell woman (nudgenudge tutors). Anyway, I am much looking forward to the guest appearance of Jenna Sutela for the next session. Would be nice to speak to her about the less natural-earth-mother-gaia-centered perspectives on climate change, relating the the geo-engineering text from last time and her work on the extraterrestrial.

Concerning the Swedish contemporary poetry and its ruptures – I think I need to.. digest... this idea, read that text once more (also, I don't want to spoil the story..) Let's catch up on it in a few weeks! Intrigued by COOPing in this French monastery. 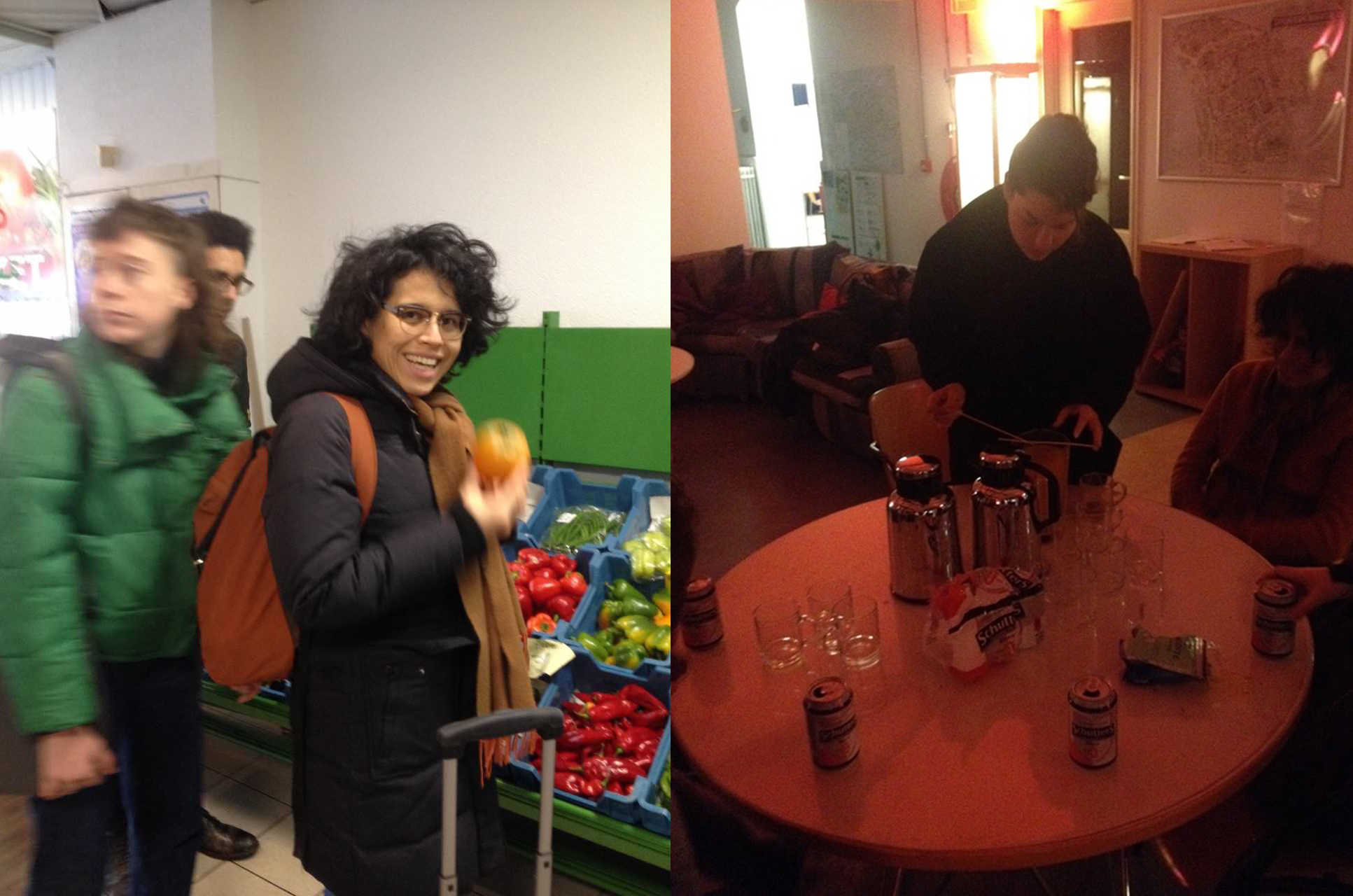