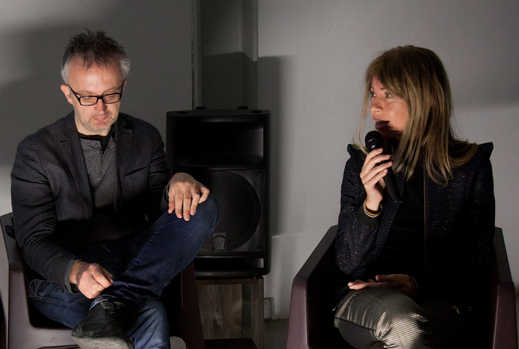 Graeme Thomson & Silvia Maglioni are filmmakers and artists based in Paris. Their practice interrogates potential forms and fictions emerging from the ruins of the moving image and includes the creation of short and feature films, exhibitions, sound works, film-performances, radio shows, vernacular technologies and books. Their work often makes use of cinema in expanded form to reactivate lost or forgotten archives and histories and to create new modes of collective vision and engagement with contemporary thought and politics.

Over the last ten years Thomson and Maglioni have collaborated to reinvent the possibilities of the essay film through a trilogy on the lost cinema of Gilles Deleuze and Félix Guattari, at the threshold between fiction and documentary: “Facs of Life” (2009), “In Search of UIQ” (2013) and “Disappear One” (2015). The films expanded into a series of installations, publications, sound works and performances. Other films include “Wolkengestalt” (2007), “Through the Letterbox” (2009), “Feeding Force” (2010), “Blind Data” (2013) and “Underwritten by Shadows Still” (2017).

During the last three years (2016-2018) Maglioni and Thomson were artists in residence at Les Laboratoires d'Aubervilliers (France) where they developed a research project, “common infra/ctions”, forging connections between infra-forms, strategies of unlearning and withdrawal, and idiorhythmic play, which culminated in the creation of a “Dark Matter Cinema Tarot” and a solo show, “Circumference of the (Common) Birds”.

Recently, Maglioni and Thomson have published a new book, “UIQ (the unmaking-of) / A Book of Visions” (post-éditions, 2018), a visual transcription of the eponymous soundwork the artists made as part of their multiform project on Guattari's unmade SF film “A Love of UIQ”. They have also produced a limited edition of the DMC Tarot (distribution Les Presses du Réel, 2018).

They are currently working on a new film, “Common Birds”, an experimental adaptation of Aristophanes’ play “The Birds” reimagined in the context of the ongoing global financial crisis, which proposes new alliances between sounds, images, languages and lifeforms.