Speaking truth to power is more important than ever! DAI endorses the Permanent Peoples Tribunal on Turkey and the Kurds which will take place on 15 and 16 March in Paris. Livestream: www.tribunal-turkey-kurds.org 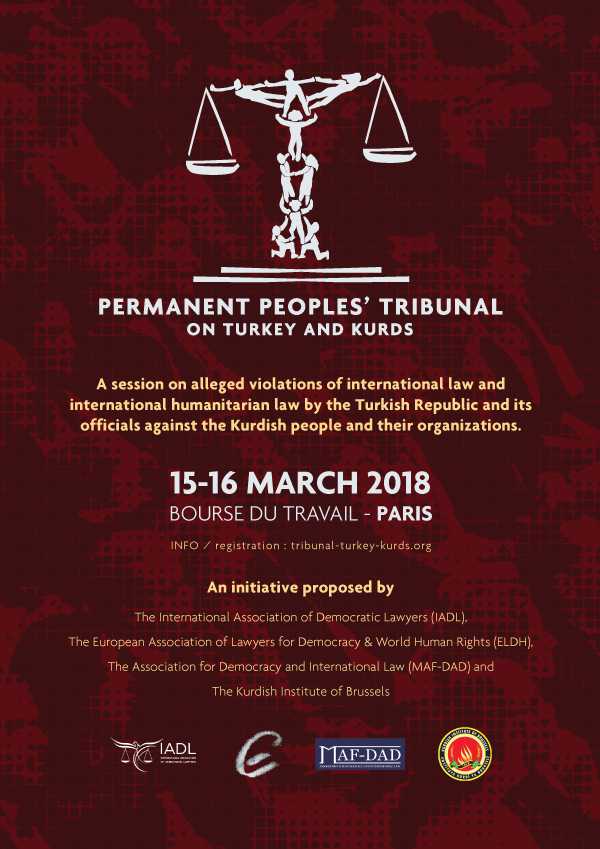 DAI wishes to convey this urgent call from the New World Summit to you - please help to spread it widely:

"The Permanent Peoples Tribunal is a Trial of Opinion in the line of the Russell Tribunals on Vietnam and Latin America initiated by Bertrand Russell and Jean-Paul Sartre. The Tribunal convenes in cases where no other (international) court has jurisdiction or when the courts that do cannot be considered impartial. It is a form of peoples' or stateless justice whereby the form of the Tribunal is used by the oppressed to speak truth to power.

In this case the 7 independent judges of the Tribunal will convene on 1. the alleged war crimes of Turkey in the southeast of Turkey, predominantly against the Kurdish population and 2. the alleged state terrorism of Turkey which includes the extra-juridical killings of activists in Europe by the Turkish MIT.

In the first case there will be particular attention to the events that occurred during the curfews of 2015 and 2016 in cities such as Cizre, Diyarbakir and Nusaybin. As no independent investigation has taken place a lot of the details (and in some cases even the number of deaths) are unknown. What is known is that entire neighbourhoods have been destroyed, many civilians killed, and that between 355.000 and 500.000 people were displaced (UN Human Rights Commissioner's report). The situation amounts to a civil war or internal armed conflict by the Geneva Conventions and not a 'police anti-terrorism action.' International humanitarian law should apply in such a case and therefore the actions of the Turkish State will be judged accordingly during the Tribunal. In the second part there will be a particular focus on the murder of the three women activists in Paris in 2013 (Sakine Canzis, Fidan Dogan and Leyla Soylemez) for which there is clear evidence that was coordinated by the MIT. However, as the suspect of the killing died in prison this has never been legally investigated in a court setting.

This Tribunal will be a very important political moment as it comes in the middle of ongoing crackdowns inside of Turkey as well as Turkey's attack on Afrin, Rojava, North Syria. In addition, European states increasingly use anti-terrorism legislation to oppress and prosecute Kurdish dissidents and activists as well as Kurdish TV stations, media platforms and cultural centers inside of Europe. Only recently PYD co-chair Salih Muslim was detained in Prague and this week the Mesopotamia publishing house which publishes the books of Abdullah Öcalan and Sakina Canzis in Germany was closed down by the German police. Last week, one of the speakers of the New World Summit: Utrecht. Member of Parliament of Turkey for the HDP - Dilek Öcalan - was convicted to 2 years and 6 months’ imprisonment for "terrorist propaganda."

In order to shed light on the situation and come to a verdict that is strongly supported by a wide range of organisations and people we would like to invite you all to attend the Peoples Tribunal in Paris. Secondly we would like to ask all of you to speak out in support of the Tribunal by endorsing it officially and to spread the invitation of this tribunal as widely as possible through your own networks.

The tribunal will be livestreamed on www.tribunal-turkey-kurds.org and youtube as well, for those unable to travel to Paris.

The verdict will be given by the judges in one-month time in the Bar Association in Paris and in the European Parliament in Brussel and assuming we urge you to use both the tribunal and the verdict to take political action and pressure your local governments, national states, civil society organisations and cultural centers to do the same as crimes should go unnoticed or be left without consequence."