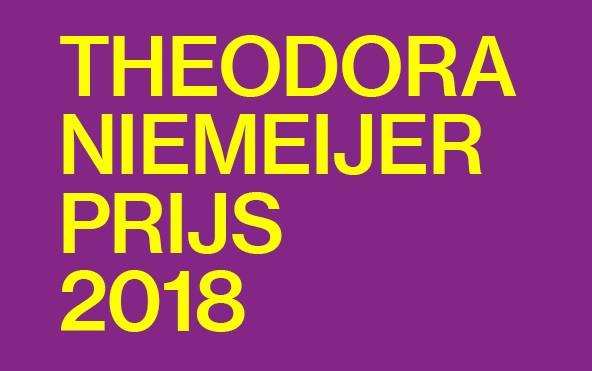 In 2018, Stichting Niemeijer Fonds (Niemeijer Fonds Foundation) and the Van Abbemuseum organise the fourth edition of the Theodora Niemeijer Prize: an incentive for emerging women artists. It is the only Dutch prize for visual arts specifically dedicated to women. The prize was introduced in 2012 because women are still a minority in exhibitions and museum collections.

The prize, with a value of € 10,000, will be awarded once every two years to the artist who presents the best project proposal for Het Oog (The Eye). The winner is also offered the opportunity to actually realise her project from September 2018 for a period of six months. Het Oog is an oval shaped outdoor space in the Van Abbemuseum and serves as a platform which is made available for six months to the artist who is selected. The second and third place receive €2.500 and €1.500 respectively.

The period for submitting project proposals is until 30 April 2018.

WHO CAN SUBMIT A PROPOSAL?

You can submit a proposal for the Theodora Niemeijer Prize if you comply with the following criteria:
- Female visual artist;
- Living and working in the Netherlands;
- Graduated at most 5 years ago;
- Available between end of September 2018 and end of March 2019 to realise the project.
If you meet these criteria you can submit a proposal for a project, together with your CV, a max 1 page project proposal and a budget.

In addition to the criteria mentioned above for submitting the proposal, the following guidelines apply for selection:
- The project takes into account the special characteristics of Het Oog: an outside space which is visible from the museum, but also (partly) from public space outside the museum, situated between the restaurant and the museum areas. If necessary, the space is accessible to visitors.
- Preference is given to projects which have a performance element or where the creative process is visible to visitors in the space.

Proposals can be submitted until 30 April 2018. They can only be submitted digitally, via theodoraniemeijerprijs@vanabbemuseum.nl.

WHAT DO YOU NEED TO SUBMIT?

- A short description of the project (max. 1 A4)
- The project proposal, including sketches, photographs, etc.
- A budget
- Curriculum Vitae
- Contact details (name, address, e-mail address, telephone number, website if you have one).

Do you have any questions? Please contact us via theodoraniemeijerprijs@vanabbemuseum.nl.

End of May, the jury will select three finalists. The winner will be announced on Saturday 23 June at 3 p.m. Her project will be on view from September 2018 onwards.

Theodora Niemeijer (Groningen 1912 – Laren 2004), the daughter of the well-known tobacco producer Niemeijer in Groningen, was a very special character with a passion for the visual arts. In 1996 she established her own foundation with the aim of encouraging young artists. She died in 2004, but Stichting Niemeijer Fonds still exists and donates a generous sum to different artists, from musicians to visual artists, every year. More about Stichting Niemeijer Fonds:

Het Oog (The Eye) is an oval shaped outdoor space in the Van Abbemuseum. It serves as a platform which is made available for six months to the artist who is selected. The public has the opportunity to see a work of art being created, and can be introduced to the artist. The interaction between the museum, the artist and the public is important for the Van Abbemuseum; it's no longer a matter of "passively" looking at art objects. The museum is a living institute, made by and for people.