DAI warmly recommends: Tony Chakar's exhibition at the Van Abbe Museum ~ AS IN A BEGINNING ( till April 22). 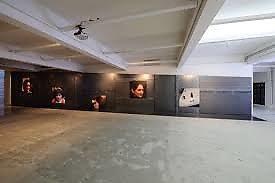 The Van Abbemuseum is delighted to present the celebrated Lebanese artist, writer and architect Tony Chakar. The exhibition As in a Beginning on the 2nd floor of the collection building includes two major works that have been developed over the past three years and will be shown in Europe for the first time. The first is the installation Of Other Worlds that Are in this One (2014-17) that the museum has recently acquired for its collection. The second work is The Discourse of the Last Things Before the First, 2017.

OF OTHER WORLDS THAT ARE IN THIS ONE

Of Other Worlds that Are in this One (2014-2017) was first shown at the 31st São Paulo Biennial in 2014 and developed further in Chakar’s major solo exhibition On Becoming Two at Beirut Art Centre in 2017. A metal wall holds images of strangers that Chakar discovered by coincidence through facial recognition software in photographs of empty cityscapes taken during his travels. The randomness of the software, and its regular failure to distinguish a human face from an object, show an irrationality in the midst of what is considered the most rational of all human constructs. Chakar identified them as ‘moments of vision’ – as mystics might describe them. They appear as ruptures in the fabric of our world that might allow insight into ‘another world that is in this one’. The images are combined with texts from esoteric writings – Muslim, Gnostic Christian and Kabballah mysticism – which are cut out of the metal wall and thus become negative tracts. The light from the exhibition space projects the texts on the wall behind the metal, creating a game of light and shadow in the narrow corridor behind that disturbs the cold, sharp logic of the materials.
Of Other Worlds that Are in this One was acquired with the support of the Stichting Promotors Van Abbemuseum.

THE DISCOURSE OF THE LAST THINGS BEFORE THE FIRST

The Discourse of the Last Things Before the First, 2017 brings together different representational systems for apprehending the visual world. A traditional Christian icon is painted large on a gold field representing the divine. Around and about it, a complex representation of secret knowledge, drawings in modern linear perspective (from the Renaissance until today) meet texts about economics and value systems. As Tony Chakar put it: “The perspective way of seeing the world was truly revolutionary when it was established in the Renaissance. Its beauty came from its simplicity and from the absolute rationality of its process. But the end result was a representation of the world as a world of things, things that can be quantified, and “touched”, and owned.” Bringing together fragments from different times and places, The Discourse of the Last Things Before the First attempts to capture the falling apart of the modern world as it was built through representation.

The title of the exhibition - As in a Beginning - refers to the figure of Homer, the storyteller in the film Wings of Desire from 1987 by the German director Wim Wenders.

Tony Chakar lives and works in Beirut. Since 1999 he has developed projects that address the complex social and political histories of his hometown and region. The material evidence of war and conflict that have stood in the city since the Lebanese Civil War 1975-1990, are intersected by jarring moments of renewal and gentrification – as though everything is happening simultaneously. Against this background, Chakar explores the idea and reality of public space and how different temporalities and communities come to recognise and use it. The religious complexity of Lebanon also leaves its mark on the work, as the world’s major monotheist religions still battle it out for supremacy in the region. In the works in the exhibition, he uses language, images and architectural forms to create a bodily experience of narrative where time is out of joint and modernity meets its limits.

Tony Chakar has been a guest lecturing and guest teaching at the DAI at numerous occasions in Enschede, Beirut and Arnhem.