Invitation: Exhibition opening by artists-in-residence Arum Dayu and Das Archipel at the Cemeti-Institute for Art and Society 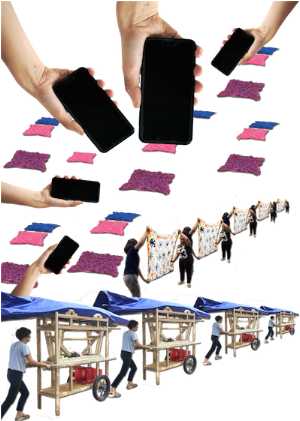 | tag: Yogyakarta
On Thursday 23 November 2017 at 19.00 hrs the final presentation by artists-in-residence Arum Dayu (Bandung, Indonesia) and Das Archipel (Nuriye Tohermes and Finn Brüggemann, Hamburg, Germany) is opening. During the past three months, Arum, Nuriye and Finn have lived and worked at Cemeti Institute and actively engaged with the local context of Yogyakarta, with support of programme assistant Khairunnisa and the Cemeti team. From 23-30 November, Arum, Nuriye and Finn will present works and documentation from their evolving and multi-form projects, which have been taking place in various sites across the city and the Internet, with a range of different communities.

Starting from an interest in millennial experience and the use of technological devises for communication, Arum Dayu has been exploring the ways in which smart phones and other personal electronic devises (PEDs) shape our lives and mediate our experience of reality. Arum, who not only works as an artist but also as a musician, began by creating a collaborative music project called Klout with Hannah Ekin and Ayash Laras. Working with project organisers Sekutu Imajiner, Klout organized an experimental music gig at Cemeti entitled See The Grid, Feel The Gig. Following a series of warm-up acts, located both in the gallery and streamed from the artist’s hometown of Bandung, Klout’s performance began. Whilst being physically present in the same building, the audience and the band could not see each other. Their relationship only existed by means of a live stream on Instagram. The gig can be seen as an experiment, allowing Arum to explore our increasing reliance on our devises, the human and the post-human. For this exhibition Dayu will re-present elements taken from this performance in a multi-part installation in Cemeti’s gallery, using virtual reality, online platforms and constructed scenarios.

At the start of their residency period with Cemeti, Hamburg based artist collective Das Archipel wanted to experience first-hand some of the daily working routines in Jogja to better understand local economies and labour conditions. So they got a job, spending a week working 8am–5pm in a commercial batik studio alongside a group of recently graduated women. Subsequently they worked at a family-run wood workshop building an angkringan (food cart), which they named Jagongan Archipel (Jagongan means to hang out, chat, drink or eat together). Das Archipel parked their angkringan in public spaces across the city and initiated conversations around issues of labour, resistance, future utopias and collective values. For each conversation they invited specific groups they had met along the way; the young women working at the batik studio, transport union workers, debt collectors, an informal school in Kali Code, as well as those passing by in these public spaces, to join in a collective activity of making or re-making different objects relating to the context, whilst the conversation unfolded. Together, they addressed questions such as “How do economic systems shape our daily lives and (re)produce separate identities?”, “What´s your image of an alternative future?”, “Can collectivity make space to rethink the way we organize, produce and live together?”. This week, Das Archipel will bring the different groups they have been working with together for asyukuran, a celebratory moment to build connections between the groups and broaden the collectivity. Their aim being to overcome the lines that often separate both individual and collective forms of solidarity which attempt to resist dominant power structures. For the exhibition at Cemeti, Das Archipel will present a series of videos documenting these social processes, as well as a range of objects collectively made with some of the groups which attempt to utilise the economic systems of art to support their collaborators.

If you like to know more about Cemeti's residencies, exhibition and activities programme, visit their website here.