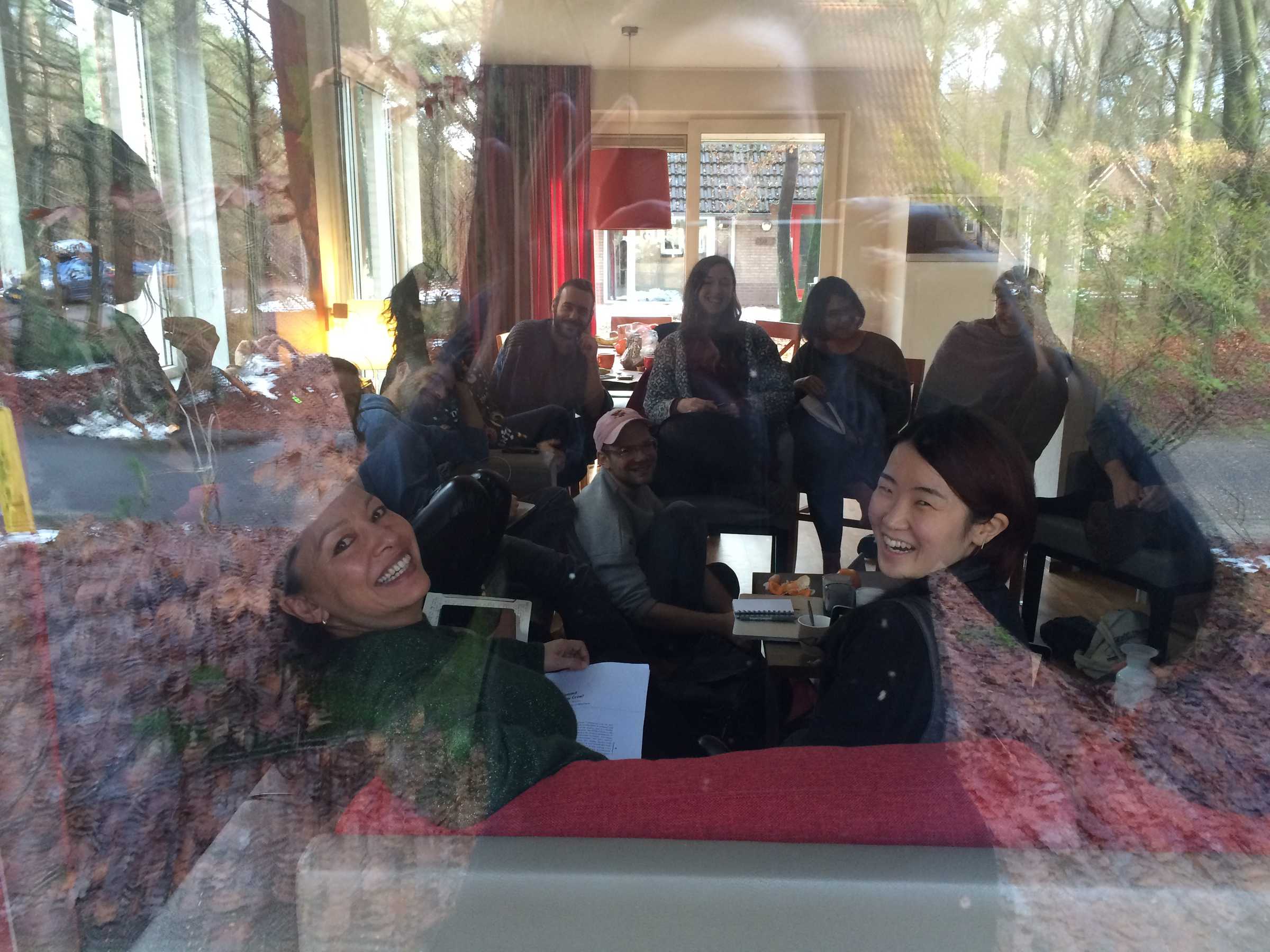 This year’s seminar will think through questions of paraontology (in relation to paralanguage and paradoxography) and the category of the contemporary. We will engage with Nahum Chandler’s work on paraontology and Cedric Robinson’s ‘black radical tradition’ via a study of aesthetics. Fred Moten’s thought and practice will be a guide for us throughout the course as we consider the radical non-contemporariness of the racial category (Frank B. Wilderson) and the ways in which being a non-subject, a non-contemporary, is to be a temporal and ontological problematic. Paraphrasing Moten we can ask: If this ‘radical non-contemporariness’ is before the subject and in excess of understandings of freedom’s limits then what does this mode of being paraontologically do to forms of narratives that usually appeal to notions of the subject and freedom? In approaching Moten’s concerns regarding blackness and non-performance (we will include the transectionalities of brownness, gender, class, indigeneity, queerness, transness, and more here), and their refusal of those contracts of relation which function as conditions for subjecthood, property and understandings of ‘freedom,’ the question of paraontology becomes particularly significant and generative. In forgoing the contemporary as determined by its opposite, in refusing readings of the non-contemporary as deficit, lack, default, inadequacy, failure, and to do the above as theoretical practice we would need to, as Chandler writes:

“reflect upon the possibility and the necessity for theoretical work to cultivate an order of critical theoretical fiction as a fundamental dimension of its practice. Whereas, I believe such theoretical work must of necessity occur without or beyond any name, as such, it remains that if we take it as otherwise than a thought of the historical as oriented first of all or ultimately by existence as being, I would propose to think of the concern of such practice as a paraontology. In my ongoing meditations on this problematic such question definitively marks the whole terrain of a politics – a theoretical politics if you will – the practices of a paraontology that might address our common contemporary colonial and postcolonial nexus on a worldwide ensemble of horizons.”

Chandler’s important intervention re-poses sociologist W.E.B. DuBois’ ‘the problem of the color line’ as the worldly problem and concern (condition of possibility?) of modernity and re-poses DuBois’ question ‘How does it feel to be a problem?’ via a necessary turning to how being a problem is always already to be a problem for thought itself. Therefore, the imperativeness of responsibility in face of the unspeakable, the necessity of critical theoretical fictions as fundamental practice, as a ‘theoretical politics,’ a doing (with) theory.

In light of the above and if, as Denise Ferreira da Silva insists: “The racial is the single most important ethico-juridical concept in the global present,” we must ask: Who gets to be a contemporary? How do different yet shared experiences of historical dispossession also share being in non-contemporaneity? What does this mean for our image making? Our narrative making? Within a system that claims itself a contemporary art world? How to affirm/perform this non-contemporariness as a process of abolition?

One way to begin to think through these challenging questions is to delve into the realm of the paralinguistic (the entanglements of sound, gesture, tone, rhythm, texture, feel – those material features of language not generally understood as part of the language system) and how the study and valorizing of paralanguage disrupts normative narratives that define ‘para’ as merely auxiliary or derivative to a norm. Paralanguage’s undeniable materiality as condition of possibility of language is the disruption of these approximations and philosophies of language that bracket or ignore sound, the phonetic in linguistics. We will touch language then so as to recognize language as made and thus open to being remade, to exceed representational social patterns seeking to generate rational subjectification. Anti-colonial neologisms, paralinguistic performances, texts, songs, poems, sounds that veer away from meaning by touching language’s materiality dismantle and reconfigure language’s being as a mere means to an end. Paralanguage points to an excess of language’s measurement and definition, precisely via the expression of the nonsensical that is integral to language. Sounds make words different from another; sense relies on nonsense - infinite nonsensical combinations of sonic difference. It is in these realms where communication recedes and becomes communicability instead, and it is this communicability that enables the materialization of the unthinkable, unimaginable. How does the study of paralanguage disrupt and resist the power that determines the sovereign, the subject? How does paralanguage affirm non-exclusionary improvisations of collective being?Could paraontology as well as paralanguage be about a radical dispossession of the self by way of the refusal to re-state? By a refusal of the accumulative norm? How does ontological and expressive dissonance resist the power that states and solves, that subjects and subjectifies?

There is a fugitivity to paralanguage, a performative polyvalence, as José Muñoz writes, which as structure of feeling can be a ‘fleeting modality of anti-rigor and anti-evidence’ that expands materiality through ephemeral traces, glimmers, residues. One could argue that such is the work of the ancient paradoxographer who writes of the marvellous in natural and human worlds, such as monsters and ghosts. According to Rachel Hardiman syncretic Hellenistic Greco-Egyptian paradoxography is a literary genre:

... parasitic on historical, geographical, ethnographical and scientific writings, it dons the guise of Alexandrian scholarship in the careful citation of the sources on which are constructed its claims to truth. Paradoxography is produced by compilation and excerption, but unlike the former resolutely refuses to place its pillaged data in any theoretical – or, frequently, even formal – framework. Paradoxography... constructs a conceptual space where, there being no given norm against which to measure them, the fantastic and unbelievable themselves become the norm, the external world reduced to a paratactic yet disjointed sequence of the bizarre and ‘unnatural.’ Yet these marvels are all ‘true’, all culled from ‘authorities.’ Monstrous or multiple births, hermaphrodites, oracle-spouting severed heads, and spectral revenants take the place of the comparatively mundane curiosities of the natural and cultural spheres.

We will borrow the paradoxographer’s method for our study, become paradoxographers of study, and read and disjointedly write of worldly and other-worldly things and ways as instances and instantiations of the necessary theoretical fictions Gayatri Spivak speaks of. Perhaps our fabulations, orientations and breaks are already, will remain, and can be paraontological monstrous possibilities and potentialities of chthonic, underground, experimental performancescapes, Benjaminian magic thresholds.

Paraontology Paralanguage Paradoxography: our study of these para’s will disrupt and trouble the contemporary. We will engage with questions of order, the terms of order in Robinson’s terms, as well as the calls to order by way of notions and practices of Da Silva’s poethics, fractal thinking, affectability, and dissent as non-performance as well as performancesacpe. We will grapple with the ways in which artistic and cultural practices, by way of their myriad articulations and (dis)organizational forms, offer clues and modes as and for compositions of social life as art. Danielle Goldman reminds us that improvisation constantly negotiates and works against and through sets of shifting constraints (economic, physical, social, material etc) and thus, in addition to an in-depth engagement with examples of certain strategies, actions and enactments, while always emphasizing practice as method and theory made material, we will contend with formations of refusal and escape, which is to say, we will be thinking about the questions raised by those performances that refuse to perform in a certain way, that refuse certain calls to perform. The question of how we improvise collective wildness, waywardness and dissonance in tight places then, as practice and constant struggle, also becomes one of imagining, collaborating, and living otherwise.