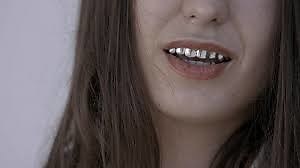 Vleeshal is proud to present Lili Reynaud Dewar’s ‘Teeth, Gums, Machines, Future, Society’ (TGMFS). After Hamburg and Bolzano, this film, performance and exhibition now travels to Middelburg, where it takes on a new form – in response to the late-Gothic architecture of Vleeshal Markt and in dialogue with Middelburg’s history of colonialism and slave trading.

TGMFS has been programmed at Vleeshal Markt from June 24 onwards to coincide with the 8th Middelburg Decolonial Summer School, organized by the University College Roosevelt (UCR) from June 27 till July 13. This year’s Summer School will take place in Vleeshal Markt (a former meat market back in the days when the building was still the town hall). It will ‘explore decolonial horizons of living in harmony and conviviality. To do so it is necessary to unlearn dominant structures of knowledge and assumptions taken for granted about life, politics, nature, race and sexuality. The 2017 Summer School will be an exercise in shifting the geographies of knowing, sensing and believing.’

‘Shifting the geographies of knowing, sensing and believing’ could be a description of Lili Reynaud Dewar’s art practice. In her work, Reynaud Dewar explores the sexual, racial and political conditioning and stereotypes that influence our cultural identity. She deliberately breaks with conventions and traditions in order to explore them and to create a space for thought in which the viewers can and must form their own opinions.

For TGMFS Reynaud Dewar travelled to Memphis, Tennessee. Due to its strategic location in the southwest of the United States, the city developed itself as a major center of slave trade, yet became the center of the Civil Rights Movement centuries later. The same streets that were the stage of trafficking and trade of enslaved people, became the backdrop of the historical 1968 Memphis sanitation strike, that preceded Martin Luther King’s assassination. Memphis also plays a pivotal role in the history of American music, giving birth to Blues as well as housing the final resting place of Elvis Presley. In recent years the city plays a vital role in contemporary rap culture. In her film and performance piece, Reynaud Dewar explores these topics of civil and urban history and objects that have become intertwined in these narratives. Similar to the city of Memphis, Middelburg has its share in the history of colonialism and slave trading. As a strategically located port, Middelburg was one of the major Dutch locations for colonial trade and transport of enslaved Africans.

TGMFS revolves around two main themes. On one hand it explores the human body, or rather a particular, intimate element of it: teeth. The artist explores stories, practices and identities that gravitate around grills, the teeth decorations that are a contemporary status symbol in rap and hip hop culture. Another key element of the show is Donna Haraway’s essay ‘A Cyborg Manifesto’, published in 1984. In this feminist essay, the cyborg functions as a metaphor for the dissolving boundaries between humans, machines and animals, which could possibly lead to a system and state that is no longer defined by gender, race nor class.

For the exhibition at Vleeshal Markt, the artist produced a new film that was shot at Vleeshal Markt. The screening of the film and subsequent performance – with  Ashley Cook, Darius Clayton, Hendrik Hegray and Lili Reynaud Dewar –  took place during the opening on June 24.

The exhibition ‘Teeth, Gums, Machines, Future, Society’ is a co-production between Vleeshal, Museion in Bolzano and Kunstverein in Hamburg, and is accompanied by a publication.

Lili Reynaud Dewar (1975 in La Rochelle, France; lives and works in Paris and Grenoble) received her Master of Fine Arts from the Glasgow School of Arts. In 2013 she was awarded the Prix Fondation d'entreprise Ricard. Solo exhibitions and projects by Reynaud Dewar have been shown at, among others, the New Museum, New York, the Studio Museum, Harlem, the Centre Pompidou, Paris, the Museum of Contemporary Art, Chicago, Kunsthalle Basel, Generali Foundation and the 21er Haus, Belvedere, Vienna, and Index, Stockholm. In 2015 she took part in the International exhibition of Biennale di Venezia, curated by Okwui Enwezor. Along with Dorothée Dupuis and Valérie Chartrain, she is co-founder and editor of the magazine ‘Petunia’ for feminist art and entertainment.