Yunjoo Kwak (DAI, 2011) participates in the exhibition Mass and Individual: The Archive of the Guyanese Mass Games at Arko Art Center, Seoul 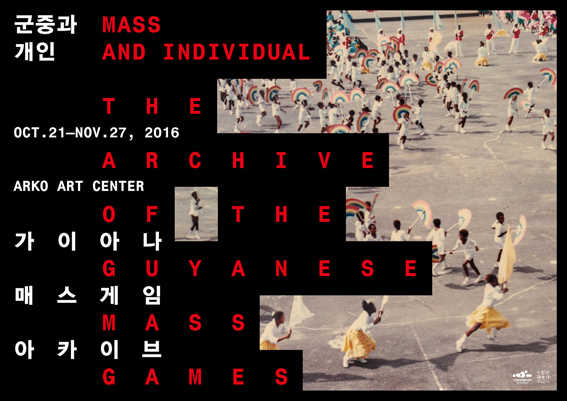 While Korea experienced imperialist military competition, World War II, the Cold War, division, and political upheaval first-hand in East Asia, on the other side of the hemisphere, Guyana experienced a similarly tragic history of modernity in the Caribbean. During three hundred years of European colonization, Guyana saw the dislocation and extinction of Amerindian people and cultural heritage, and the division of their land. The newly independent Guyana underwent Cold-War ideological conflicts and the political extremes of a socialist regime and a pro-US neoliberal regime.

This exhibition consists of an archive collection of the Mass Games in Guyana in the 1980s-90s and contemporary artists’ works that explore the theme of “mass and individual.” The Co-Operative Republic of Guyana, a socialist regime in the independent Guyana, was fascinated by the collective identity portrayed in the North Korean Mass Games. Guyana invited North Korean artists to learn how to stage such spectacles. Guyanese artists incorporated their own cultural elements into the North Korean Mass Games and staged the event annually. The Guyanese Mass Games show interesting cultural elements: They manifest distinctive cultural codes of the postcolonial and the Cold War eras, critical aspects of collectivism in the performing arts, an alteration of Socialist-Realism by incorporating local elements, and the transnational exchange of art and culture via sharing an ideology.

The exhibition suggests that such a cultural spectrum was not simply a trend in the past; rather, it is still an ongoing issue in contemporary visual art. Participating artists Jungju An, Joonho Jeon, Yunjoo Kwak, Suntag Noh, Polit-Sheer-Form, and Diana Yoo demonstrate that such cultural elements are still influential in our contemporary life and culture. The exhibition presents the significant cultural implications of the Mass Games and the contemporary works and, in doing so, invites the viewers to think about the visual culture surrounding us today. We invite the viewers to encounter a unique intersection of history and reality as well as the disparate geographic spaces and times presented together in the exhibition space. During the exhibition, four public and academic programs including lectures, talks, and screening will be held to explore the collectivism of modern nations.

The exhibition garnered the largest prize of the 2016 Arts Council Korea Exhibition Grant.