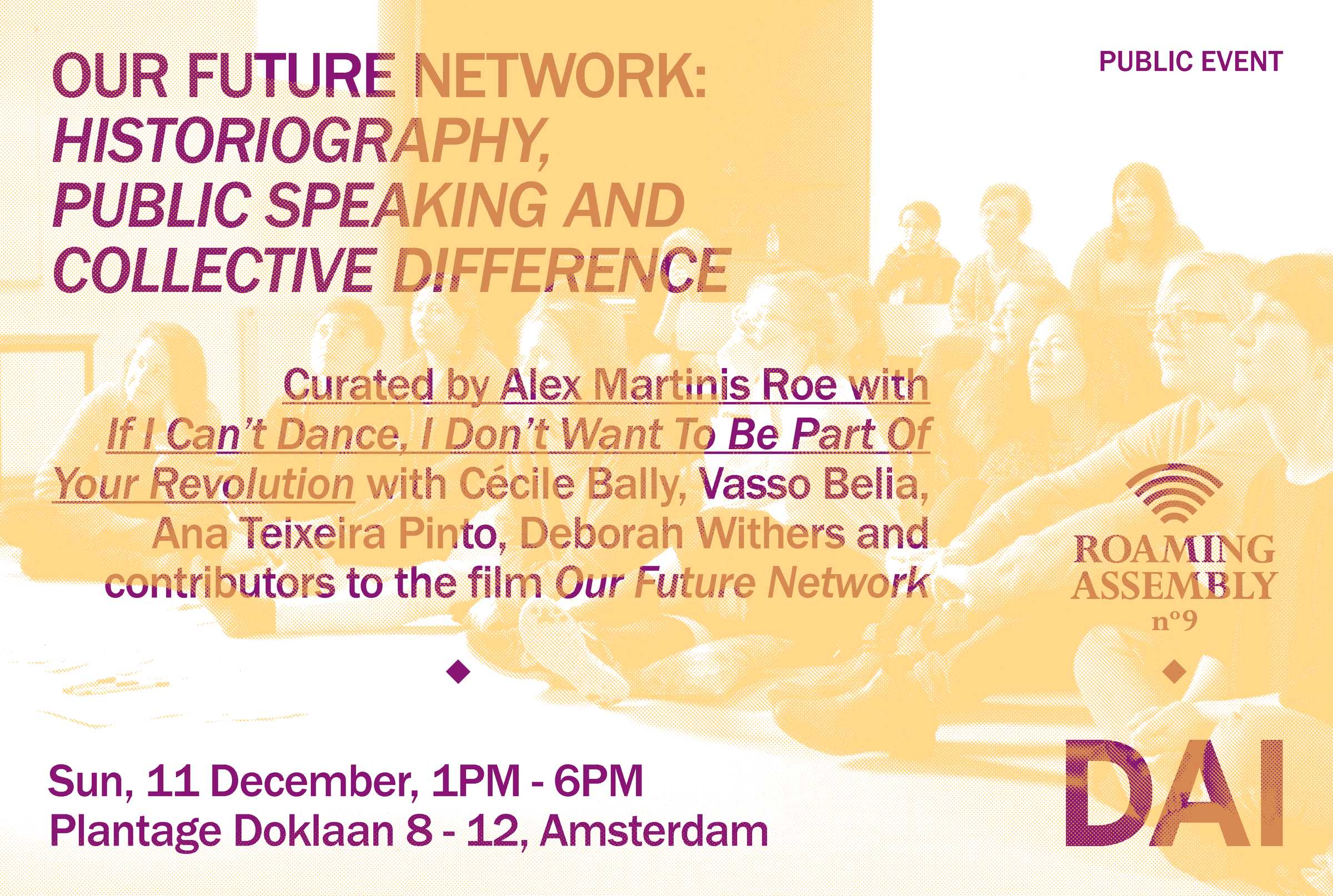 A day-long salon with Alex Martinis Roe and guests as part of  If I Can’t Dance, I Don’t Want To Be Part Of Your Revolution's Edition VI—Event and Duration (2015 – 2016) Finale

This daylong salon will explore different strategies for engaging with and constructing feminist histories, in dialogue with contemporary needs, desires and practices. The artist Alex Martinis Roe, will host a group of invited guests that stage proposals and responses to ideas and methodologies presented in her feature length film Our Future Network (2016). To make the film, Martinis Roe engaged a younger generation of feminists—who she met during her research into international historical feminist practices—to participate in practical and performative experimentation with historical political practices, from this, eighteen propositions for new feminist collective practices were developed out of a dialogue between these practices and each contributor’s existing methodologies and concerns.

The day will comprise presentations and responses from Deborah Withers and Ana Teixeira Pinto; a screening of Our Future Network; and live contributions from participants in the film, including the choreographer Cécile Bally, and the literature and gender studies scholar Vasso Belia, who with fellow members of the Gender Studies community at Utrecht University, will enact some of the propositions for new feminist collective practices.

With the participation of:

Overview of the day:

Welcome by Gabriëlle Schleijpen (DAI) and Susan Gibb and Frédérique Bergholtz (If I Can’t Dance, I Don’t Want To Be Part Of Your Revolution) and an introduction by Alex Martinis Roe followed by the

Screening of  Our Future Network by Alex Martinis Roe

Our Future Network is part of the To Become Two series, which traces a particular genealogy of political practice among a number of different feminist communities. Each of the videos explores the currency of these historical political practices through their practical experimentation amongst a network of women from a younger generation. This new feminist network is the focus of the feature length Our Future Network (2016), which involved a four-day meeting in a country house outside Berlin. This meeting of 22 female contributors, who came from all over Europe, involved the enactment of 20 “propositions for feminist collective practice”, each of which was developed as a collaboration between the artist and each contributor in the months leading up to the meeting. The central question addressed to this new network is: what can we learn from the practices developed by these historical feminist collectives, and how can we adapt these practices to our own needs, desires and contexts?

Lecture Performance by Cécile Bally ~  ALL THE THINGS SHE SAID

This lecture performance draws on the practice of public speaking as a feminist tool and as a performing strategy, to re-examine some clichés linked to women's public speech and to reflect on a new practice of listening.

This performance will reflect on the status of consciousness and political change within feminist history, discussing the technique of Consciousness Raising as it appears within the archive of the UK Women's Liberation Movement. Using the form of a letter to respond (and relate with) Alex Martinis Roe's work, Deborah Winters questions what it means to re-perform feminist activist practices across different technical-historical contexts, leveraging the letter to enact the recovery of autonomous interior/private expression. The performance will highlight the fragile formulation of (public) consciousness within digital networked cultures, where private thoughts are distributed on 'public' platforms and then rapaciously privatised by capital. How are public feminist circuits forged in these conditions? How can private thinking be sustained and supported? How can the relation between public and private be reconfigured within the deep felt uncertainties of the 21st century?

Performance by Vasso Belia ~ Subject and Object and the nature of reality: merging a novel, a comic and a reading methodology into a play

This short play discusses two major approaches to knowledge, the relationship between knowledge and desire, and how we can read different texts together. Characters from Virginia Woolf's novel To the Lighthouse and Alison Bechdel's graphic memoir Are You My Mother? meet on stage to discuss and rethink their relationship to each other and the world. Featuring: Cécile Bally, Vasso Belia, Svenja Engels, Janneke Koers, Juliette Sanchez-Lambert, and Evelyn Wan.

The lecture will discuss the political propositions made by Alex Martinis Roe's films, and the phenomenological experiences they engender—the raw material aesthetics is made of—as well as their expression of political agency and collective enunciation.

Wrap up by Alex Martinis Roe and Susan Gibb

Although closely interlinked with the DAI's academic activities, the editions of this state-of-the-art speculative and hybrid program are not conceived as plain extensions of the regular DAI-seminars and classes, but rather envisioned as sovereign happenings, aiming to mobilize our bodies, our intelligences.

Around 18:30, a dinner (prepared by our amazing vegan chef Mari Pitkänen and her team) will be served on location. Costs for visitors: € 10 for food & wine. If you wish to join us for the dinner you are welcome to make a reservation at n.doulos@artez.nl (closing date December 8, 2016).