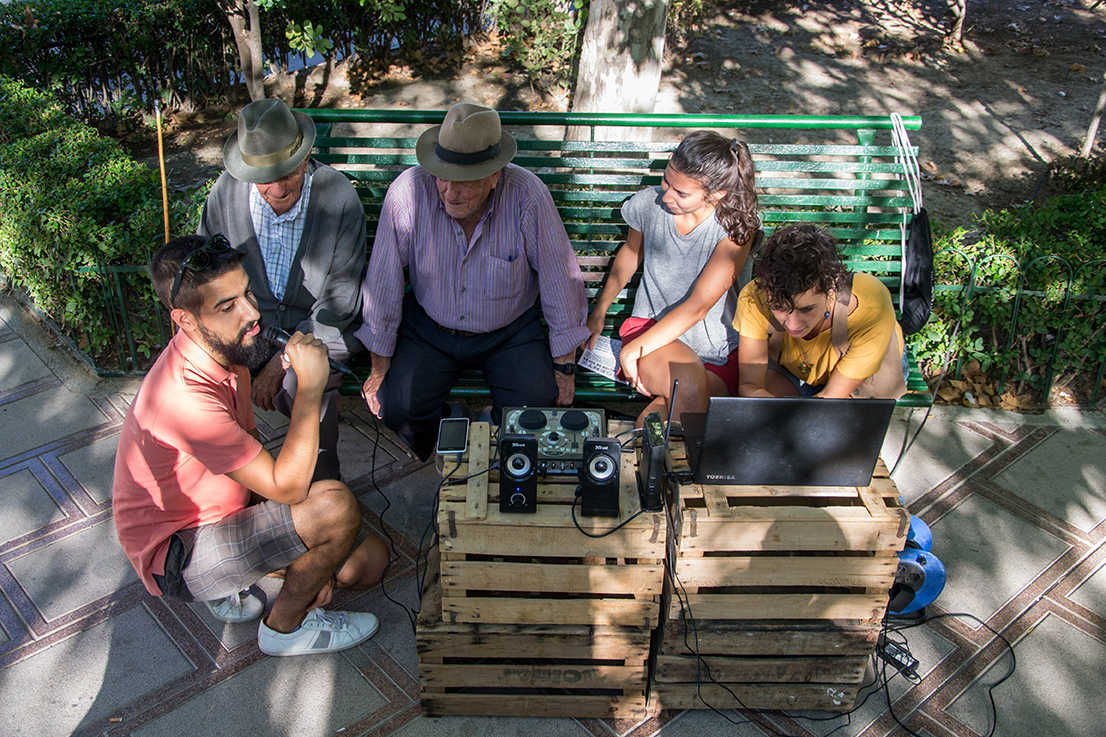 In the main square of the rural Spanish village of Valderrubio in Andalusia, three young artists are conducting an interview with Paco and Fransisco, two old farmers who live in the village. The conversation is broadcast as a daily, local radio program. Paco and Fransisco recount their memories about the surrounding landscape, the    meaning of specific places and the labor invested in it. It is not just a nostalgic going back in time, instead it tells of ecological struggles, political agency, and forms of subsistence. While the radio program is taking place, nine other artists are embroidering the map for the walk or doing print work. They are preparing for a march happening the day after, a walk of twenty-two kilometers from Valderrubio to the doors of Granada and back again. The fertile land around Granada, which used to be full of gardens and agriculture, has been taken over by developers. The Mobile Method participants will march in solidarity with farmers and activists who are active in defending these lands, while aligning with ecological struggles, using art as a tool for the commons.

After having organized five editions of Publishing Class (2010-2015), Casco moves to pastures that are literally greener, with the DAI curriculum INLAND Class. We extend and elaborate on last year’s collaboration with artist Fernando García-Dory, who is core tutor. Participants are invited to join INLAND, an artistic project and network operating in the fields of agriculture, ecology, and the commons, for the duration of one year, though can be involved in INLAND for as long as they choose. The coursework consists of a direct engagement with rural commoning practices and communities, thereby learning from INLAND’s practice, specifically its Mobile Method project.

With Mobile Method, artists and other cultural workers are provided space and time to undertake an intense period of collective study and co-production within one specific, local community in the countryside. The aim is to extend one’s knowledge, particular set of social skills, and develop discrete tools connected to cartography, printing, and radio, as well as the projects Mobile Museum, Portable Kitchen, and Peasant Theatre.

In the case of INLAND Class, each participant engages with a rural-related community where local commons are disputed or (in the process of being) enclosed (privatized). The participant’s engagement with this community will develop throughout the year leading to a work of art, be it a reading, a meeting, a performance, a sculpture, a research group, or a policy proposal. INLAND Class furthermore contains a theoretical component, articulated through an INLAND Reader that consists of relevant texts deriving from the field of agro-ecology, affect theory, post-humanism, new environmentalism, and peasant studies. This theoretical framework will be analyzed collectively through an irregularly held reading group and serve as the backdrop for presentations by guest tutors from the fields of art, ecology, policymaking, or (land) activism, as well as the INLAND Nederland extension agents and other INLAND collaborators from Spain, Turkey, or Italy (more info below). The artworks will be presented during the DAI week in June.

Since 2009, artist Fernando García-Dory has developed the socio-ecological project INLAND. INLAND brings an agro-ecological perspective to artistic and social practice, aligning itself with initiatives and groups that work towards an economically feasible, socially fair, and environmentally sustainable society that is based on the commons. INLAND aims to undo the current “metropole-centrism,” to discover and preserve knowledge of farmers and indigenous communities who live directly on and with the land, to deepen the understanding of ecological cycles, our place as humans as part of a universe of beings.

According to the artist, INLAND is a “para-institution”: more than a long-term art project, it is a lasting, holistic system and network that is developing its own form of governance, economy and organization. As a para-institution, INLAND operates between the rural and the urban, relates itself, intervenes into, and takes from other institutional entities, such as the European Union, a Spanish farming village, and art institutions like Casco.

The activities of INLAND are myriad and multiform: they include art commissions in the rural, an artist-in-residence program, training schemes, art school and university curriculums, publishing, exhibitions, exchanges with national and European policymakers, a Shepherd School, gatherings uniting nomadic peoples from all over the world as well as websites, meetings, and constant dialogues with other practitioners in the field of art and agriculture.

Fernando García-Dory’s has been Artist at Work at Casco since Fall 2014. As part of the first mini-exhibition of INLAND at Casco in Spring 2015, INLAND and Casco formed a team of “INLAND extension agents” in Utrecht, who have done research into ecofeminism, European agricultural policies and trade agreements like TTIP, alternative food systems, the history of land reclamation, landscape, and soil. Last year’s Publishing Class V: INLAND, a collaboration with DAI and Werkplaats Typografie, was also connected to INLAND, bringing forth a collective volume (to be published and launched in November 2015) with case studies from the Netherlands, Kurdistan, Greece, Iran, and Germany as well as ponderings about ecofeminism, Goethean science, flower auctions, fences, grafting, and more. Together with Casco, INLAND now aims to actively root itself in the Netherlands. From 2016 onwards, the INLAND Nederland extension agents will conduct field research, in relation to self-organized groups and farmers’ initiatives in the Dutch countryside.