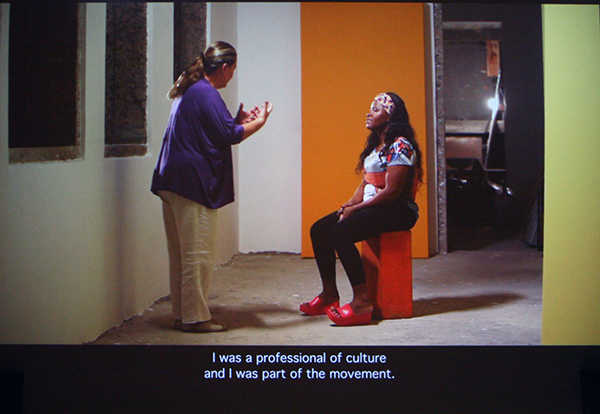 Bete and Deise to be presented at:

It is with great pleasure that If I Can’t Dance, I Don’t Want To Be Part Of Your Revolution announces the Brazilian tour of Wendelien van Oldenborgh’s film Bete & Deise (2012). We warmly invite audiences in São Paulo, Recife and Rio de Janeiro to attend the presentations at Casa do Povo, Fundaj, Capacete, MAM Rio, and Casa França-Brasil. The screenings will be accompanied by conversations with the artist and invited guests. Bete Mendes and Deise Tigrona, protagonists of the film, are special guests at the presentation in MAM Rio.

Bete & Deise stages an encounter between two women in a building under construction in Rio de Janeiro. Actress Bete Mendes and Baile funk singer Deise Tigrona have—each in their own way—given meaning to the idea of a public voice. Together these women talk about the use of their voice and their positions in the public sphere, allowing for the contradictions they each carry within themselves to surface. Through a montage that evocatively combines the voices of the women with their image, Van Oldenborgh confronts us with considerations on the relation between cultural production and politics and the potential power that is generated when public issues intersect with the personal.

Bete & Deise, produced as a commission for If I Can’t Dance’s Edition IV (2010–2012), was shot in Capacete’s new premises in Rio’s Gloria district four years ago. The film has since been presented at the International Film Festival in Rotterdam and at various institutions and festivals. This tour presents the premiere screenings of the work in Brazil.

The tour starts with a double bill presentation of Bete & Deise and Van Oldenborgh’s most recent film From Left to Night (2015) at Casa do Povo, organized in collaboration with P.A.C.A. It will be followed by a conversation between Frédérique Bergholtz, Max Hinderer, Wendelien van Oldenborgh, Amilcar Packer and Suely Rolnik.

In Recife Bete & Deise will be presented at Fundaj and accompanied by an after talk with the artist and Fundaj’s director Moacir dos Anjos.

At Capacete Van Oldenborgh will present other work developed in the context of Brazil. A workshop for the Capacete participants with If I Can’t Dance director Frédérique Bergholtz and curator Tanja Baudoin takes place in the afternoon.

In Rio the screening of Bete & Deise takes place at the Cinemateca of MAM in the presence of special guests Bete Mendes and Deise Tigrona. Following the screening they will engage in a conversation with Van Oldenborgh, and theorist Ana Paula da Silva (UFF).

At Casa França-Brasil the film will be screened for two subsequent weeks during the opening hours of the institution.

For visiting information please go to the institutions websites.

The presentation of Bete & Deise in Brazil is made possible with the financial support of the Mondriaan Fund. The tour is initiated and organised by If I Can’t Dance, and is co-produced with Capacete, Casa França-Brasil, Casa do Povo, Fundaj, and MAM Rio, with thanks to the Goethe-Institut São Paulo. The artist and If I Can't Dance would like to thank Manuela Moscoso, for her assistance in coordinating the tour, as well as Moacir dos Anjos (Fundaj), Pablo León de la Barra (Casa França-Brasil), Helmut Batista (Capacete), Patricia Broers (Consulado Geral do Reino dos Países Baixos no Rio de Janeiro), Luis Camillo Osorio and Marta Mestre (MAM Rio), Benjamin Seroussi and Mariana Lorenzi (Casa do Povo), and Max Hinderer, Amilcar Packer, and Suely Rolnik (P.A.C.A.).

Bete & Deise was commissioned by If I Can’t Dance, I Don’t Want To Be Part Of Your Revolution for Edition IV (2010–2012), and was financially supported by the Mondriaan Fund and Wilfried Lentz Gallery, Rotterdam, with thanks to Capacete.