2007 OUTSIDE ACADEMY: Be(com)ing Dutch: the Eindhoven Caucus at the Van Abbemuseum 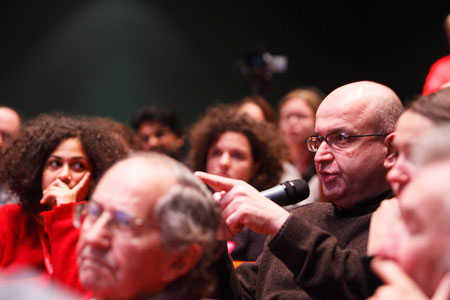 DAI delegates Teresa Maria Diaz Nerio and Rana Hamadeh will be residing at the Van Abbemuseum in Eindhoven, where a four week caucus is taking place as part of the museums project ‘Be(com)ing Dutch’. This two-year project was developed both inside and outside the Van Abbemuseum and consists of debates, reading groups, artist’s projects, exhibitions, residencies, and forms of collective participation and production.

The caucus takes place from November 9 till December 6. More information on Be(com)ing Dutch and the public programme of the caucus can be found on www.becomingdutch.com.

On November 9, 2007 the second phase of the award winning two year project Be[com]ing Dutch started in the Van Abbemuseum in Eindhoven. This successful gathering hosts over forty artists as well as more then sixty internationally renowned speakers that come to Eindhoven during four weeks to form the Eindhoven Caucus. They debate and discuss the questions about art and it's influence on national identity, and set up the conditions for the production of the Be[com]ing Dutch exhibition which will open in the Van Abbemuseum on 24 May 2008.

Eindhoven Caucus
The idea of a Caucus derives from a term from a Native American practice, a very pragmatic form of democracy where the community comes together to discuss the future. The Van Abbemuseum has chosen this concept as inspiration for the second stage of Be[com]ing Dutch because it indicates that the space of the museum is an active space for shared decision-making.

Participant Programme
During the Caucus, the forty artist-participants that gathered in Eindhoven from all over the world attend and develop a programme of lectures, participate in workshops and artists presentations, present their own work, exchange ideas and develop a creative collective and individual creative production at the Van Abbemuseum.

BE[COM]ING DUTCH
Be[com]ing Dutch is a two-year project developed both inside and outside the Van Abbemuseum, which consists of debates, reading groups, artists projects, exhibitions, artists in residence, and other forms of collective participation and production. Questions about cultural identity and normative 'national' values are becoming more and more an issue in political and cultural debate. Be[com]ing Dutch wonders whether art can provide alternative ways of contemplating contemporary society. Be[com]ing Dutch aims to examine our ideas concerning cultural identity and to investigate current processes of inclusion and exclusion.

In 2006 the Van Abbemuseum was announced as winner of the Development Prize for Cultural Diversity by the Mondriaan Foundation for their plan Be[com]ing Dutch. With support of the Culture Programme of the European Union and of Stichting Doen.