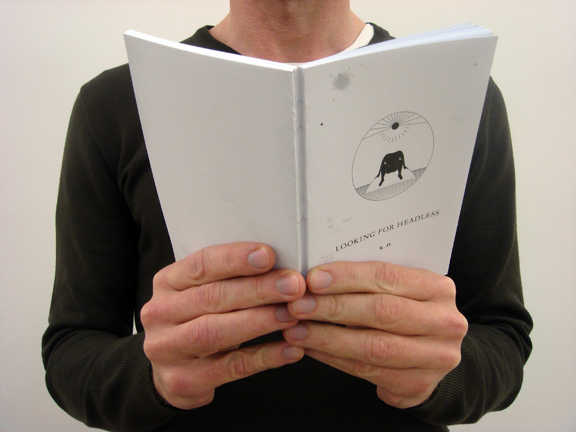 EFA Project Space announces The Book Lovers, a multi-disciplinary exhibition, series of events, and library, all rising out of the phenomenon of artist novels. The Book Lover's curators embarked on this project in order to create public awareness about the rising artistic trend of artists turning to the fiction novel as their medium.

Through an onsite collection of 140 novels written by artists and an installation of artworks in varied media that each link to select novels by their same artists, the curators of The Book Lovers invite us to think about literature as a tool for creating expanded narratives in the visual arts. They ask, what are new implications for the production process when adopting a purely textual form, moreover a narrative? When thinking about collective writing, fictional artists and authors, and ghostwriters, what issues are raised concerning authorship and the re-skilling of artistic practice?

The Book Lovers focuses not only on the artists' process of writing, but also on the act of reading as a required action. Visual artists who turn to the format of the novel seek protracted engagement with their audience. An artwork that takes the form of a novel is only complete once it has been read. Such work demands an investment of the viewer's time beyond what is typically expected of art, favoring reflection over fast consumption. The curators propose that these are public works that in book form, may be experienced in daily contexts, on the train, in bed, and so on -- becoming part of a 'lived' reality.

Activating the involvement of the audience/participants, Headless, by Swedish artist duo Goldin + Senneby, is a masterful example of interplay between lived experience and fiction. It is a detective novel published one chapter at a time. With each new chapter release, a public event--such as an interview or performance--takes place. These events are then incorporated into the next chapter. People attending the event become characters, and anything that transpires is free to be woven into the novel's next detective plot. UK-artist Tim Etchells's work Ways Out calls upon the viewer to activate the text. Exploring how to move about and later escape a city, Ways Out is a stack of printed instructions intended for visitors to take away and act out in life. The instructions play with linguistic ambiguities possibly aimed at practical patterns of behavior or existential changes.

Adopting a research-based, sociological approach, artist Jill Magid's 18 Spies is a grouping of descriptions on paper that result from the artist's work with the Dutch secret service (AIVD); a commission by the AIVD to "reveal the human face" of the organization. Magid met with 18 agents over three years all who volunteered for interviews while remaining anonymous. These interactions spawned a variety of works including the non-fiction novel, Becoming Tarden. Since then, the AIVD confiscated a number of the original descriptions. The work of NYC-based artist Julia Weist involves research and documentation of life in a sociological, even anthropological manner. Her novel Sexy Librarian, released in 2008, became the centerpiece of a further exploration of irrelevant intellectual material and unpopular love stories. The Sexy Librarian project addresses notions of failure and rejection while recovering discarded cultural debris that further conflate the artist's life experiences and writing to the extent that they become inextricably intertwined.

Fiction is a ripe space for artists to harness the concept of identity. Starting with the case of Justine Frank, Israeli artist Roee Rosen's alter ego. Frank, a Jewish-Belgian Surrealist artist and writer, was author of the novel Sweet Sweat--a blend of feminism, pornography, Judaism, and art--written in French in 1931. Rosen "rediscovered" this obscure artist and published her novel with an accompanying essay and biography. Additionally, she unearthed a whole body of Frank's artwork directly connected to the Sweet Sweat narrative text. UK-based artist Lindsay Seers hides behind the fictional author M. Anthony Penwill. Her work explores the fictional constructs on which memory and identity are built. It also reflects on the nature of images, specifically photography. In her novel It Has To Be This Way, the protagonist suffers amnesia, and uses old personal photographs, as one would use Tarot cards, to recover her memory and identity.

Some of these artists create visual work existing as pictorial translations of the concepts expressed in the text. The Marque of the Third Stripe, by Alexandre Singh, is both novel and multi-disciplinary project. The novel connects several chapters in a story-within-a-story structure. The corresponding video installation includes a translation into hieroglyphs as each word is read aloud, and repeats this Russian doll-like process by continuously zooming in, all along revealing new patterns within patterns. Tom Gidley's writing and visual practice inform each other and focus on how the memory operates. Gidley is about to publish his second novel, Peasouper, in which there is mention of masks, changing appearances, face-swapping, and identity shifting. In conversation with this text, Gidley created a series of ceramic pieces that address the notion of attributing human characteristics to abstract forms.

The artist novels collection is also on view at M HKA (Museum of Contemporary Art in Antwerp, Belgium--December 6, 2012 to April 21, 2013) and has been acquired by the museum into its collection.

This performance video screening is in connection with Goldin + Senneby's Headless. Space for the event is limited. Reservations will be required. Email projectspace@efany.org for information.

Woo Jung Cho is the director of The Dream of the Audience, a film about Theresa Hak Kyung Cha, the NYC- based artist and author of the novel Dictée who met a tragic early death. Someclips of the film will be shown.

This public reading performance is based on Keren Cytter's novel The Seven Most Exciting Hours of Mr. Trier's Life in Twenty-four Chapters. The novel will be read aloud by actors, coinciding on the hour by reading each of the twenty-four chapters of the novel.

The Book Lovers's artist Jill Magid will give a radio reading performance. More information will be available at a later date.

David Maroto (1976) is a Spanish artist based in The Netherlands. His wide-ranging practice has led him to exhibit his work on psychoanalysis at the Freud Dreams Museum in St Petersburg, whereas his 8-year project to create a board game lead to the inclusion of his Disillusion at the Internationale Spieltage in 2006 (Essen, Germany) and other game fairs worldwide. In 2011 he spent a six-month residency in ISCP New York.

His work has been shown internationally in solo and group exhibitions: S.M.A.K. (Ghent), Extra City (Antwerp) Sign exhibition space (Groningen), ECAT (Toledo, Spain), Tina B Festival (Prague), TENT. (Rotterdam), W139 (Amsterdam). In 2012 he took part of 11th Havana Biennial and carried out a solo project in Artium (Museum of Contemporary Art, Vitoria, Spain) called Illusion-Disillusion. Currently, he is enrolled in the MFA program of Dutch Art Institute. His art project in the form of a novel, Illusion, inspired The Book Lovers, a project on artist novels in collaboration with curator Joanna Zielinska.

Joanna Zielińska is an art historian, writer and curator. In 2010, she started a collaboration with the Centre for the Documentation of the Art of Tadeusz Kantor - Cricoteka in Kraków. Zielinska is the former Chief Curator at the Znaki Czasu Centre of Contemporary Art (CoCA) in Toruń, Poland, where she curated the inaugural exhibition and the institution's program from 2008-2010. From 2003 to 2007, Zielinska worked with the curatorial collective Exgirls. In 2010 - 2011 she was in residence at International Studio and Curatorial Program (ISCP) in New York. Her interests range from syllogomania, collecting and various aspects of escapism.