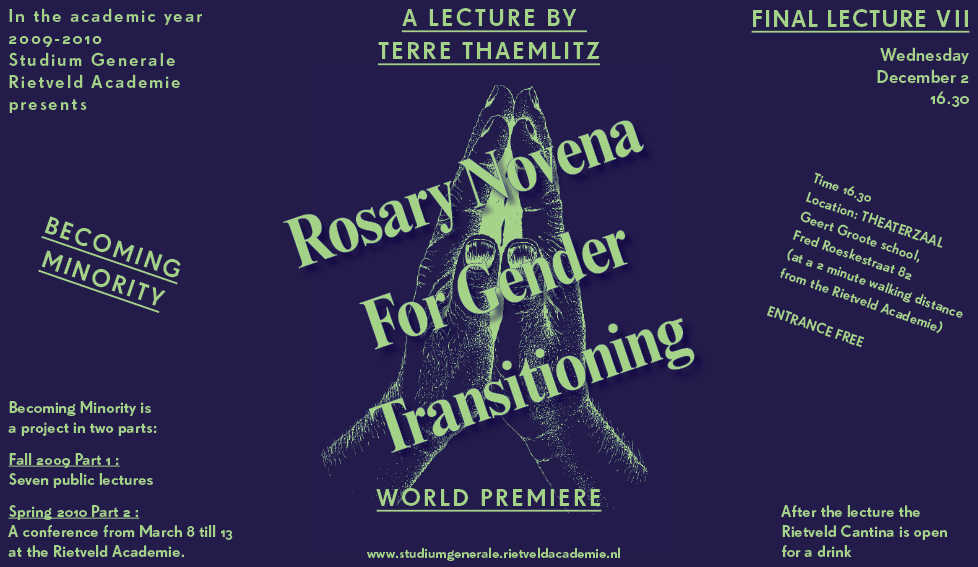 In 2009-2010 Studium Generale Rietveld Academie appropriates 'Becoming Minor' a complex notion coined by French philosopher Gilles Deleuze and his friend Felix Guattari, activist, psycho-therapist and social philosopher, and will take it on board slightly simplified, as 'Becoming Minority'.

Still very much in line with Deleuze 's and Guattari's initial concept Studium Generale proposes 'Becoming Minority' as one of the becomings one is affected by when avoiding 'becoming fascist'. As an upbeat to the Conference BECOMING MINORITY that will take place at the Rietveld Academie from March 8 - March 12, 2010, we now present you with a series of 7 exciting lectures that will introduce you to the notion of Becoming Minority.

Introduction to the lecture:
In this lecture, Thaemlitz presents the world premiere of a new audo/video work, "Rosary Novena for Gender Transitioning," from the forthcoming album Soulnessless (release date undetermined). In an era which insists upon judging audio in relation to "authenticity" and "soul," Soulnessless critically dissects intersections of gender, spirituality, and commercial audio production. Within this theme, "Rosary" questions the fusion of ideology and industry behind sexual reassignment surgery (SRS).
Recalling experiences leading to her own anti-spiritualism and non-essentialist transgenderism, Thaemlitz draws parallels between spiritual deprogramming and gender deprogramming, only to have the essentialisms underlying SRS result in a new cult of gender identity. In what ways can SRS, as a radical rejection of gender that ironically results in a "pathologically-religious" reconciliation with dominant gender models (via mandatory diagnoses of Gender Identity Disorder, etc.), elucidate the gap between what Deleuze and Guattari referred to as "becoming-minor" and the identitarian concept of "becoming-minority?"
By looking at SRS, Thaemlitz rejects both of these terms, arguing that any "becoming-" is inseparable from processes of homogenization, and therefore inextricably linked to "becoming-fascist." Uninterested in the dichotomy of "relative deterritorialization and reterritorialization," which always bears the undercurrents of a positivist alliance with power (real or desired), as well as the all-encompassing overtures of "absolute deterritorialization," Thaemlitz discusses her own attempts at "overterritorialization" through confusing, hypocritical, and contradictory social identities and non-cooperative alliances. The object of overterritorialization is not a realignment of power, but a more immediate (and occasionally destructive) process of causing power dysfunctions in one's own life and the lives of others, sporadically complicating power relations to a point of self-canceling impotence. Hope, as the manifestation of a desire for power, is irrelevant.

About Terre Thaemlitz.
Terre Thaemlitz is an award winning multi-media producer, writer, public speaker, educator, audio remixer, DJ and owner of the Comatonse Recordings record label. Her work combines a critical look at identity politics - including gender, sexuality, class, linguistics, ethnicity and race - with an ongoing analysis of the socio-economics of commercial media production. He has released over 15 solo albums, as well as numerous 12-inch singles and video works. Her writings on music and culture have been published internationally in a number of books, academic journals and magazines. As a speaker and educator on issues of non-essentialist Transgenderism and Queerness, Thaemlitz has participated in panel discussions throughout Europe and Japan. He currently resides in Kawasaki, Japan. www.comatonse.com