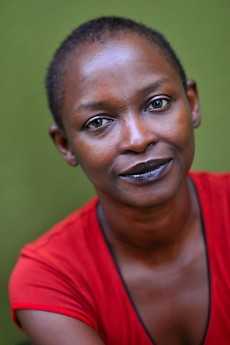 Koyo Kouoh is a Cameroonian-born, independent exhibition maker and cultural producer, educated in banking administration and cultural management in Switzerland and France. She is the founder and artistic director of Raw Material Company, a center for art, knowledge and society.

Kouoh is currently serving as an agent to Carolyn Christov-Barkagiev for Documenta 13. She was the coordinator of cultural programs at the Gorée Institute from 1998 to 2002, collaborated with the Dakar Biennale of Art from 2000 to 2004 and co-curated Les Rencontres de la Photographie Africaine in Bamako in 2001 and 2003. Specializing in photography, video, and art in the public space, she has curated numerous exhibitions in Brazil, Switzerland, Austria, Germany, the United States and Scandinavia, and has written on contemporary African art. Kouoh also served as curatorial advisor to the artistic director for Documenta 12 and curated Philip Aguirre's project Gaal Gui for the Beaufort Triennale 03. Her latest exhibition Hypocrisy: The Site Specificity of Morality, co-curated with Stina Hoegkvist, was on view at the Museum of Contemporary Art in Oslo. In collaboration with Anne-Marie Bouttiaux and David Adjaye, Kouoh curated the contemporary section of GEO-graphics, an exhibition that celebrated 50 years of African Independence, at Palais des Beaux Arts in Brussels.

Recent projects include "Body Talk: Feminism, Sexuality and the Body in the work of six African women artists", WIELS, Lunds Konsthall, 49N6E FRAC Lorraine (2015–16); "Precarious Imaging: Visibility surrounding African Queerness", RAW Material Company (2014). In collaboration with Rasha Salti, Kouoh is currently working on "Saving Bruce Lee: African and Arab Cinema in the Era of Soviet Cultural Diplomacy", a three-year research, exhibition and publication project to be held at Garage Museum of Contemporary Art in Moscow in June 2015 and September 2016. She lives and works in Dakar and Basel.