The stage is never a neutral space, it is not an innocent ground of representation and entertainment. When sexuality, gender, or race enter the stage, the political and the personal meet with far-reaching implications. After all, who is being represented and how? By whom? And for what audience? ~ An Amsterdam School for Cultural Analysis (ASCA) workshop organized by Shekoufeh Behbehani, Martina Flores Mendeville, and Alvaro Lopez scheduled for June 1- 3, 2022. This is a CALL FOR CONTRIBUTIONS: especially looking for perspectives on violence, representation, embodiment, and/or sexuality from artistic and activist perspectives. Deadline: 10 March. 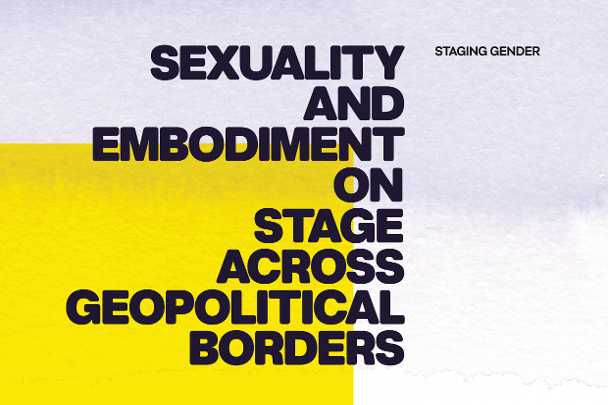 Two decades ago, José Esteban Muñoz (1999) argued for a personal/political staging that moves beyond mere oppositions. With the notion of disidentification, Muñoz addressed forms of staging and performing that cannot be collapsed into simplistic understandings of oppression and resistance. Muñoz’s work hinted at the increasing multiplication of staged bodies, of staged understandings of sexuality and race that in the last decades have depoliticized and commodified once radical forms of entering the stage. But what does it mean to put these sociocultural markers on stage nowadays? How have the political and personal changed positions in the last twenty years? Moreover, how can the stage itself, from that of a play or a film to that of a smartphone or the street, affect that which is being staged? After all, to speak of bodies, of sexuality, and violence from a stage and to an audience from the Netherlands, Iran, or Argentina entails different ways of relating to and interacting with the world. How do the personal and the political change in the movement across these contexts? And how is that which is represented transformed, misunderstood, and/or reconceptualized?
All these questions aim to open a critical reflection and dialogue on the personal/political role of the stage; they intend to reflect on the ways that the stage (re)shapes gender, sexuality, and race across geopolitical borders in the contemporary moment. We want to rethink what the
stage is according to its location, as well as its implications for the way in which we understand the world. We call for a dialogue that problematizes simplistic understandings of similation and resistance; we want to move beyond taking a film, or a play, or a street performance as either revolutionary or oppressive. In short, just like Muñoz, we aim at addressing the multiplicity of bodily, political, and social implications of the stage when it gets caught in the asymmetries binding different sociopolitical contexts.

Eliza Steinbock – Associate Professor of Gender and Diversity Studies at Maastricht University. They are author of the award-winning book Shimmering Images: Trans Cinema, Embodiment, and the Aesthetics of Change (Duke, 2019), and co-editor of Art and Activism in the Age of Systemic Crisis: Aesthetic Resilience (Routledge, 2020). Currently Eliza is project leader of “The Critical Visitor” consortium, developing intersectional approaches for
inclusive heritage (NWO 2020-2025). Together with Susan Stryker and Jian Neo Chen, Eliza co-edits the new Duke book series for critical trans studies, ASTERISK.

Tina Gharavi – Born in Tehran, Gharavi is the swiss-army-knife of director-writershowrunner- producers focused on delivering authentic stories lensed with an impeccably
wrought perspective. Having worked in war zones and in guerrilla filmmaking, Gharavi marries her indomitable spirit with a distinct talent to deliver performances and manage beautifully observed stories. Her debut feature, I Am Nasrine, was nominated for a BAFTA, she has recently completed principle photography on her second feature, A Beirut Love Story. Her next film, a feature documentary, Tribalism is Killing Us resulted from visiting Angola State Prison, a film about difference and othering is due out in 2021 and she’s a showrunner, engaged on developing her
first TV series, Refurinn/The Fox, an Icelandic/British detective noir with an intriguing twist. Gharavi is also an academic, teaching filmmaking around the world, and was awarded an MIT Fellowship. She was elected into the BAFTA Academy in 2017, is represented by Independent Talent in the UK and Gersh in Los Angeles, her two home bases.

Buhlebezwe Siwani  ­– Visual and performance artist. Buhlebezwe Siwani was raised in Johannesburg,  due  to  the  nomadic  nature  of  her  upbringing  she  has also  lived  in  the  Eastern  Cape  and  KwaZulu  Natal.  Siwani works predominantly in the medium of performance and installations, she includes photographic stills and videos of some performances. She uses the videos and the stills as a stand in for her body, which is physically absent from the space. Siwani completed her BAFA (Hons) at the Wits School of Arts in Johannesburg in 2011 and her MFA at the Michealis School of Fine Arts in 2015. She has exhibited at the Michaelis Galleries in Cape Town, a site-specific exhibition in collaboration with APEX Art, New York City, in 13th Avenue, Alexandra township, Commune 1, and Stevenson in Cape Town. She is represented in the in multiple private collections and institutional collections around the world. She lives and works between Amsterdam and Cape Town.

On this academic year, the ASCA Workshop will take place in person in Amsterdam on the 1st, 2nd, and 3rd of June.
Staging Gender will engage its participants in a critical blend of academic, artistic, and activist events aimed at blurring epistemological and cultural boundaries—from theoretical stances on performance to embodied stage violence, from lived experience and activism to discursive tensions across (political/disciplinary/social) borders.

For more information, you can also check the website of the workshop: https://staginggender2022.wordpress.com/

CALL FOR CONTRIBUTIONS: Please submit a 300-word abstract and short bio by March 10 to staging.gender2022@gmail.com

- Beyond Representation and Opacity in times of Hypervisibility: Reflections on and engagements with compulsory staging/visibility for/from a Western perspective of differing racialized experiences, embodiments, and sexualities.
- Contextual Tensions on Stage: Approaches to the differences and commonalities that stages, and staging enact, assimilate, and/or subvert across different geopolitical settings.
- Trans Representations on Stage: Critical reflections on how gendered bodies and bodies in ‘transition’ are represented on stage and through different media.
- Performance and Violence: Critical engagements  addressing the crossings of performance, violence, race, gender, and sexuality.