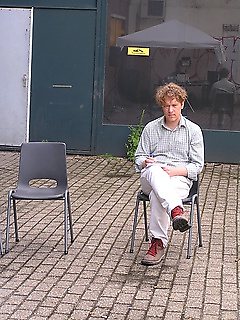 The Tate Gallery describes Phil Collins’ (Rucorn,UK, 1970) work as "engaging photographic and video installations involving diverse social groups. Acting as a catalyst, he encourages people to reveal their individuality, making the personal public with sensitivity and generosity." For the 2006 Frieze Show in London, a £33-million art fair, Collins created a fully-functioning 'Shady Lane Productions' office and did 9am-5pm office work in it for the duration of the show, with the room open to passing visitors. The office workers are said to be making Return Of The Real, a documentary about people whose lives have been ruined by reality TV.

Turner Prize judge Andrew Renton said, 'To call Phil Collins a prankster would be to underestimate the seriousness of his work. His work is clearly political and connected to social engagement.' His best known work is They Shoot Horses (2004) consisting of two videos each lasting seven hours and shown at the same time on different walls. This is a record of a disco dance marathon staged by the artist with nine Palestinians in Ramallah. Music from the last three decades is played and the young people are captured in a single camera take, as they dance or, at times, stand round or slump to the floor.