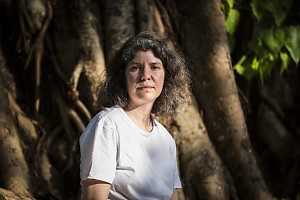 POSSIBILITIES FOR A NON-ALIENATED LIFE

“I remember Guy Debord’s warnings of a world mediated primarily through images — a society of the spectacle — as I write this note. That such a society is fascism’s main ally, we are all discovering in different parts of the world today.

Virtual hyper-connectivity has paradoxically alienated us from the warm solidarities of community; that place of embrace where we can enjoy our intelligence and beauty with others, where we can love; a place where we don’t need the ‘other’ as an enemy to feel connected.

At the heart of my curatorial adventure lies a desire for liberation and comradeship (away from the master and slave model) where the possibilities for a non-alienated life could spill into a ‘politics of friendship.’ Where pleasure and pedagogy could sit together and share a drink, and where we could dance and sing and celebrate a dream together.

Yet, how can one perform a biennale in a location where the biennale itself has become the sole pedagogic window into the art of the world? In a context that is so particular, as Kerala is, what could be a model, that would allow for self-determination for the audience?

‘Possibilities for a Non-Alienated Life’ is therefore conceived in two parts: The exhibition, constructed as a symphony of ideas — synchronous as well as diachronous, with affect and matter of factness — as well as a discursive, performative, architectural space called the Pavillion where everyone potentially can be a curator. The Pavillion can be a space where there would be no hierarchies of who could speak and what could be said and in which language; the joy of listening, speaking — agreeing and disagreeing — and working through differences, contradictions and confusions together with visitors; a perfect site for pleasure and pedagogy. The ethics of ceding authority as a curator in this space can result in the eros of sharing.

Imagine those pushed to the margins of dominant narratives speaking: not as victims, but as futurisms’ cunning and sentient sentinels. And before speaking, listening to the stone and the flowers; to older women and wise men; to the queer community; to critical voices in the mainstream; to the whispers and warnings of nature.

If we desire a better life on this earth — our unique and beautiful planet — we must in all humility start to reject an existence in the service of capital. Possibilities for a Non-Alienated Life asks and searches for questions in the hope of dialogue.”

Rana Hamadeh is a visual and performance artist from Lebanon based in The Netherlands. Drawing on a curatorial approach within her artistic practice, she develops longstanding discursive projects that think through the infrastructures of justice, militarism, histories of sanitation and theatre. Her work stems from an extended investigation into specific concepts and terms, treating the field of theory as fiction. In 2011, she initiated her ongoing project, Alien Encounters, which has since been operating as an incubator for a growing series of propositions that aim at complicating the notion of ‘alienness’. Previous solo exhibitions include The Institute of Modern Art (Brisbane, 2016); The Showroom (London, 2016); Nottingham Contemporary (2015); Western Front (Vancouver, 2015); Gallery TPW (Tonoto, 2015) and Kiosk (Ghent, 2014). Group exhibitions include a.o. The Moscow Biennial (2015), The New Museum (New York., 2014); e-flux (New York., 2014), The 8th Liverpool Biennial (2014), Wattis Institute (2014), The Lisson Gallery (2013), Beirut (2013), Witte de With (2013) and the Van Abbemuseum (2008/2011). She graduated with an MFA from the Dutch Art Institute in 2009.