The writing is on the wall for the Concertgebouw and Shell: Fossil Free Culture NL calls for a Fossil Free Museumplein. 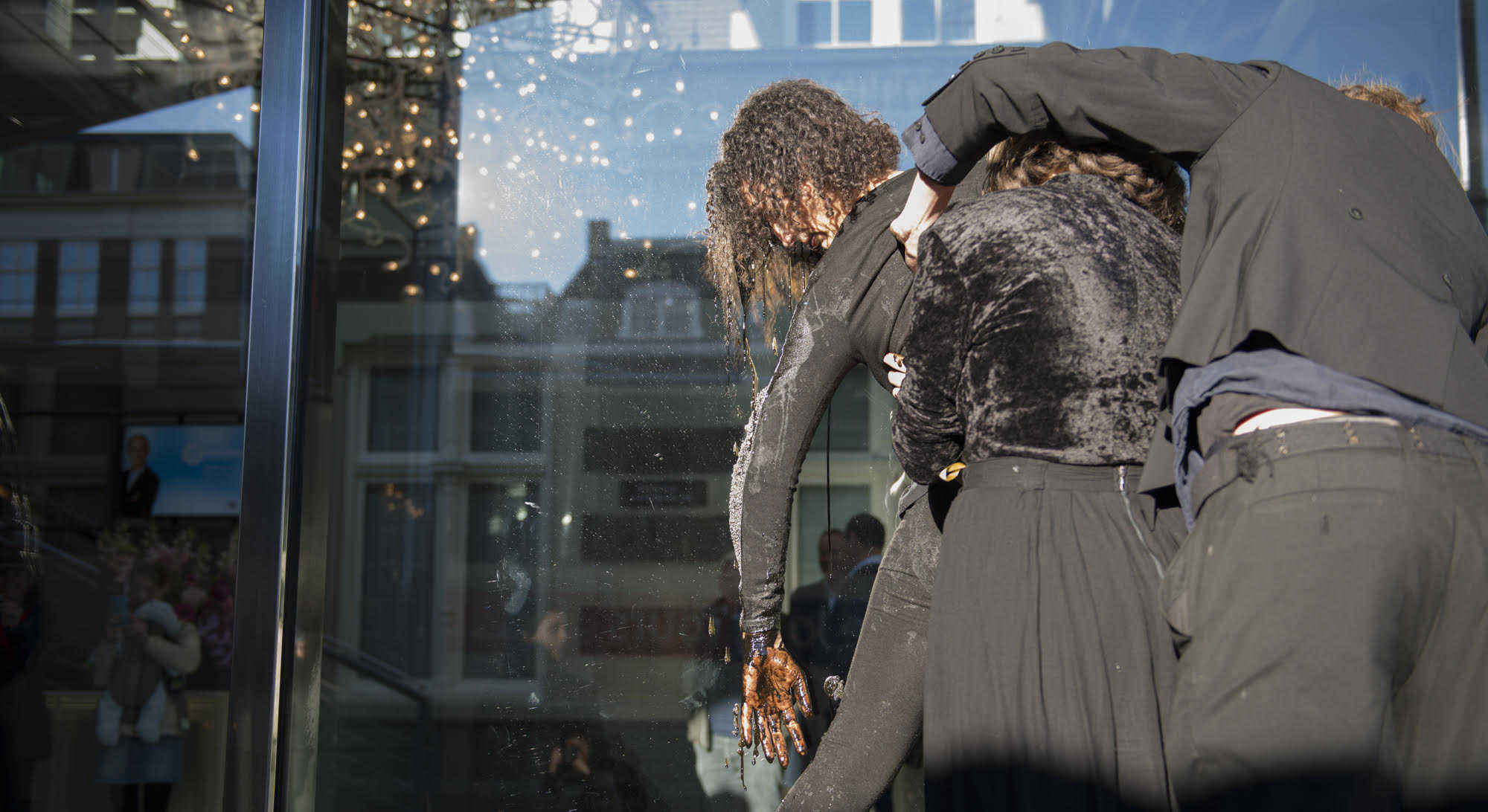 Amsterdam, January 20, 2019 – Following their successful campaign to get the Van Gogh Museum to end its 18-year sponsorship deal with oil and gas company Shell last year, today artists from Fossil Free Culture NL staged their first performance of 2019 to launch their new project demanding a Fossil Free Museumplein, Amsterdam. The group printed oil-drenched human bodies onto the glass façade of the Concertgebouw, exposing the true nature of the inappropriate relationship between the cultural institution and Royal Dutch Shell.

At around 12:00, fifteen performers from Fossil Free Culture NL calmly took their stage in front of the glass façade of the Concertgebouw. Slowly, three oil-drenched bodies emerged and were gently pressed against the glass. The oily body prints left behind after the performance ended, reminded of the twisted bodies depicted in Francis Bacon’s triptychs.

Maria Rietbergen of Fossil Free Culture NL says: “The is the meeting point for the political and financial elites that rule the Netherlands. Shell lobbyists want to rub shoulders with these elites to normalise their destructive global business practices. Not only in the institution’s business club, but in their boardroom as well. The Concertgebouw is now the last cultural institution on Amsterdam’s Museumplein still accepting sponsorship from the fossil fuel industry. We call for a Fossil Free Museumplein: Concertgebouw, drop Shell!”

The oily body prints refer to the women, men and children across the globe forced, often with their bare hands, to clean up the mess Shell leaves behind. For instance the numerous oil spills in the Niger delta. This unhealthy endeavour usually takes place out of the sight and mind of the majority of the Dutch. Fossil Free Culture NL hits home by placing that particular stain on national culture where it belongs: on Shell’s clubhouse, the Royal Concertgebouw.

The title of the performance, Writing on the Wall, signals that time is up for fossil fuel sponsorship of our cultural heritage.

“The Rijksmuseum rid itself of oilgiant Saudi Aramco in 2017. The Van Gogh Museum followed suit and dropped Shell as their sponsor in 2018. It is now time for the Concertgebouw to immediately cut their ties with the catastrophic fossil fuel industry. Shell is one of the biggest polluters that have knowingly pushed our climate to the brink of collapse. There is no place for Shell in the arts,” says Maria Rietbergen.

Fossil Free Culture NL is a collective of artists, activists, researchers and critics working at the intersection of art and climate activism. Our goal is to confront oil and gas sponsorship of public cultural institutions in the Netherlands. We are committed to terminally eroding the fossil fuel industry’s social legitimacy and their resultant license to operate. We are part of an international movement that works to liberate cultural institutions from fossil fuels. We collaborate with groups in the UK, like BP or not BP? and Culture Unstained; France, Libérons le Louvre; Norway, Stopp oljesponsing av Norsk Kulturliv; USA, Occupy Museums and The Natural History Museum, among others.

Coverage of the Van Gogh Museum dropping Shell as a partner (selection):