OPEN CALL for participants in a performance/play by Zachary Formwalt for DAI's Roaming Assembly#11 on Sunday February 12 ~ REHEARSALS: Jan 14 & Feb 11 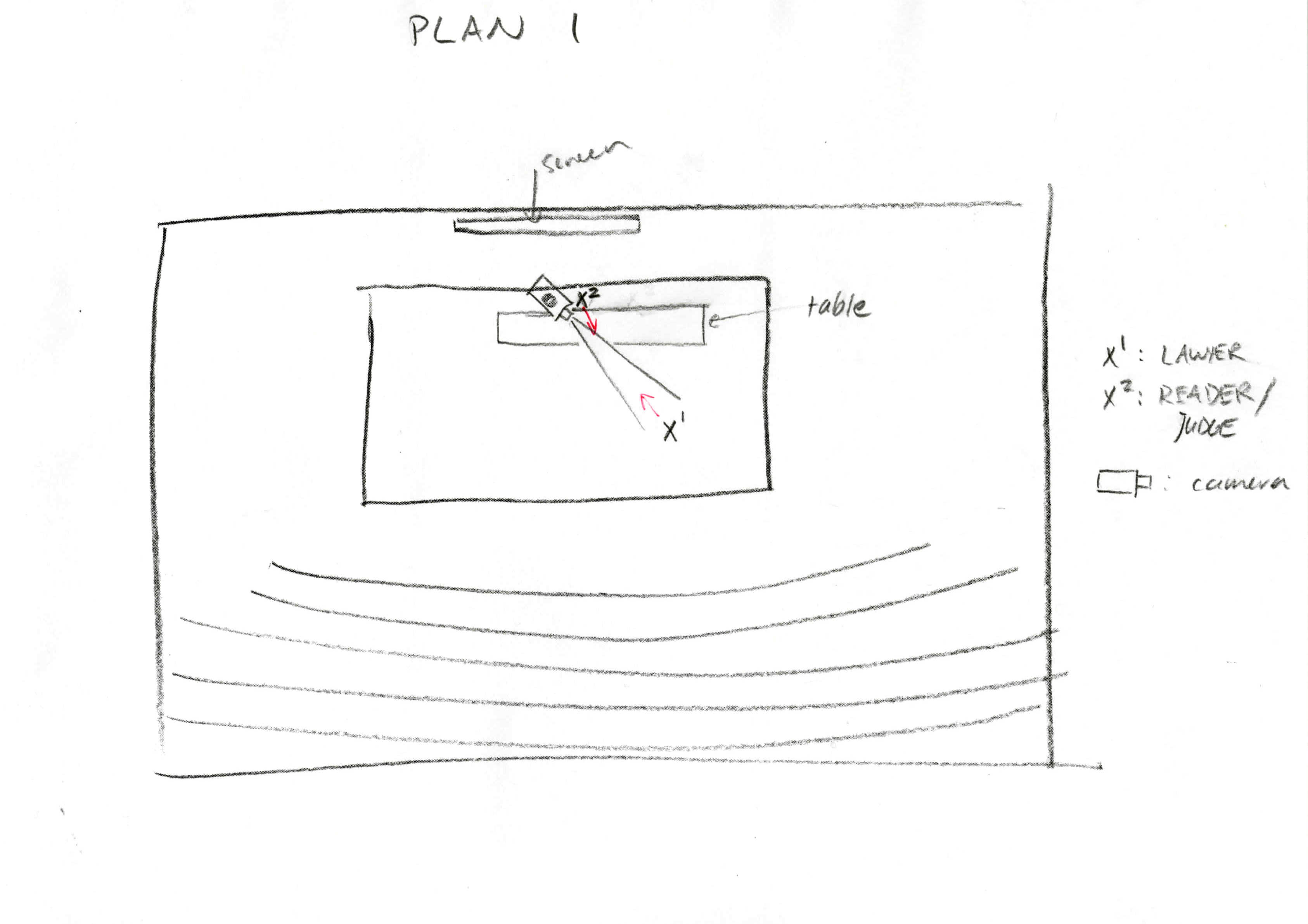 Welcome to participate: DAI-students (participation will not exclude students from face2face & coach sessions on both Saturdays)

& DAI-alumni (participating alumni are welcome to join lunches and dinners on Jan 14 and Feb 11 & 12 for free. DAI can furthermore offer you an overnight stay at the Stayokay on Saturday February 11. Refund of travel costs to and from Arnhem can be taken in consideration. Interested ? Please let us know - we love to see you in Arnhem).

ROAMING ASSEMBLY# 11 is curated by Sven Lütticken. Sven invited the artist Zachary Formwalt to present a project loosely based on a play by Ayn Rand, The Night of January 16, but it has been altered so that the trial in the play is now about corporate personhood, and it will be staged as a film shoot rather than as a complete play.

Here’s a description from Zachary:

"The working structure of the plot at this point is this: we are shooting a series of scenes in which individuals are delivering court testimonies as parts of scenes in a film. So. there’s the actors delivering the testimonies, a cameraperson shooting these speeches, and a director (which I’ll play).

At the moment, I am writing a section dealing with this 1882 Supreme Court Case in which one of the authors of the 14th Amendment to the US Constitution deliberately misquotes the journal that was kept during the committee meetings when the amendment was drafted to produce evidence of an early intention of the authors to extend equal legal protections to corporations alongside African Americans. So in this case there’s the lawyer/author, Roscoe Conkling, reading parts of his argument (directed by the director) and there is a kind of respondent/interlocutor who is posing questions about this testimony/argument of his. Ultimately they get to the problem of the one word he changed and there is an extended exchange about this in which he explains why he did this and the interlocutor presents and questions him about some of the historical consequences. Most of this is done through quotation of books written in the late 1920s through the 1930s, when the fact that Conkling had misquoted the journal, is first discovered. This is also the period in which Rand is working on her play, Night of January 16th, and when it is first staged on Broadway.

Once corporations were granted the rights of due process in relation to the seizure of property via their consideration as persons with the protections of the 14th Amendment, any little (or big) attempt by the government to regulate their activities could be subject to judicial review in the courts and once precedence had been set there, this review consistently determined such regulations to either be a seizure of property (reducing the expected earnings) without due process, or a violation of the right to contract in cases of minimum wage laws.

Rand’s ideal man, who acts only out of self-interest is a kind of psychologizing or making-human of the corporate person: casting a natural person in the role of an artificial one. In this sense it is significant that her first attempt at this, in Night of January 16th, is carried out, imperfectly she acknowledges in retrospect, through the figure of Ivar Kreuger, someone that is himself too directly caught up in the establishment of various corporate personalities to directly embody them. (And he is, significantly, only present in the play through the testimony of others.) Her first successful figure, in her opinion, would come some years later, with The Fountainhead, in the figure of an architect rather than a businessman/financier. What better a figure to embody the corporate person, especially since the architecture which she most admired, skyscrapers like the Empire State Building, were literally designed by corporations rather than individual architects, with the chief design decisions being made first and foremost according to real estate calculations about rent in relation to various zoning regulations. Probably the building type, at that point, least capable of testifying to the creative accomplishments of the self-confident, self-determining and self-interested person, unless of course the person you are talking about is indeed a (real estate) corporation.

On the other hand, Night of January 16th is a play that is still often put on by high schools in the United States (and interestingly enough it, was also put on quite often during the WPA’s Federal Theatre Project in the 1930s, but that’s a whole other story). It’s one of these high school courtroom dramas where the idea of the court system and how a trial unfolds is cast. And of course this comes with a heavy dose of Rand’s virtue of the individual vs the collective lesson. So there’s all the problems with her crude ideology there, but more subtle perhaps is this notion of the courts as a place that people have equal access to, where justice is blind, and where historical circumstances are suspended. It’s where timeless values appear and are tested. And this was of course part of Rand’s decision to use it as a forum for the presentation of “the virtue of selfishness,” to quote another one of her zinger titles (this one from a book of essays of hers published in the 1960s).
So there is something about rethinking this format of the courtroom drama. This is partially the reason to displace it from a jury trial to the higher courts—the appeals courts and ultimately Supreme Court. Here what goes on trial is indeed the way in which the lower courts may or may not have miscarried justice, and through this the judiciary also weighs in on the ways in which the legislature may have violated the constitution. And this latter role reveals the underlying ideology of the courts as a neutral space in which objective decisions are made about political acts, as if the judges serving on the Supreme Court could achieve some kind of objective view on the ultimate truth of the constitution, which allows them to then see the legislative violations of it by the politically partisan legislature. In this sense they determine the space in which political action can be taken by the legislature. They set the ultimate boundaries.

So, I’m thinking of this as a kind of counter-play to Rand’s, rather than an adaptation. Her play was successful on Broadway, but its real legacy turned out to be in amateur and school theatre, where her form of didacticism is more at home. (She hated that this happened to it!) So this thing that I am working on is more in the Lehrstück vein. I’ve got to finish with the 1882 section and see if there’s even space for another kind of episode, because that one is developing nicely now I think. I feel like it gets to a number of things and it is particularly suited to this format of acting and rehearsal—how to say one’s lines correctly—because here it is intonation and ultimately a single word substitution, from “person” to “citizen,” that realized a practical reconception of the subject in law.

The presence of the cameraperson and director is first and foremost a Brechtian device in the live play. There were several things I thought it could do. One had to do with the fragmentary nature of the production, so that there would be a real reason given for the excerpted form of the material read by the actors. The readings could be seen as screen tests for this film that may or may not end up being made. This would also allow for certain texts to be read by several different actors in an attempt to achieve the right voice and intonation, but without having to overly instruct in that regard. The need to produce the appearance of a single trial, or a series of trials through which a juridical concept was developed and challenged, would be lessened. Practically, this is important because of time and resource constraints, but there is also something useful in being able to pare away so much of the excess verbal and visual information that would be necessary to stage a convincing trial.

So, the cameraperson, director, film shoot setup is like an apparatus for cutting out these utterances made in the court in various different moments. And the theater space in which this is unfolding is where they are then immediately put together. In relation to this latter moment of putting these utterances back together, there will be a tendency to break out of that film shoot setup at certain points through a kind of nesting of quotes within the screen test script.

The other detail here to point out is that the cameraperson’s signal will get fed to the projector so that the theater audience can see the screen test testimony as it is being shot. If they appear in it themselves, it will be simply as a blurred background audience, which is pretty much all the set that is needed for these witness/lawyer court testimonies.

So finally, the question of gender. It’s true that all these 19th century court figures are men. But part of the cutting out process is the separation of the texts from that context. These are readers as much as they are actors and I think it wouldn’t be a problem with an entirely female cast (that would be a great V-effect!). Though I don’t want to exclude male students, so I guess we should have it mixed.

The use of the camera material: maybe it gets used later, maybe not. I’m not really sure. I suppose we could discuss it with the students and see how they feel about it."