2006 - 2008 Nikos Doulos: “In order to produce a counter narrative, we have to try to map the city’s narrative and link it to related global narratives.” 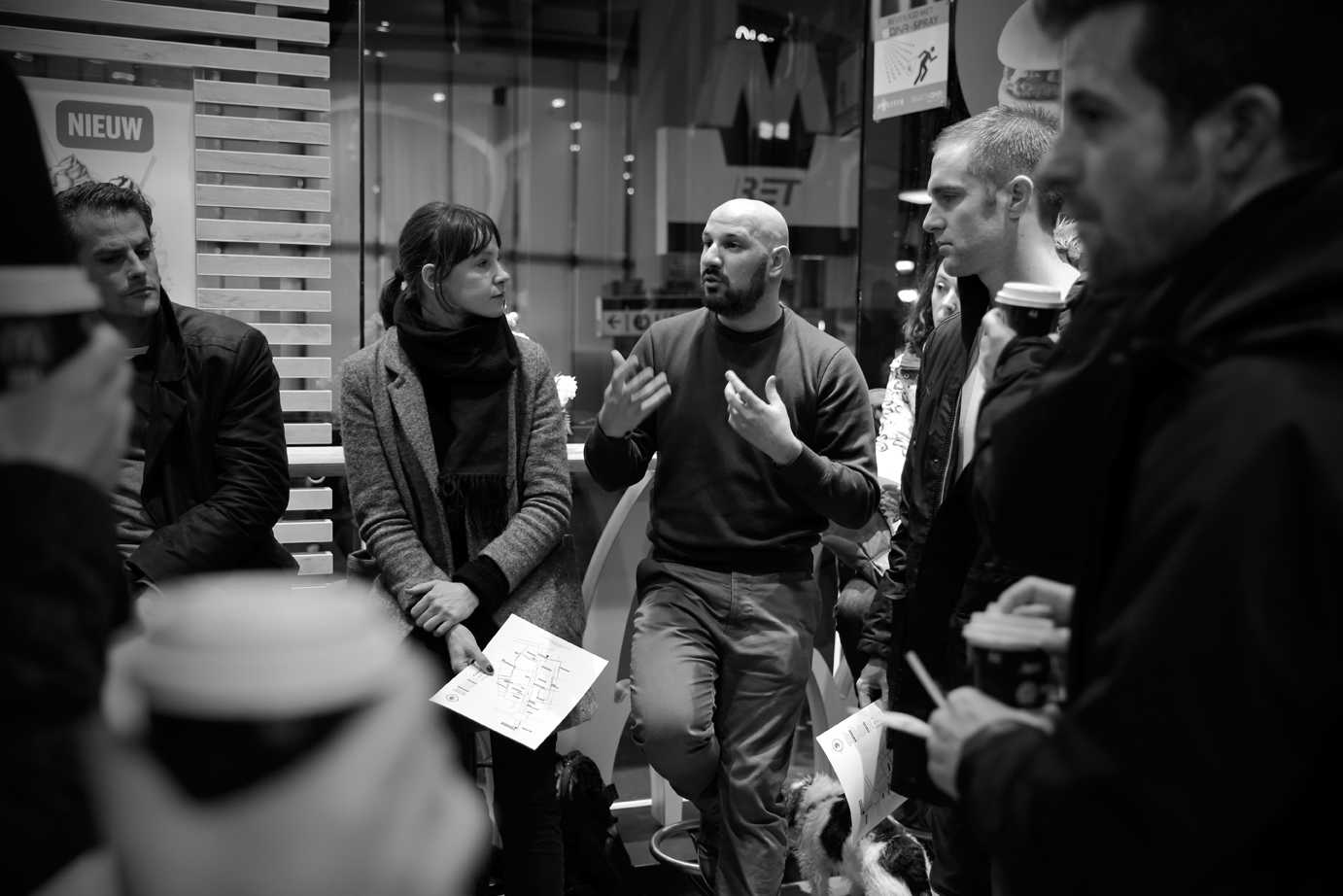 (Nikos Doulos at the centre of the image)

In 2008, when Nikos Doulos graduated from DAI, the world was just beginning to see the shockwaves from the financial crisis of that year. It seems natural that his practice has since taken a decisive shift from purely collaborative artwork towards artistic coordination, with a special interest in inclusive modes of knowledge production. For Nikos, initiating and developing artists’ networks goes hand in hand with the discursive practices and temporal interventions that can generate new forms of knowledge. Taking the local Greek context (his own), and Athens in particular as a point of departure, he has made his interest in urban spaces and transformation a significant part of his research, especially when it comes to the project which may be closest to his heart, Nightwalkers.

To give a little more background: In 2011 Doulos joined the team of urban think tank Expodium together with Friso Wiersum and Bart Witte. In their own modest self-description, they are “a satellite at grass-roots level; framing local developments in global discourse.” Regarding Nightwalkers specifically, Nikos says, “I initiated it under the umbrella of Expodium which has become a project and methodology at the same time as an artistic practice, as means of reading the cultural landscape and at the same time embed ourselves within it.” Nikos’ interest in the culture of walking includes a huge range of walking practices, which he explores in the essay, Unnecessary walking. According to him, Nightwalkers is “a condition and a group dynamic at the same time.” It has been carried out in Utrecht, Amsterdam and Rotterdam; Incheon, South Korea; Budapest, Hungary; Belgrade, Serbia; Malmo & Umea, Sweden; and Helsinki, Finland, among others, and is “an event but also a constitution of bodies that attempt to read the cultural landscape at night – or the leftovers of the everyday – as constituted by nocturnal conditions.” Nikos emphasizes its inclusivity and points out that, “nightwalkers should be eager to address walking not just as leisure or a way to go from point a to b but as an explorative methodology.” 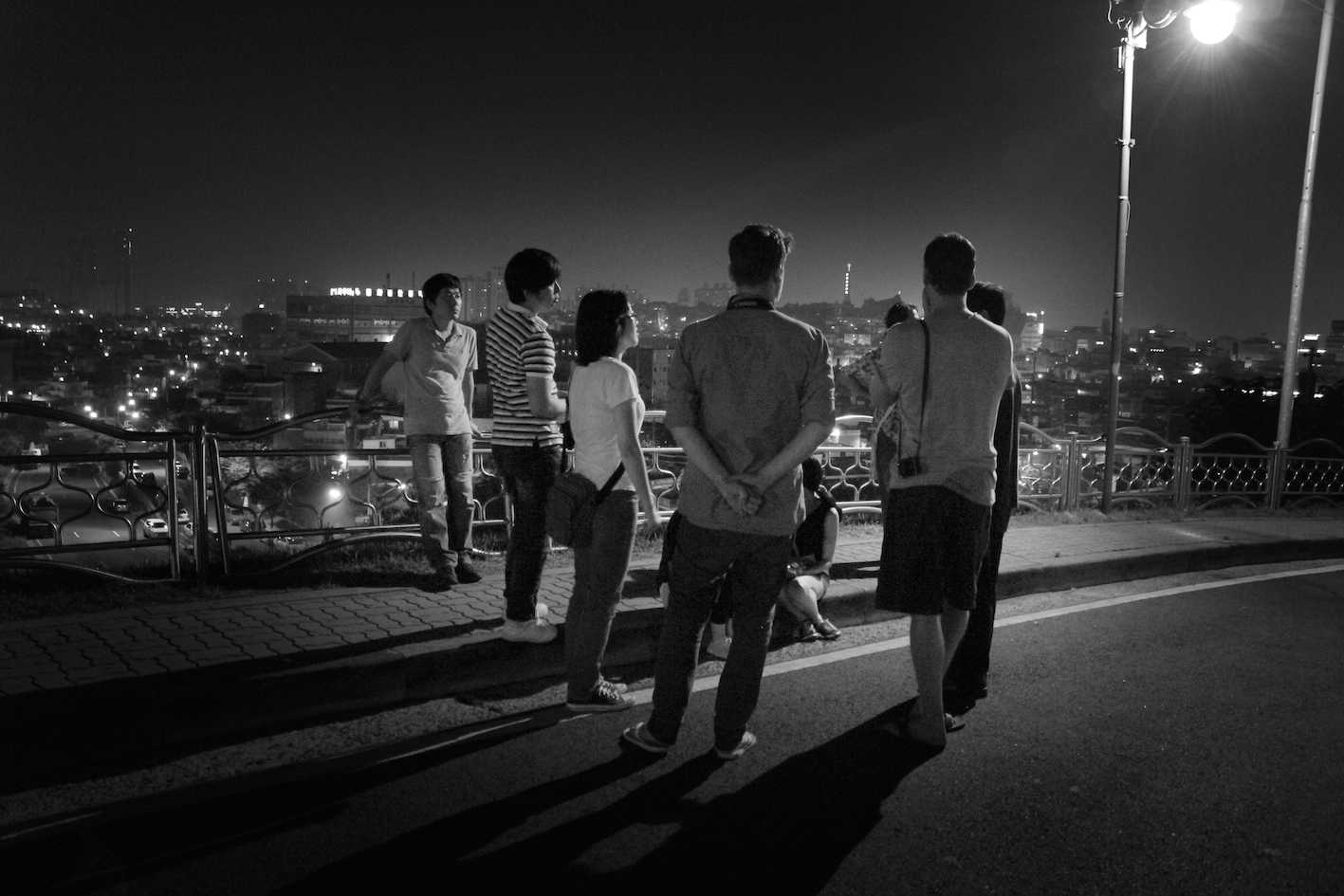 In Nikos’ work with Eva Fotiadi, the concept of ‘spatial justice’ has an important position: “Social justice is embedded in spatial justice because it occupies specific geographies. And all the challenges of the term justice can take various proportions depending on the socio-political foundations of a specific territory. In the case of Western Europe to a certain degree, it falls under the problematic of not having a more horizontal way, or not moving enough towards one (it’s not a top down process nor a bottom up one) of dealing with urban planning. It encompasses challenges of gentrification and ‘ghettofication’ and expands from issues of re-appropriation of public space to utopian thoughts on ‘temporary autonomous zones’.”

At DAI, the fundamental thing that changed Nikos’ practice was learning how to “investigate the transitory or ephemeral element of an artistic practice…I decided to operate on intervening in specific locales while questioning my temporal identity within these spaces and allow the work to be constituted in the future through multiple forms of expression (blog, print publications, lecture-performances).” His preconceptions about “the artist as an autonomous practitioner, working in solitude” also changed significantly.

In addition to his work with Expodium and “Un-making the Netherlands”, Doulos organized the discursive seminar WHAT NOW MY LOVE? (2015) set to function as a horizontal assembly of multiple voices stemming from and outside of the Academy of Fine Arts, University of the Arts Helsinki, along with a constellation of acclaimed and not so (yet) acclaimed examples of contemporary curatorial practices. “I’m trying to create conditions to generate knowledge through assemblies – where knowledge can be generated through spaces of conflict of participatory spaces. That’s what I consider to be an educational process in a broader sense (and what I try to do when I am in a teaching position such as at the University of Ideas or the University of the Arts in Helsinki ).”