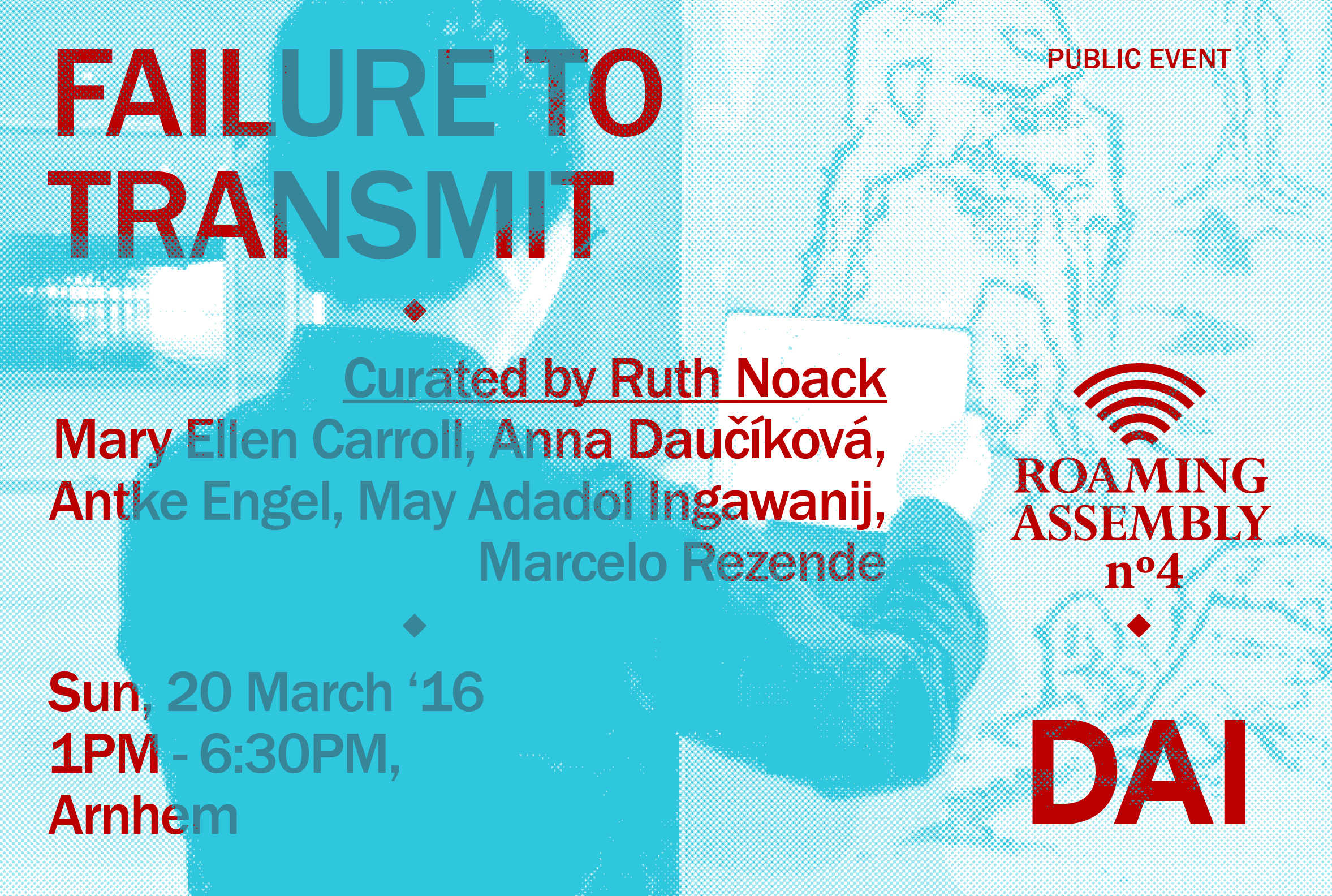 curated and presented by

With the participation of

~ free admission, no reservation needed for the symposium

After the event, around 19:00, a dinner (prepared by our amazing vegan chef Mari Pitkänen and her team) will be served at the theatre. Costs for visitors: € 10 for food & wine. If you wish to join the dinner as well you are welcome to make a reservation at dutchartinstitute@artez.nl (please note that seating is limited ~closing date March 14, 2016).

"Failure to transmit" takes the 4th iteration of the Roaming Assembly to the theater. The audience is invited to join us on stage in a play about one question: "What is non-transmittable form?" Invited experts, DAI students and guests will enact their roles and inhabit their ideas within the framework of a symposium setting. Symposia are fraught with rituals that reinforce hierarchies of knowledge. We hope that by bringing this to the fore via the setting of the play, a diversity of participatory practices can be made to count and a space can be opened up to enable a discussion of commonalities and differences regarding the experts' input. Read more

The Necessity of Not Understanding / 👍👍👍👍

To stop answering the ‘quality question in art’, the researcher Seth Siegelaub developed a framework that would qualify other people to make these decisions. This structure for distanciation was predicated on trust and paradoxically, it privileged the artist. It was not an algorithm designed to reinforce unanimity, as in the binary coded, jpegable system of today. Nor, was it the audition, wherein ideas are tried out by the institution or market—and based on the number of likes rather than the development of a genuine discourse, and lacking what the Kenyan writer, Yvonne Adhiambo Owuor refers to as the ethical imagination. Read more

What can really be transmitted and how may this look when a “Former Easterner” is speaking?

In our “Central European” debates, the West and East is not a question anymore. It seems it was put ad acta when someone named it Former East and Former West. But the questionable transmitting goes on. What exactly remains inexplicable in the constant “Brownian motion” of forms, ideas and images? Instead of vast geo/bio/political perspectives, we could take a look at an easy case of the un/transmittable: The “Let´s have a cup of tea!” situation.

Untransmittable form in the perpetual tension of the paradox

This talk takes the idea of the essay film out on a long, far walk. It wonders how the conceptualisation of subjective enunciation changes when dissociated from the standard conception of the essay film’s claim to value: the assumption of the personal – as individualised – voice. Ingawanij's companion in crime are the moving image works of artist and organiser Nguyen Trinh Thi, a leading figure in Vietnam’s contemporary art and founder of the documentary film and pedagogy collective Hanoi DocLab. Read more

Fifteen notes on identity and its drama

A tour through 500 years of chaos concerning the imbalance between essentiality and universality from the Brazilian perspective; and the Brazilian failure in convincing itself (and the world) that chaos is not the problem, but a chance. Maybe (as Lina Bo Bardi told us already) that could be what we need now… Read more