2015 - 2017 Isabelle Sully: " Just so that I’m sure you understand what is expected of you, would you please explain to me what you think we’re asking you to do?" 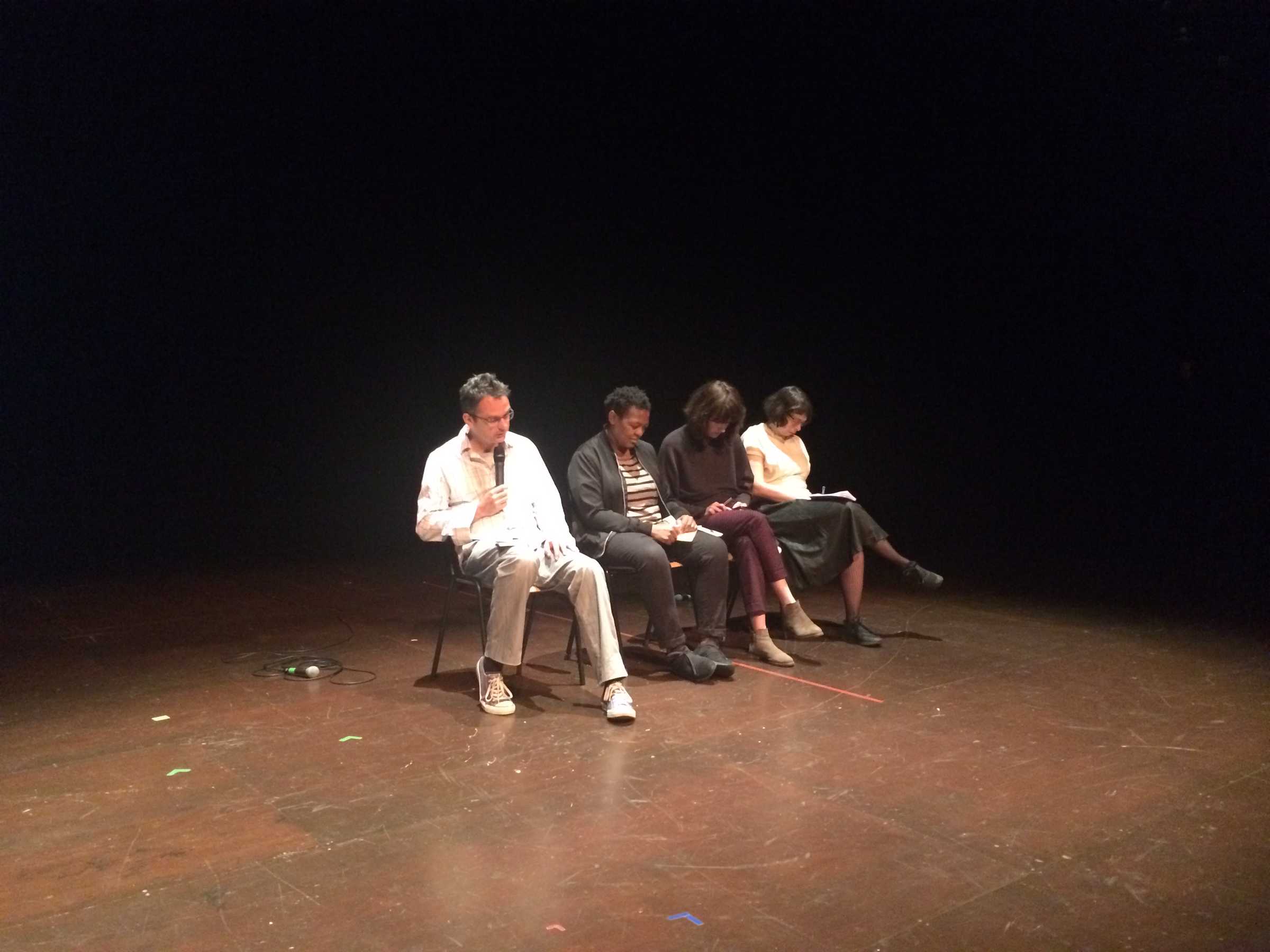 Isabelle Sully’s lecture performance begins in the dark with the audio recording of a phone call and what sounds like a personal anecdote about how her grandfather unknowingly made an agreement about his internet plan. The stage is minimally lit and the audience hears Isabelle’s voice reading out a legal-sounding contract, punctuation included. The “Terms of Agreement”, dated today, June 24, 2017 are read aloud as a team of five people begin to set up a camera-shoot. With precise choreography, the team moves around the frame they have set up, performing an interesting contradictory act of re-affirming Isabelle’s contractual relationship to the Dutch Art Institute and from which she is at this very moment disengaging. Her pre-recorded voice reading the agreement spells out the ways in which individuals are inscribed through the proper name and signature, while the agreement itself is a self-annulling text, questioning the authorial voice and the institutionalized subject as it dismantles both. Through the contract and choreography of writing, speaking and filming going on around it, Isabelle draws out the ways the school itself becomes a biography, and reflects on its potential for estrangement.

Ray Brassier began by recalling the components of the lecture performance, and was struck by the tension created by the two component halves: the focus on the mechanics of legal institutional inscription and a passage of theoretical writing about the individuation of the artists via the proper name. The tension between these two parts comes from the way the theoretical statement was rehearsed and “jarred with the second half” which dealt with the individuation of proper name and “involved an erasure of a ‘living singularity’.” Brassier remarked, “You were using the whole machinery of the institution. Your work as an artist has to be properly ratified by the institution in order to be transmitted to the world.” This second component half dictates “this is what is means to be an artist - to consent, “to give up the pretense of unique creativity”. For Brassier, this sounds “ironic and retrospectively naive compared to the first half of the piece.”

Gabi Ngcobo commented that she was uncertain about what was expected of herself or Isabelle, but she got the impression that she was asking her to do things differently: “to wobble frameworks of an institutional kind, to work with misunderstandings or embrace contradictions, to undo, to rethink punctuations.” She reiterated that she was not sure she understood.

Rachel O’Reilly remarked that this lecture performance prompted her to “think about corporate telepoeisis” in the way Isabelle was “setting out some kind of similarity between [her and her grandfather’s] experience.” O’Reilly asked, “What does your grandfather’s illiteracy in that experience have to do with your experience in art school?” She felt like that question could have been dramatized more and didn’t understand the apparatus of television filming, which seemed nostalgic and over-exaggerated to her. She concluded by asking what would have happened if the school’s website had been dramatized instead?

For Marina Vishmidt this lecture performance was “a question of moving the frame into the content - the conditions becoming content” and the framing of institutionalized practice. She was struck by the framing of administration and bureaucracy and “found that gesture to be structurally integral to the thinking of the whole piece, the paratext becoming text.” This referred to “the Derridian signature, the proper name - a kind of theoretical formalism which receives a second dimension.” She was interested in the moment Silvia stopped being a functional participant and became a performer, and saw the entire set-up as “exaggerated belaboring of the framing gesture.” Vishmidt remarked that she had been hoping for a less open ending.