The Sonsbeek Series ~DAI's independent platform for knowledge production and investigative discourse around the Sonsbeek-exhibition phenomenon. 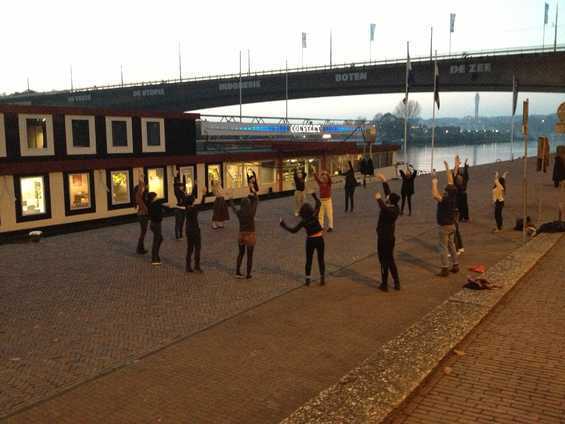 Image: DAI week November 2014 ~ session taking place under the Nelson Mandela bridge over the river Nederhijn in Arnhem. The words on the bridge belong to a text based piece by Swiss artist Rémy Zaugg (1943-2005), commissioned by Sonsbeek '93 and acquired by the municipality (photo: Jacq van der Spek)

The Sonsbeek Series ~ past & upcoming:

* The Sonsbeek Series: Session Nr.5 ~ Round table with representatives from artists collectives ruangrupa (curator Sonsbeek 2016) from Jakarta and Cráter Invertido from Mexico City as well as Arts Collaboratory, platform for transnational exchange and cooperation.

* The Sonsbeek Series: Session Nr.4 ~ SONSBEEK 2016 will proudly present its strategic vision and artistic direction for the upcoming edition of the SONSBEEK exhibition, opening on 4 JUNE 2016.

*The Sonsbeek Series: Session Nr.3 ~ Vesna Madzoski & Jelena Vesic. Documenta and Sonsbeek Out of Bonds: Jef Cornelis' documentaries and the spectacle of art

Introduction to the Series:

For a wide and interesting variety of reasons the legacy of Sonsbeek as a recurring art manifestation irregularly taking place in and around Arnhem's by now legendary landscape park of the same name, continues to excite local, regional and national cultural agents, policy makers and politicians just as well as art practitioners and aficionado's worldwide.

Recently the newly inaugurated Sonsbeek Foundation has taken the task upon itself of re-animating this unique 'machine' for cutting edge art explorations, to be performed in what is both a pastoral setting and an open, public space for the citizens of Arnhem and beyond.

At the DAI we consider the intended next edition, Sonsbeek 2016  to be an interesting case-study, unfolding in the very vicinity of our homebase and thus perfectly suited for scrutiny and critical analysis in the specific context of our curriculum.

With Sonsbeek 2016  the organizers and other stakeholders seek to position themselves in relation to the current global proliferation of large scale, temporary displays of art works in the public spaces of cities; sleepy, relatively small provincial towns such as Kassel, Limerick or Arnhem as well as dazzling metropoles like Istanbul, Shanghai or São Paulo. This remarkable (but not at all evenly spread) expansion of biennials, triennials, quadrennials etcetera plays an important role in the economies and (geo-)politics of the cities and regions involved as well as in the practices, lives and economies of art workers. For our students, who are the art practitioners of the near future and therefore, among others, tomorrow's proponents of the continuity and invigoration of civil society and the commons, it might be empowering, perhaps even crucial, to gain more critical understanding of the ways of the art world and how these always end up (for better or for worse) being incorporated in dominant discourses and power structures.

To this aim and as an integral part of our curriculum, we have devised The Sonsbeek Series as an independent platform for knowledge production and investigative discourse around Sonsbeek (2016 and beyond).

At their bests, these type of art events are thought provoking, meaningful, gripping and engaging testbeds for the potentialities and uses of art and art works in and of our time. Their integration in the 'contemporary condition' implies that such ambitious exhibition projects can not exist without funding by local, regional and national governmental bodies as well as by semi public, corporate and private sponsors. As a result of that dependency they are naturally prone to ideological instrumentalization of various kinds. The recent worldwide upsurge of political or quasi-political awareness among artists and curators has surrounded biennials and other non-commercial art events with lively and topical debates about the why, what, how and for whom. Today the inquiry into ethics has become as important as the aesthetic education of the public.

In the believe that intelligent and invested explorations can only contribute to greater commitment from various publics DAI's Sonsbeek Series will welcome students and everybody else who is interested to lively sessions at our makeshift auditorium, Kortestraat 27 in Arnhem, during which invited guests will speak from different positions.