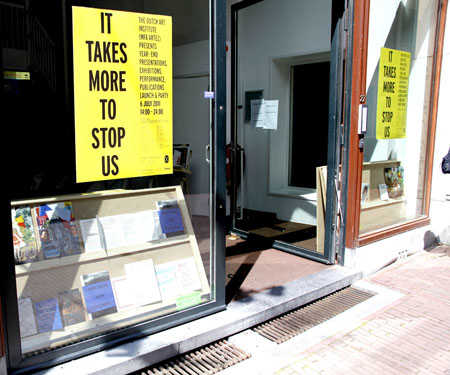 Each second-year DAI student is obliged to realize an artist’s publication as part of our graduation requirements. PRESSING ISSUES is 2011’s resulting collection of 14 artist’s books issued by the Dutch Art Institute (DAI) and designed in collaboration with the Werkplaats Typografie (WT). Our publication format (while very open) has a few basic requirements: in close collaboration with one or more guest writers, DAI students also team up with WT designers to produce an artwork in the form of printed matter. From very diverse perspectives they reflect on publishing as a versatile medium.

Beginning in October 2010, second year DAI students began to develop their themes and collect material. In a three month intensive process of writing and discussions / feedback, they shaped their ideas into a proposal. Development of this very result-driven project was judged at regular intervals throughout the year.

A second-phase of the project began in February 2011 when DAI students were partnered with designers from the WT. This led to challenging and often fruitful collaborations, whereby the Pressing Issues students were expected to clarify and prioritize key aspects of their work as they learned to communicate and articulate these clearly within the design process. Also in February 2011, the DAI students began to seek out writers, theoreticians, and practitioners whose own bodies of work, professional interests, and points of view were potentially interesting compliments or counter-points to the student’s own publication projects. The outcome of both the content development and the design process had to be approved by the project leader, Rebecca Sakoun and DAI Course Director, Gabrielle Schleijpen before printing.

PRESSING ISSUES contain an array of compelling and diverse artists' publications which reflect the eclectic and wide-ranging interests of the artists themselves, and vary in form and content from poster series, collected essays, the creation of fictional or alternative histories, a meditation on photographic reproduction, and documentary investigations, to interpretive literary translation and collage.

DAI and WT, both located in Arnhem are Master’s programs of ArtEZ, one of the major art educational institutes in the Netherlands. Gabriëlle Schleijpen, head of program at the DAI, founded DAI PUBLICATIONS in 2003. It began as an experimental and innovative research and publishing platform aiming to address the specific process of artist books production, it is now an acclaimed editorial project. Since its inception more than 90 artist books have been published. As of 2006 the series is supervised by an annually appointed editor, for 2011, visual artist Rebecca Sakoun. 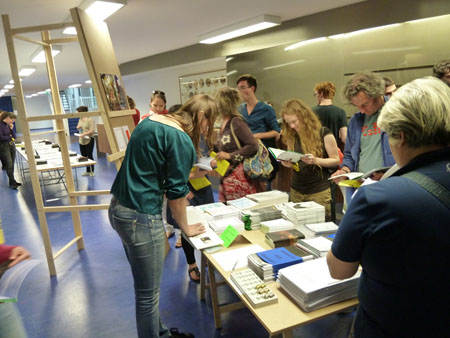 For the book titles and the names of the artists, designers and writers go here