Useful Art / from month to month 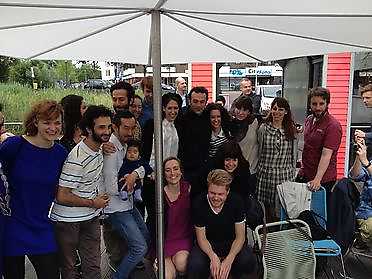 The artistic practice of Bik Van der Pol is collective, leaving the studio as a place of production and using the artistic workplace itself – practice – as the site of research and production. In this talk they will revisit a selection of past projects that have taken place within different contexts - be it public space, institutions or an art fair - and consider how those contexts have been used to different ends. By examining the different factors at play - from invitation to participants and audience, the talk will reflect on what determines artistic production outside the studio today.

Bik Van der Pol work collaboratively since 1995. They live and work in Rotterdam.
The talk is moderated by Nick Aikens and takes place within the context of 'Useful Art', a course run by Van Abbemuseum and part of the Co-Op Academy at DAI.

Diana Franssen, curator and Head of Research at the museum will come to Arnhem with Steven where they will have face to face meetings and listen to the first proposals of the students.

On Friday Diana will also show the students the archive, which she has worked on and with for 25 years.Christiane Berndes will talk about the collection.

The day in the Van Abbe will be the first session focusing on the final project of the Useful Art Project in DAI. The day will be broken up into three sessions - a review of the evening's talk the night before, a session led by Nick Aikens and one led by other Steven ten Thije.

The start of the day will be a a discussion on 'An Evening on Use' form the evening before, analysing the main areas of interest for the group.

Following the series of discussions and seminars in the Autumn, which sought to introduce students to the terms and frames of thinking around 'Useful Art', the focus will now turn to the final project in the summer. For this first session, students have been asked to bring something as the starting point for a discussion. This could be a work of art (of their own or an image). Students will be asked to talk for five minutes. From this the workshop will look at potential key areas or themes.

The purpose of the day is to begin to formulate some areas of thinking from which to develop. By the end of the day specific tasks will also be set for the next session.
There is the possibility to bring in Tania Bruguera and Charles Esche to discuss the day's progress.

17 January / Arnhem An Evening On Use with Tania Bruguera, Charles Esche and Stephen Wright

Stephen Wright: Usership
The theorist Stephen Wright will expand on ideas in his recent essay 'Here Comes Everybody: Towards a Politics of Usership', where he outlines the political, theoretical and artistic implications of 'usership' - for artists, institutions, audiences and political subjects. Wright suggests some speculative 'exit strategies' from which he sees as the outdated and restrictive conceptual edifices on which contemporary art currently rests. Stephen Wright is an art writer and teaches the practice of theory at the European School of Visual Arts (France). His current research focuses on the implications of the ongoing usological turn in contemporary practice.

Tania Bruguera: Arte Útil
Tania Bruguera will introduce 'Arte Útil', a term the Cuban artist has coined for forms of art practice that foreground affect and implementation over representation. Tania Bruguera is currently collaborating with the Van Abbemuseum, Eindhoven and the Queens Museum, New York on the Museum of Arte Útil, a multi strand project that will culminate in the old building of the Van Abbemuseum being transformed into the Museum of Arte Útil in Autumn 2013. Tania Bruguera is a performance artist born in Cuba. She is the initiator and director of Immigrant Movement International and of Partido del Pueblo Migrante.

'An Evening On Use' takes place within the context of 'Useful Art', a course run by Van Abbemuseum and part of the Co-Op Academy at DAI.

November 29, 30 / AT THE KUNSTVLAAI IN AMSTERDAM . With Charles Esche / Steven ten Thije: 1848 public presentation and discussion

The Public Uses of Art and its Histories'
Charles Esche, Annie Fletcher and Steven the Thije in conversation, moderated by Nick Aikens

The discussion will centre on the long-term research project of the Van Abbemuseum, 'The Uses of Art', examining the historical role of art and its institutions as a means to better understand their use for us today. 'The Uses of Art' aims to anchor our inherited art history in that of civil society, tracing it back to the civic revolutions of 1848, through war and social change up to 1989 and on to the economic crises of today. Here, the museum's curators will introduce the historical, artistic and political co-ordinates that are shaping the project. The discussion takes place in the context of the Van Abbe's 'Useful Art' course at DAI.

'Critical Regionalism', Van Abbemuseum, including visits to Eindhoven based organizations and workshop on 'Useful Art'

17.24 Train from Arnhem to Eindhoven

19.00 - 00.00 Closing Party - De Fabriek - Baarstraat 38, Eindhoven During the two days at the Van Abbemuseum we will schedule time to look at and discuss the current exhibitions as a group: David Maljkovic: 'Sources in the Air'; Piero Gilardi, 'Collaborative Effects'; 'The socks are not White', curated by Bik van der Pol', 'Time Machines: Reloaded' and John Baldessari, 'Video Works'.

Accommodation: Students will be staying at 3BE Back Packers Bed and Breakfast: Stratumsedijk 31 5611 NB Eindhoven, Netherlands / 040 212 0416

Participants in the project will join the AUTONOMY – PROJECT's 3rd (Summer)school on Use Value in Liverpool from October 8 to 12 / the Autonomy-project http://theautonomyproject.org/

Back to introduction Useful Art