Curating Academy / from month to month 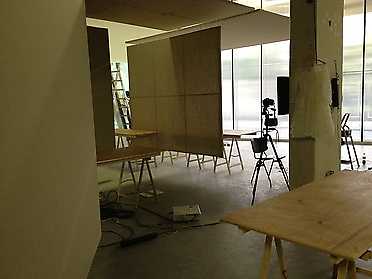 In May, curator Bart van der Heide is invited to give his response to the students' prototypes of works for the exhibition in September, together with Grant Watson, Frederique Bergholz and Tanja Baudoin.

For April's meeting at DAI, Grant Watson and Frédérique Bergholtz will be present to discuss matters of production and presentation regarding the upcoming DAI exhibition in September. The students are asked to formulate their thoughts on the exhibition and their work. The agenda set during last month's meeting, of location, press, publication, timetable, budget, public programme and title will be directing the discussion. Curating Academy is a yearlong course offered to second-year students of the Dutch Art Institute, that is taught by Grant Watson and Frederique Bergholtz and coordinated by Tanja Baudoin. The course looks into methodologies of curating and closely studies examples from the practice of tutors and guests. The project will work towards making an exhibition for September 2013, with a contribution by each student. In monthly meetings, tutors and guests will unpack the nature of the 'graduation exhibition' and explore ways of working and presenting together.

In February the students of Curating Academy will meet with Adrian Rifkin. He will be speaking about the ways he works with images when lecturing and the history of the methods of parataxis. Prior to meeting everyone in individual tutorials, Rifkin will ask students to introduce the practice of a fellow-student to the group. Afterwards, the students also meet with each other in one-on-one sessions to become acquainted with each other's work.

Adrian Rifkin works with film and cinema, classical and popular music, canonical art and mass imagery, literature and pornography. Until recently he was Professor of Art Writing at Goldsmiths. Rifkin's full biography, many of his essays, as well as his blog can be found on his website: www.gai-savoir.net.

The upcoming meeting will take the premise of the Kunstvlaai as a case study for curatorial process and presentation. Students will meet with Kunstvlaai curators Natasha Ginwala and Fleur van Muiswinkel to learn more about their curatorial concept and methodology. They will encourage students to explore the fair and will introduce us to several of the presentations at the Kunstvlaai. The group is asked to actively prepare feedback to the curators to be discussed with them at a later time.

In the afternoon the students have meetings with curator Laura Preston, who is currently Guest Curator at Portikus, Frankfurt am Main for 2012, and in 2010 founded a curatorial agency with artist Amit Charan to test the mode and duration of exhibition production. We will also meet with Susan Gibb, a curator based in Sydney, Australia. She recently ran the independent curatorial initiative Society.

Face to face meetings with Grant Watson and Frederique Bergholtz

Grant Watson and Frederique Bergholtz will continue the discussion started during last month's trip to Liverpool and ask everyone to share their current work in a 10 minute presentation to start collectively mapping the divergent practices of the group. They will then break up and come back to discuss together what they've heard, what are possible strands or themes - nothing that 'fixes' but rather a first impression of where we are at the moment.