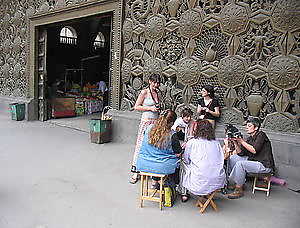 Over the last decade, the Armenian urban landscape and its visual culture have changed dramatically. The old city of Yerevan, the centre of the Armenian capital, is razed to the ground, the Soviet blocks are crumbling, and a new, foreign-financed Disneyland-like city is emerging.

In Yerevan today, the dreams and cultivated memories of the massive, empire-like Armenian Diaspora somehow intertwine with the remains of the wild Soviet experiments of the recent past, the withering utopian dreams of the previous century. In the background looms the mythical Ararat mountain, the impact of the recent war with Azerbaijan, the memory of the genocide, and a post-Soviet youth claiming a grip on its future are determining factors in Yerevan's new urban landscape. There is no city on earth where dreams of what has been, should have been, will be, and should be are so decisive a force of urban development and visual representation. The old city, a pre-Soviet residential area left untouched by Soviet city planning, was recently demolished.

Armenia Dreaming is organised by Partizan Publik for the Dutch Art Institute, Master Programme/ArtEZ Institute of the Arts, in collaboration with Vardan Azatyan and Sophia Tabatadze, and various institutes and individuals in Armenia, as well as in the Netherlands.

WHAT DOES THE PROJECT INCLUDE?

In preparation for the Armenia Dreaming project for the Dutch Art Institute, Partizan Publik organised a research trip to Armenia in January 2008.

Seventeen students took part in the first DAI day of the Armenia Dreaming project. Besides listening to three anecdotes about Yerevan, passages from Ali and Nino and Thomas de Waal's Black Garden, they enjoyed a lecture by Sophia Tabatadze and watched a documentary on the Armenian film-maker Parajanov.

In close cooperation with Expodium and Ricardo Basbaum's Casco, Partizan Publik developed the third day of the Armenia Dreaming project for students of Dutch Art Institute. This third DAI day, which took place in Utrecht on 17 April 2008, had intervening in public space as its theme. As such, this group of masters students, who are studying transnational projects, engaged with two local public art events as a way of preparing the event in Yerevan in May 2008. The art platform Expodium presented its Hoog Catharijne project; artist Ricardo Basbaum gave a lecture and presented Casco's Re-projecting Utrecht project.

Throughout the workshop that took place in Yerevan (May/July 2008) this project's intention was to build a visual archive of dreams and nightmares as a way of researching where Soviet and post-Soviet reality and fiction meet.