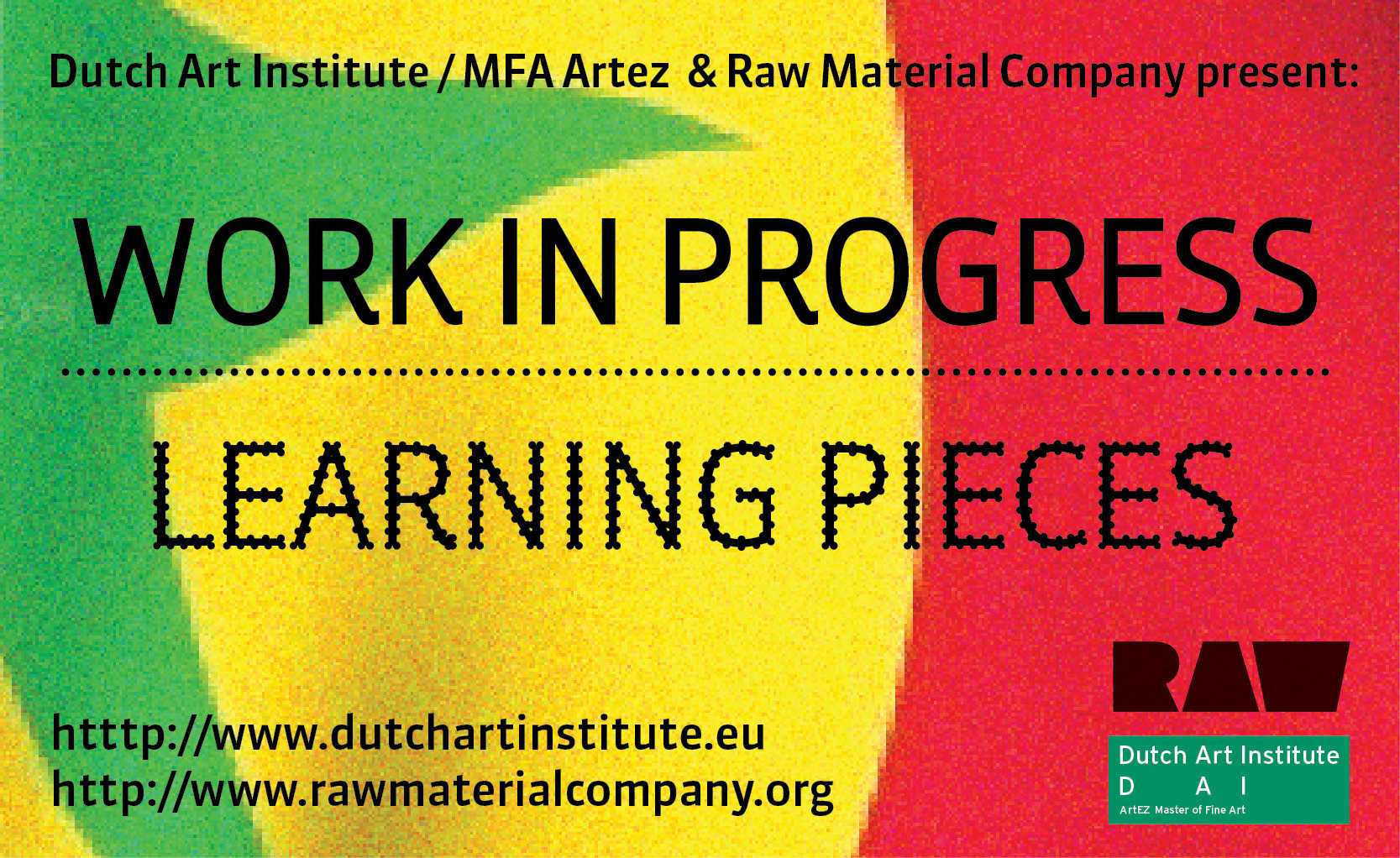 The Dutch Art Institute (DAI) connects art students to practitioners at the forefront of praxis worldwide. By initiating explorative associations DAI's research trips aim to promote a better understanding of the (art) world in transition. From May 3 till May 16, during the Biennale and Dakar OFF events the DAI teams up with colleagues in and around Dakar. Findings will be shared during a public presentation on May 14, organized in collaboration with Raw Material Company, center for art, knowledge and society that works to foster appreciation and growth of African artistic and intellectual creativity.

DAI's associate professor (and senior curator at INIVA in London) Grant Watson will moderate the discussion  around three projects:

looks at 'curation as artistic practice' in regard to local contexts, in-situ installations and digital technologies. This year it finds form and conclusion in the streets, landscapes and with the people of Dakar. Participants develop projects that include tourist attractions such as the controversial Monument to African Renaissance, where the ideological ownerships of imported monuments will be questioned. Traversing two worlds, a sound composition
will unite the distinct differences between Ile de Gorée, nowadays a Unesco heritage site that marks its importance as a monument for Atlantic slave trade, and the Dutch island of Goeree which it was named after. The presidential palace is not only the seat of government in Dakar but has become the site of citizens' self-immolation as a form of protest, which will be mapped through GPS and video interviews.

Negotiating Equity is curated and organized by Renée Ridgway and n.e.w.s.
http://northeastwestsouth.net

a performance project tutored by Ian White in collaboration with Emma Hedditch and Jimmy Robert, curated by If I Can't Dance I Don't want To Be Part Of Your Revolution  and coordinated by Tanja Baudoin. The project seeks to explore how 'theatre' can be understood from the position of artistic practice, to experiment with how such a set of interpretations might be of use within it. The project considers, occupies and enacts aspects of theatre and its operations – to consider the positions from which we speak, how we act, and what, through different frames, speaking and action might be. The trip to Senegal begins with a working period at the Ecole des Sables, a dance company and school for African dance, located in the coastal village of Toubab Dialaw. Here the students will work on developing a model of 'theatre' as the group has come to understand it through their work together and develop a series of 'performances' through which this model might be demonstrated.

will conduct its research in Dakar with the aim to investigate images that relate to the notion of publicness. The participants will question images that appear in the urban context and "re-read" them regarding their role in public life, politics and common identities.They will collaborate in this project with students from the Collège Universitaire d'Architecture in Dakar. To gain a deeper understanding of the city, architect Jean Charles Tall and artist Viye Diba will lead the group on city walks to read Dakar from their specific points of view.
Projectleader is artist Florian Göttke.

DAI invited artist, activist and and thinker Amadou Kan-Si to act as a respondent to the presentatations.

Special thanks for invaluable support to:

(with gratitude to Haco de Ridder and the  Mondriaan Foundation, upon whose invitation Gabriëlle first traveled to Dakar: http://orientationtrip2011.wordpress.com/about-2/)