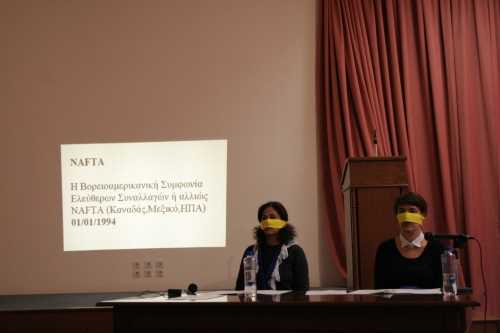 AULA INTERGALACTICA is a collaboration between Yota Ioannidou and Teresa Maria Diaz Nerio presented at the Athens Biennale 2011 curated by Kernel as part of the project Word of Mouth, Diplareios School, Athens, Greece, 22 October – 11 December 2011.

The ongoing project AULA INTERGALACTICA presents three performative lectures and an archive based on research on three different historical events, the protests by indigenous peoples’ in the Peruvian Amazon which is known as the Bagua massacre of 2009, the 9 hours movement starting in Canada and the UK in the 19th century and the life of Maria Pantazi, a greek anarchist, who was arrested and executed in 1871 in Paris after the “defeat” of La Commune. These events are narrated by two voices, the dead woman and nobody. They will be contextualized in relation to each other but most importantly in relation to their own historical “environment”, that is, the matrix from where they are coming from and therein the relationship between the one and the other.

Both Yota Ioannidou as well as Teresa Diaz Nerio are DAI-alumni.