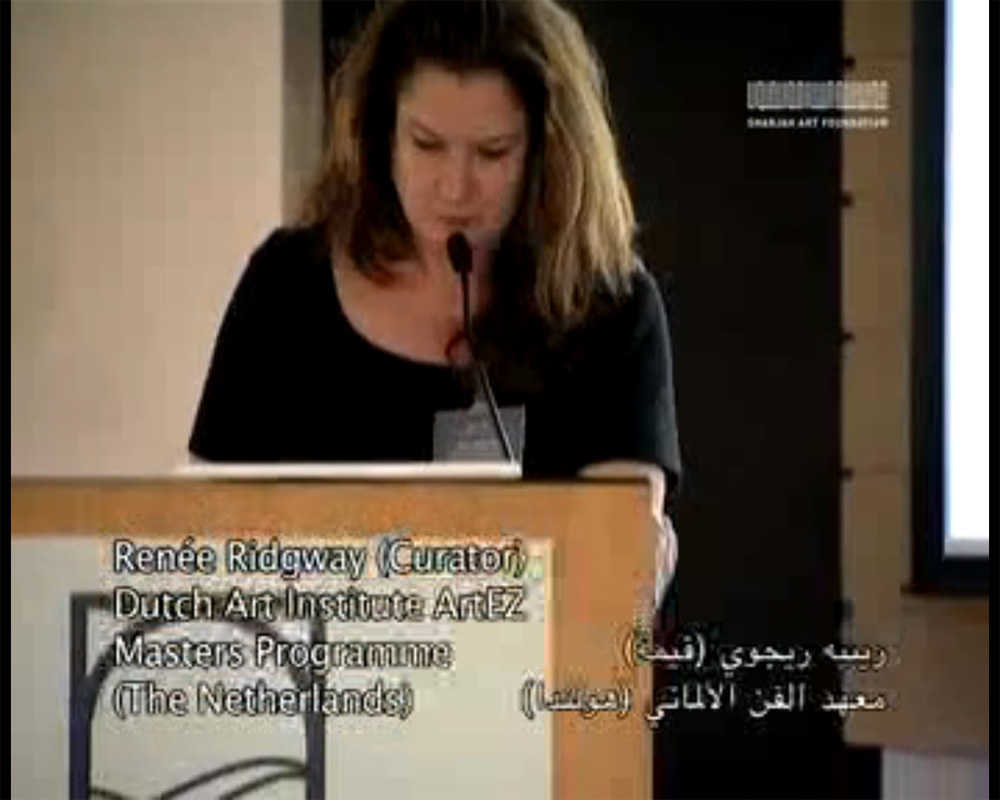 a project past ( Here as the Centre of the World) and a current/future project Space : the Final Frontier.

The Sharjah Art Foundation, in collaboration with ArteEast, presents the third edition of the March Meeting, an annual gathering of art professionals and institutions from the Arab world and beyond, from 13-15 March 2010. Nearly 50 art institutions based or active in the Middle East, North Africa and the region, as well as artists and independent curators will take part in the 3-day programme. The symposium will feature presentations by key speakers, colloquia, seminars and public talks. Since 2008, the March Meeting has provided a unique platform for institutions and individuals to present current and future projects, to network and seek out collaboration opportunities.

This year's edition takes a new and somewhat more experimental format. The emphasis over the last few years has been to bring practitioners in the Arab World together, with a view to encouraging greater connectivity, synergy and linking; this year's event seeks to anchor the growing web of relations to create more solid networks for partnership and collaboration. The programme for the March Meeting 2010 will allow participants to present projects, ideas, dilemmas and plans, with a view to developing a strong foundation for future collaborative ventures as well as mapping cultural calendar for the coming years.

The programme will feature a series of public talks by distinguished speakers, including the Moroccan scholar, art critic and author Abdelfattah Kilito and internationally celebrated curator and art critic Okwui Enwezor. For the first time this year, "Dardashat" - informal project discussions - will run alongside more formal presentations by institutions and art professionals. In addition, a newly commissioned film about the Sharjah Biennial 9, which traces a visual itinerary through the various projects, installations and activities of the past edition of the Biennial, will be screened during the opening. The main venue for this year's event is the Al Qasba, Sharjah, which encompasses both the Multaqa, a conference venue, as well as Shelter Maraya, a meeting point for creatives across all disciplines.

To coincide with the March Meeting, the Sharjah Art Foundation, in collaboration with the Sharjah Art Museum and the Directorate of Arts, Sharjah Department of Culture and Information, will be hosting a retrospective of acclaimed artist Tarek Al-Ghoussein, featuring both well-known works as well as a new photographic series.

For further information and programme details, please visit our website:http://www.sharjahart.org/